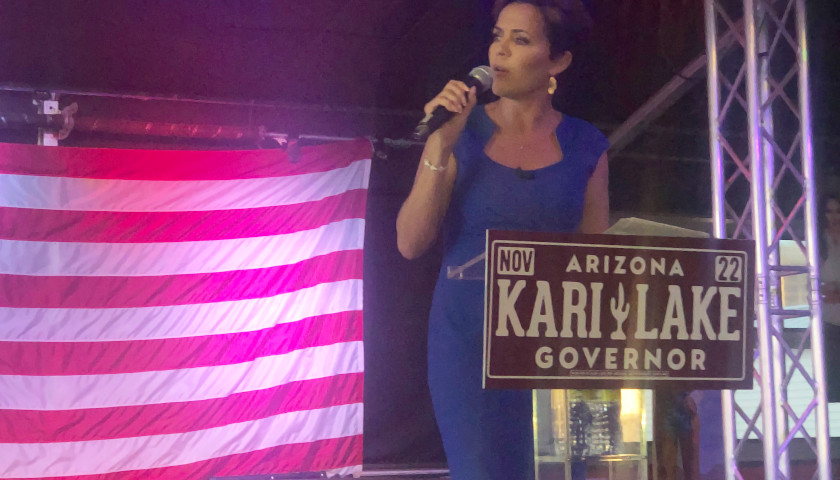 Trump-endorsed Kari Lake celebrated the one-year anniversary of launching her leading Arizona gubernatorial campaign Wednesday with a party. Still leading her Republican primary opponents by double digits, she told the crowd of her top supporters at the Pleasant Harbor Marina in Peoria, which she referred to as a “lakefront,” that the campaign has broken multiple records.

Lake brought the crowd to laughter multiple times, especially when describing her opponents. She characterized one of the other Republican candidates, Karrin Taylor Robson, by imagining “if John McCain had a baby with Liz Cheney, who grew up to marry a 95-year-old billionaire.” Taylor Robson is, she said, “frail, nervous; a RINO who puts millions into deceptive ads, trying to buy the election.” 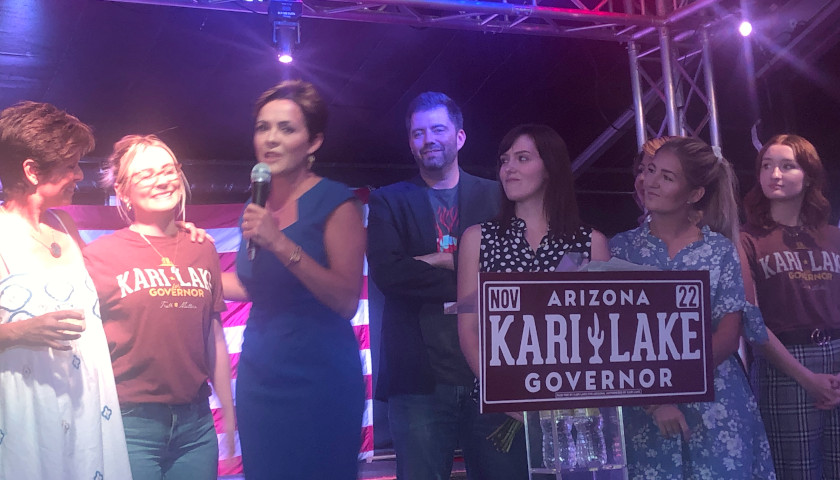 Looking back at the campaign’s successes and records, Lake said it took her only three weeks to collect enough signatures to get on the ballot; volunteers were enthusiastic about working for the longtime Fox 10 news anchor. She told attendees that, in contrast, candidates often take nine months to collect enough signatures, using paid signature gatherers. Lake’s campaign has 4,000 volunteers, the most of any candidate in the county other than Donald Trump’s campaigns. She raised more money than any of the other candidates, which The Arizona Sun Times reported on last week. Americans from every state have donated to the campaign, which is mostly funded by small donors, nearly 30,000 in total. She’s also had record attacks on her by the mainstream media.

Brian Glenn of Right Side Broadcasting emceed the event, telling the crowd that he too left the mainstream media. However, unlike Lake, who walked away, he was fired for attending a Trump rally and speaking critically of COVID-19 mandates and restrictions. He said when Lake becomes governor he will move to Arizona.

AWR Hawkins, Breitbart’s Second Amendment columnist, discussed how New York and California are trying to increase gun control even though they are already in the top-three most restrictive states in the country for that. He said they are looking to Canada for direction, where a bill to ban buying, selling, and importing of handguns has just been introduced. He said he would introduce an alternate version of Lake’s slogan, “Don’t California my Arizona,” spinning it into “Don’t California my Second Amendment.” He expressed concern that people fleeing higher-taxed and higher-regulated states will move to Arizona and try to implement their laws in the state. “We need a firewall here,” he said, declaring Lake can serve in this way.

Stephen Davis, a bodybuilder known as MAGA Hulk, told the audience how he left California for Arizona as a “political refugee” because it had become so liberal. “You only go to L.A. if you want to get shot,” he lamented. He said Lake is under attack because “the bigger the influence, the bigger the target.” He admires three things about her: She is, firstly, a firebrand; secondly, a defender; and, lastly, a leader. He said a lot of people are out to enrich themselves, narcissists who are out for themselves, but Lake is passionate to lead We the People. Lake is “a defender of morality, the rule of law, and the constitution,” he said.

Davis brought a Lake tweet about Taylor Robson in which Lake called her out for saying “We [America] have a history that none of us are all that proud of.” He said, “During the BLM riots Taylor Robson catered to the mob, apologizing for America.” He asked, “How many of you are sick of people apologizing for America?” The crowd cheered and clapped.

Lake relayed how she has lost friends over the past year due to becoming involved in politics. But they were “cowards,” she said, and she’s gained new ones instead “who would lie down and die for this country.” She said she met the woman who sang the national anthem at the event on a plane flight, noting that she nursed a coffee for three and a half hours in order to avoid putting on a mask. She said she didn’t know what AWR Hawkins’ initials mean, but suggested they might stand for “a** whippin’ Republican.” The Second Amendment is the most important one,” she declared, “It’s the only thing keeping us from being Australia or Canada.” 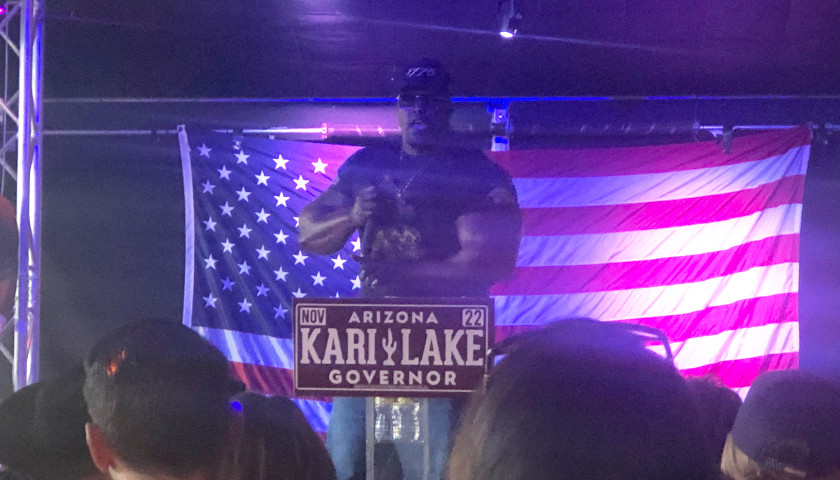 She asked the audience whether her Democratic opponent, Secretary of State Katie Hobbs, should be referred to as “Crooked Katie Hobbs” or “Commie Katie Hobbs.” The crowd indicated they preferred the latter. Lake said watching Hobbs run Arizona into the ground is part of the reason she decided to run for governor.

Lake briefly discussed the primary race. She said that once it had become clear there weren’t any America First candidates in the race, only “flawed career politicians, sellouts, and lobbyists,” Arizonans asked her to run. The Arizona Republican Party tried to put on a debate, but Lake was the only one who immediately agreed to debate; the others had issues. “How are these guys going to take on the fake news media if they’re too afraid to take on me?” she asked. “We need a fighter, not a coward. It’s the Arizona Republican Party, not CNN.”

She explained that “political consultants created these swamp creatures.” She didn’t hire a political consultant because they’re not America First, and they poll every issue and advise the candidates to run their campaigns that way. She covered Arizona for 27 years as a newscaster, she understands Arizona. She’s defeating her opponents because she’s got two things helping her be successful, she said: God is on her side, and she’s had to work for everything her entire life; as the youngest of nine children, she learned how to fight for toothpaste and shampoo.

“The fake news media can’t stand that a Trump Republican is running and winning in Arizona,” she said, laughing, adding that she’d been advised a year ago not to talk about fraud in the 2020 election, to avoid speaking critically about COVID-19 issues, and to distance herself from Trump. She fired that advisor, who, she said, “wanted me to avoid every issue that matters.” Instead, she went down to the Maricopa County independent audit. “I know that someday that evidence will make it into a court of law,” she predicted. She believes her activism here has “helped steer conversation nationwide.”

“Stolen elections have deadly consequences,” she declared, citing the death and crime on the border as the result of Joe Biden becoming president. “The illegitimate president in the White House doesn’t know what he’s doing.”

She concluded by declaring that it’s time on Nov. 8 to “drive the Marxists out of the state. I gotta beat the RINOs so I can save Arizona,” she said. “It’s time to replace the disgusting McCain swamp with a Lake.”