Hoffman on Arizona: ‘We Are a Much Redder State than People Give Us Credit For’ 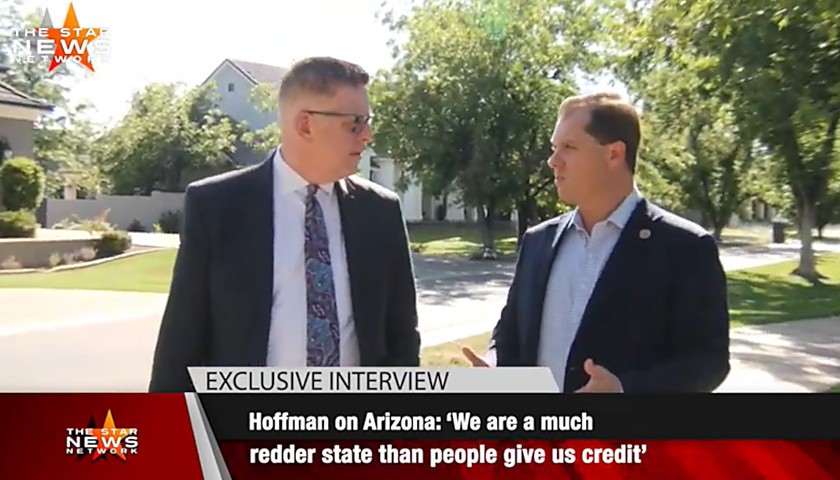 Neil W. McCabe, the national political editor of The Star News Network, interviewed Republican State Representative Jake Hoffman (AZ-12), the founder of the Arizona Freedom Caucus, in the state’s House of Representatives, concerning the lay of the land for conservatives in the Copper State.

McCabe: Arizona’s electoral votes went for Joe Biden in the 2020 election after five straight Republican victories in the state. Arizona GOP State Representative Jake Hoffman told The Star News Network and The Arizona Sun Times the state of play today for conservatives in the Copper State.

Hoffman: They say that right now we’re a purple state in Arizona, but the reality is that we’re much redder than people give us credit for.

McCabe: Hoffman, who is now running for State Senate, said although the GOP majorities are tight in the legislature, they are holding together to get the agenda done.

Hoffman: Now those are being done with the slimmest of majorities on the Republican Party in the legislature, but our state is a very conservative state.

McCabe: Despite the challenges of the 2020 election and its aftermath, Arizona, compared to other states, is a leader in putting conservative laws on the books, he said.

McCabe: The conservative said the real test is this November.

Hoffman: The prospect following the 2022 election actually is very bright for Arizona. Our State House is going to get more conservative, not less.

McCabe: Hoffman’s congressman is Republican Andy Biggs, a former chairman of the House Freedom Caucus on Capitol Hill. The state rep said he took inspiration from Biggs to emulate the success of those House Conservatives.

Hoffman: Myself and a few other members of the Arizona House formed the Arizona Freedom Caucus earlier this year to make sure that we have the most aggressive agenda possible, because of the threats that are facing our country right now, the threats that are facing Arizonans right now – they’re existential in nature, right? And they’re not just one or two. They’re coming from 40 or 50 different directions, all at one time.