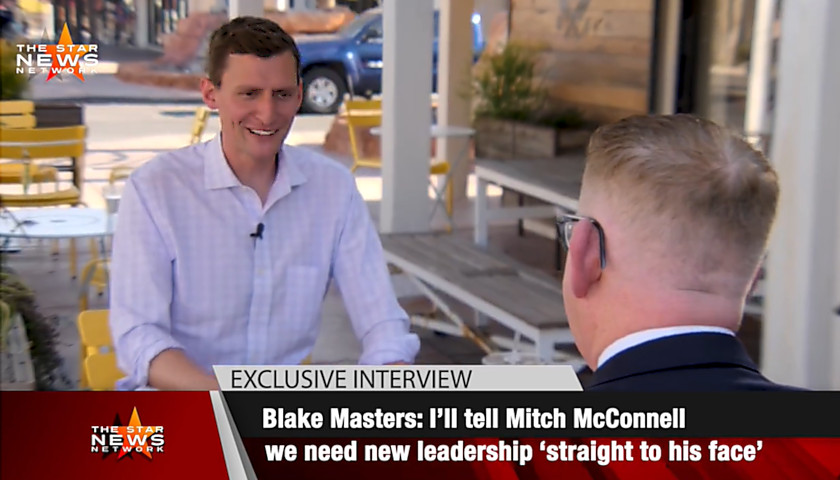 Masters told The Star News Network that he wants to first defeat Democrat Senator Mark Kelly, and then when he gets to Washington, he will tell Kentucky Republican Senator Mitch McConnell that Senate Republicans need new leadership – and says he will tell it to McConnell straight to his face.

McCabe: Of the three most competitive Senate races this cycle, Georgia, Nevada, and Arizona, only Arizona has a competitive Republican primary.

Blake Masters, one of the leading hopefuls in their primary, told The Star News Network he does not want Kentucky Senator Mitch McConnell to return as the GOP leader in the upper chamber.

I’m also very honest with my voters and I tell them that McConnell may get one more shot as majority leader because I’m not sure anyone’s going to run against him. I can’t my first year in the U.S. Senate. I’d love to vote for Josh Hawley or Tom Cotton as a majority leader.

McCabe: Going into the 2022 midterm election, the Senate is divided evenly, with both Republicans and Democrats caucusing with 50 members.

If the polls are correct, it is very likely that Republicans will regain control of the Senate this cycle. And for the ninth time since the 2007-2009 session of Congress, McConnell will once again stand to be his party’s leader.

Despite his hostility to President Donald J. Trump and his policy of opposing Conservatives in the primaries and on the Senate floor, Master said he appreciates that McConnell has had some wins.

Masters: I mean at least he blocked Merrick Garland, right?

Masters: Once I do beat him, I’ll be able to show new energy and new fight in the U.S. Senate, and that’s why it’s important to run. We’ve got to get some new leadership in office.

McCabe: Then once he gets to Washington, he can work to change how Senate Republicans operate because, under McConnell, they have never truly been on the attack, Masters said.

Masters: Mitch isn’t bad about everything. He’s good at judges. He’s good at blocking some Democrats. Right. But I only want to vote for a majority leader who is serious about going on offense and taking back ground from the progressive left and actually legislating this America First agenda. And I’m happy to tell Leader McConnell that straight to his face.