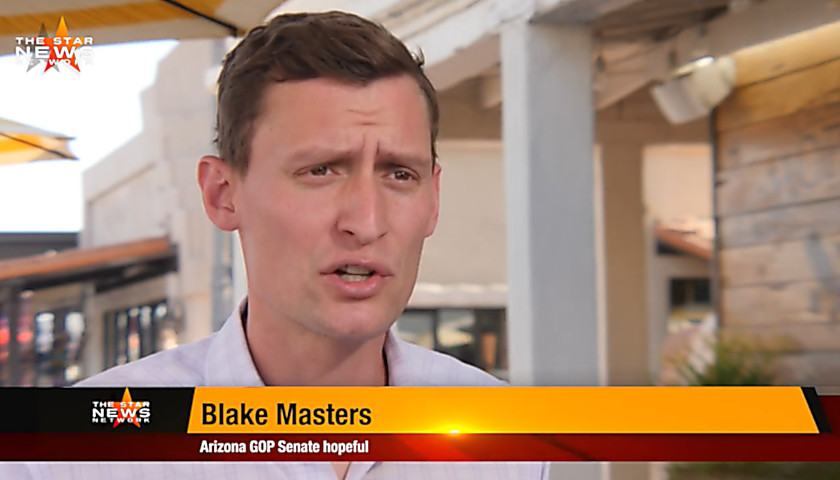 Masters said Brnovich was derelict because he is a ‘political hack’ – he ignored problems with the 2020 election, helping President Donald J. Trump lose to Joseph R. Biden Jr., so he could run for Senate in 2022 with a Democrat in the White House.

McCabe: Blake Masters, one of the leading candidates in Arizona’s August 2nd GOP Senate primary, told The Star News Network why he believes one of his opponents, Arizona Republican Attorney General Mark Brnovich, did not secure his state’s 2020 election.

Masters: I actually think that Mark Brnovich, the attorney general in Arizona, I think he wanted President Trump to lose in 2020.

McCabe: The former President of Thiel Capital said Brnovich was gaming the election so that he could have a smoother path for a Senate run in the 2022 midterms.

Masters: I think it’s because Brnovich is a selfish career politician. Okay, he wanted to run for office in 2022 because he’s termed out of being AG and he knew – he’s not a dumb man, he’s just kind of a political hack, but he knew that you do better in an off-year.

McCabe: After the 2020 election Brnovich acted like a man rejoicing over Joe Biden’s reported win in Arizona.

Masters: He said he wanted Joe Biden [to win] so that he could try to win office in 2022. And I know this because he went on Fox News days after the 2020 election while Arizona was still counting ballots.

McCabe: Even after the election, the Arizona Attorney General has not acted on the findings of the Maricopa County audit, nor any of the other exhibits of proof of election irregularities in the state, Masters said.

Masters: He’s had evidence for months. The State Senate, God bless them, they did an audit and they dumped all those results on Brnovich’s desk.

McCabe: Speaking more broadly, the graduate of Stanford Law said voters are still always approaching him with their concerns about 2020.

Masters: People come to me and they say, Blake, doesn’t Brnovich watch this? Why isn’t he prosecuting anybody? What’s he doing? Why don’t they care about us? And it’s really frustrating to hear, but I agree with them.

The 2020 election was not free and fair. I have a big problem with it. We have to get to the bottom of what happened. Otherwise, there’s no election integrity.