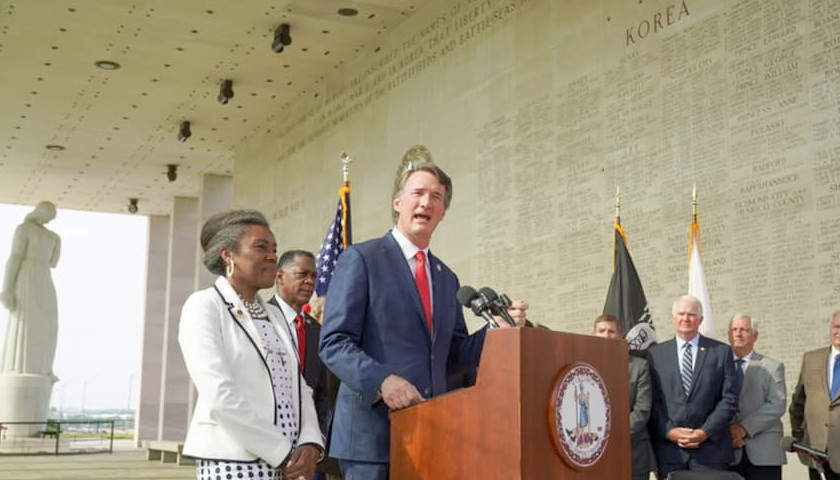 “It’s a powerful statement: 23 bills were passed unanimously,” Youngkin said. “I want to thank our veteran caucus for all the work that you do in order to make sure that our veterans are taken care of. These 23 bills are just the beginning. When the time comes for service members to retire, to turn the page on the next chapter of their life, we want them to make their permanent home in Virginia.”

In her speech, Earle-Sears, a Marine veteran, explained, “We don’t do these bill signing ceremonies because we want you to bake in the sun, but because we want to specifically call attention to those acts of the General Assembly that so greatly talk about the things that are worthy, worthy of public notice. And in that vein, we thank our legislators, our members of the General Assembly, who put forward these pieces of legislation to honor that service and that sacrifice, all the way the from the help for disabled veterans, help for their businesses, childcare, even the recognition of the spouses that have come alongside the veterans.”

“This of course helps to attract and retain those veterans here to Virginia, because we still need the discipline they bring. We still need the talents, capabilities, the respect,” she said.

“Throughout history what we’ve seen that’s so remarkable about the men and women that have served is they oftentimes leave their hometown. They go overseas to a country they don’t speak the language and they don’t know the people. They lead and they die so others can live, on the altar of freedom. They don’t seek money. They don’t seek power, and the only land they ever seek is a place to bury their dead. It’s a military force unlike any other. Virginians have always been part of it,” Miyares said.

Eric Burk is a reporter at The Virginia Star and The Star News Network. Email tips to [email protected].
Photo “Glenn Youngkin” by Glenn Youngkin.