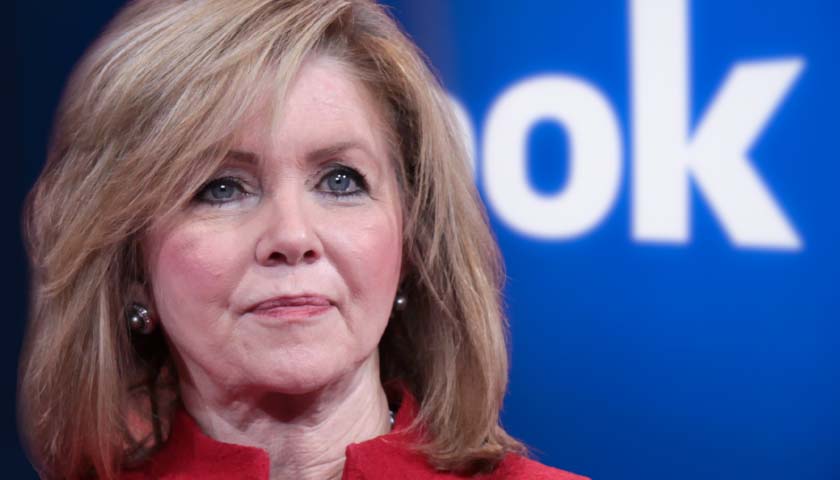 According to Friday reports, Sen. Marsha Blackburn (R-TN) was censored by Facebook for a post about biological males playing women’s sports.

“Biological men have no place in women’s sports,” Blackburn reportedly said on the social media giant, linking to a fundraising page.

Facebook then notified her that the post did not meet “community standards,” and that it was essentially muted. Nobody but the senator would be able to see the post.

“Big Tech and the Democrats are colluding to radically transform America,” Blackburn told Fox News. “They want to silence and censor conservatives for speaking out against their woke agenda. It does not take a biologist to know the difference between a man and a woman, and I will not be silenced or threatened by Silicon Valley oligarchs. Biological men have no place in women’s sports.”

The senator has often discussed the issue on Twitter, another Silicon Valley titan.

“It shouldn’t be up for debate. Biological men should not be allowed to compete in women’s sports,” she said in March.

It shouldn’t be up for debate. Biological men should not be allowed to compete in women’s sports.

“Democrats and the left-wing media think you are radical for wanting to keep biological males out of women’s sports,” she said in April.

Democrats and the left-wing media think you are radical for wanting to keep biological males out of women’s sports.

Blackburn’s office did not immediately return a comment request from The Tennessee Star.

Jackson said she could not define the word because she is not a biologist.

In response to that line of questioning, which made headlines nationally, Sharon Gentry of the Metro Nashville School Board was caught on a hot microphone suggesting that she wanted to set Blackburn on fire.

The senator’s Facebook post is a continuation of an ongoing debate in the United States about whether transgender women – biological men – should be able to compete in women’s sports.

That law says that “a student’s gender for purposes of participation in a public middle school or high school interscholastic athletic activity or event must be determined by the student’s sex at the time of the student’s birth, as indicated on the student’s original birth certificate.”