Palin Stumps for Perdue in Georgia 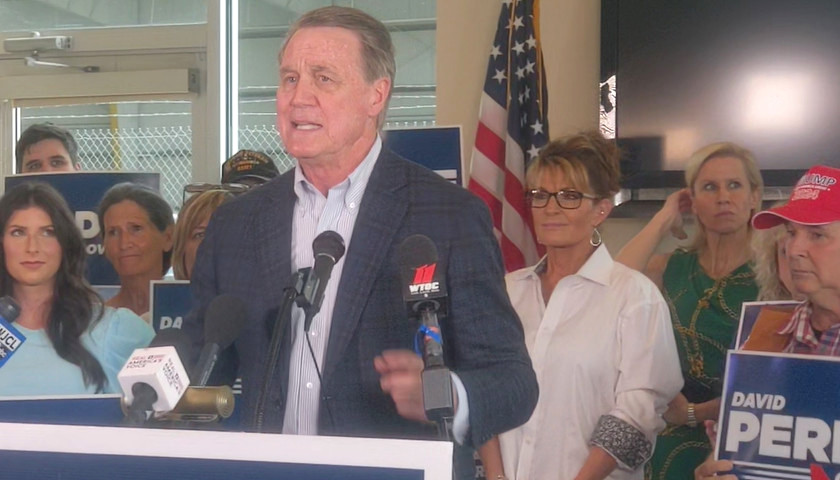 SAVANNAH, Georgia – Former Alaska governor and vice presidential candidate Sarah Palin, a Republican who is currently running for the U.S. House of Representatives in Alaska, joined former Sen. David Perdue (R) at a rally in the closing days of his primary election race.

“The position of governor is so very important when we talk about election integrity, and that should be first and foremost on everyone’s mind what we can do to ensure the integrity in our elections,” Palin said at the rally. “You cannot exercise Democracy within a Republic when you don’t have the fair elections that the electorate deserves.”

Perdue is running on a platform that is heavily focused on election integrity.

He has been endorsed by former President Donald Trump in his run against incumbent Gov. Brian Kemp (R). Trump has often lambasted Kemp for what he views as a lack of effort to investigate voter fraud in Georgia during the 2020 election.

“Of course, David Perdue – with his priorities being truth and letting the people’s will be first and foremost on his agenda is so important,” Palin said. “Kemp had an opportunity to do something about the shenanigans going on in this past election. I don’t know why he was so hesitant, [and] why he just kind of went along to go along. That’s unfortunate, and we can count on David Perdue to do the opposite of that.”

Calling Perdue a “leader of the America First movement,” Palin encouraged the electorate to “do its job” and get out to vote for Perdue on Tuesday.

“Georgia is going to be on the mind of, collectively, the United States of America,” Palin said. “Everybody’s going to be watching what happens on Tuesday. So, you have the right candidate here in David Perdue. It’s my absolute honor to get to be just a little, tiny, tiny part of this – to lend whatever support I can, and hopefully help the cause and not hurt the cause.”

Perdue said the same about Palin before introducing her to the crowd.

“It’s an honor for me to have the ex-governor of Alaska here, who is running for Congress in Alaska,” Perdue said. “She’s come 5,000 miles to be down here today. It’s about as far as you can go and still be in the continental United States from Alaska to Georgia.”

“This is a race between people and politicians,” Perdue said. “I’m an outsider. I had a 40-year business career. I ran for the United States Senate in 2014 to help change the direction of the country, and thanks to Donald Trump we did that.”

He said the Democrat Party platform has failed repeatedly.

“Two million illegals, runaway inflation, five dollar a gallon gasoline down here,” he said. “We’ve lost our energy independence. We know we can’t keep going down this road. This governor’s race right now will determine whether or not we have a conservative Republican in the White House in 2024. It will also determine whether we get the Senate majority back. Right here in Georgia, this Senate race will determine that, I believe.”

Perdue later took questions from reporters, including questions about a now-debunked NBC story that claimed that Trump had ended his support for Perdue, and given up on the race.

“This is what the fake news and Washington really wants,” Perdue said earlier Friday of the news report. “They want our guys not to come out and vote. This is another ploy of the left that I think is really trying to discredit President Trump. He’s still all-in on this race. He always has been. He’s gonna do another tele-rally for us this weekend, and probably Monday night.”

“This is what happens in politics, though,” Perdue said. “Fake news wants to talk about something that’s not true to try to influence voters. Look at what the fake news has said about election fraud in Georgia. Nobody has disproven any fraud here yet.”

Polling shows that Perdue trails Kemp significantly, but if Kemp does not receive 50 or more percent of the primary vote, it will trigger a runoff election between the top two primary vote-getters.