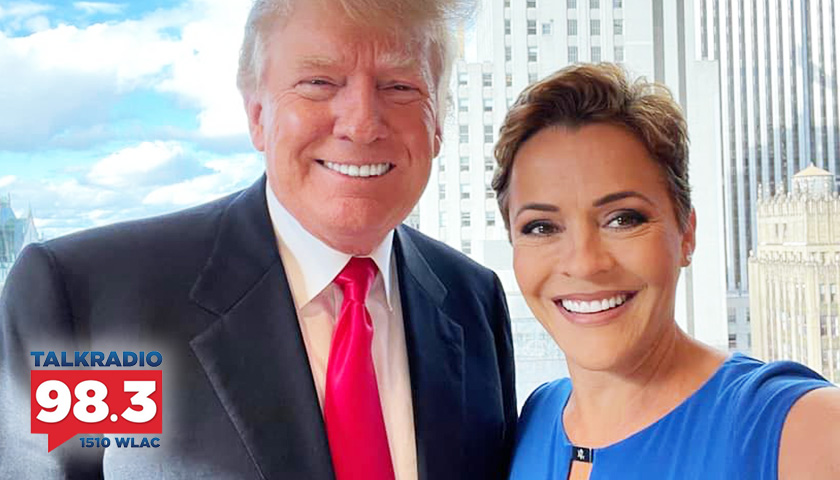 Live from Music Row Friday morning on The Tennessee Star Report with Michael Patrick Leahy – broadcast on Nashville’s Talk Radio 98.3 and 1510 WLAC weekdays from 5:00 a.m. to 8:00 a.m. – host Leahy welcomed gubernatorial candidate for Arizona Kari Lake to the newsmaker line to talk about her common-sense approach to fixing the southern border and local media’s corrupt and biased coverage of her character.

Leahy: We are joined on the newsmaker line right now by Kari Lake. The leading contender for the GOP nomination for governor in Arizona, endorsed by former President Donald Trump, a former broadcaster for well over two decades at the Fox News affiliate in Phoenix, Arizona. Welcome back to The Tennessee Star Report, Kari!

Lake: Good morning! It’s great to be here again. I was just endorsed by Marcia Blackburn by the way, your own Senator.

Leahy: When did that happen? Breaking news?

Lake: I know, it was earlier actually it was last week. I put it out this week. I’m really excited about that. She’s a legend.

Leahy: Kari, we have been following your campaign. Of course, we have our own Star News Network, The Arizona Sun Times that’s been out there for about a year and tracking your campaign. We sent our national political editor, Neil W. McCabe, to one of your events last week, for exclusive interviews with you.

Very compelling. And then previously the week before our own reporter in Georgia. You went down to Georgia and we did some interviews with you there.

We find there’s a lot of similarities between what’s going on in Arizona and in Tennessee, about the same size, population-wise. By the way, are you calling us from Arizona, where it’s zero dark hundred, or are you traveling around the country today?

Lake: (Chuckles) I wasn’t going to mention I just woke up about five minutes ago. The sun is up, but I am calling from Arizona and it’s about 5:20 am.

Leahy: Talk about discipline. Thank you for getting up so early. But of course, as a former broadcaster, you are, I think, used to these unusual hours.

Lake: Yes, I worked in television for 27 years, so I know punctuality. It’s like you got to be on when the news is on. You can’t be showing up five minutes late.

Leahy: So let’s talk about the news in your campaign out there in Arizona. We opened up The Arizona Sun Times there about a year ago because when we looked at around the country and we saw Arizona very important growing state, we saw a state that has some elements in common with Tennessee.

Lake: I do. It is the boldest and most aggressive border plan we’ve ever seen in this country. But we’re at a time when we need that because our border is wide open. The cartels and narco-terrorists have operational control and they’re wreaking havoc on not just Arizona, but the whole country.

We’re seeing people come in, just a constant flow of people coming across Arizona. When you go down there, you’re shocked because the minute you get there, you’re witnessing it. People walking across in groups, one group after the next.

I think it was five and a half tons that were confiscated last year in the southwest sector. Now, anybody who knows a thing or two about the cartels know that they’re only going to let so much of it be confiscated.

The rest is getting through. So five and a half tons would kill every man, woman and child in America several times over. That’s what we’re confiscating. Imagine what’s getting through. And I look at this as a weapon of mass destruction. It can kill that many people.

I’ve talked to parents whose kids have taken one, what they thought was a Xanax tablet or, you know, a Percocet or something like that and it turns out to be a counterfeit laced with fentanyl.

And they die after taking one tablet. We’ve got a crisis on our hands and we’ve got to shut the border built, finish President Trump’s wall, put our armed Arizona guard on the border, and ask other states to help send their guard.

And we need to stop these cartels in their tracks and stop them from bringing the drugs across. And my plan calls for blowing up the drug tunnels and shooting down the cartel drones, which right now are just doing their thing at the border, and no one’s stopping them.

Leahy: Kari, that just sounds like common sense. Explain this to me because it seems fascinating. You spent more than 20 years as an anchor on local Phoenix News. You were the most popular anchor there for decades.

But now, with the exception of our own Arizona Sun Times and our lead reporter there, Rachel Alexander, and our new reporter, Neil Eric Jones, a graduate of Grand Canyon College, everybody in the media there is far left, and they’re doing everything possible to attack you. How did that happen?

Lake: I’m calling them out for what they do. And by the way, I’m so happy to have The Arizona Sun Times. We have very few news outlets that are even slightly fair, and the rest are just outrageously leftist. And they’re pushing an agenda. And that’s why I left my career.

I started to see that even the corrupt news media was really pushing a complete agenda, a narrative and propaganda. And I did not want to do that. I got into being a journalist to tell the truth. But they’re upset I’m calling them out.

This was a couple of weeks ago, and they never ran it. Why? Because I made too much sense and it didn’t fit their narrative. They’ve been calling me angry politician, a rage politician and I’m like, that’s not who I am.

Leahy: You don’t sound very angry to me, Kari. You sound like a nice, sane person to me. (Lake chuckles)

Lake: I am and I’m bringing forth solutions to our problems and I call them America first solutions. They’re really solutions that will help every Arizonian, whether you’re Democrat, Independent, or Republican. So I’m driving them nuts because my ideas make sense. There are ideas that will work but they can’t allow me to get more popular than I am.

We’re going to secure our border, we’re going to reform our corrupt elections and the crooked press down here. The rotten to the core media is not going to stop us and they’re not having any effect with these hit pieces because I just found out my poll numbers go up and get more popular with every hit piece.