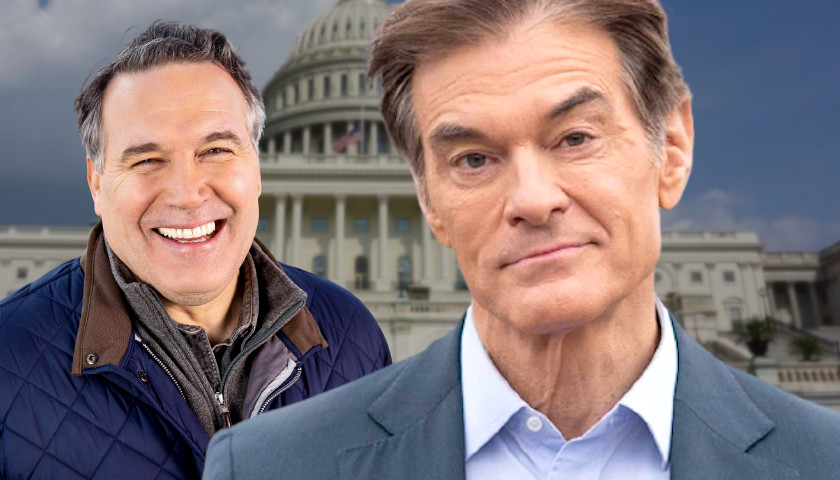 As of Wednesday afternoon, Oz leads McCormick by 1,610 votes out of more than 1.3 million votes cast for GOP Senate nominee in total. Oz has 410,822 votes, or 31.29 percent of the vote, while McCormick has 409,212, or 31.17 percent. The insurgent candidacy of veteran and political commentator Kathy Barnette gained 323,700 votes, or 24.66 percent, while four other candidates split the rest of the vote.

Oz, who lives mere minutes outside of Philadelphia, enjoyed an advantage along the eastern edge of the Keystone State. McCormick, who lives in the Pittsburgh area, dominated in the state’s west, central and northern regions.

According to the Pennsylvania Department of State, about 33,000 mail-in and absentee ballots remain uncounted. After all votes are tallied, if the gap between the two top vote-getters is within 0.5 points, a recount must occur by law.

Prospects for McCormick erasing Oz’s lead and winning the nomination look substantial at this point, insofar as several thousand mail-in votes still need to be counted in the former’s home county of Allegheny.

Oz ran with the support of former President Donald Trump and attacked McCormick for his globalist record on China and international trade as a businessman and as undersecretary of the Treasury for international affairs under George W. Bush. Barnette tried to appeal to the Trump base as well and stressed the consistency of her conservative policy views, but she would undergo severe scrutiny by Fox News’s Sean Hannity, an outspoken Oz supporter.

“Let me put it very simply here,” Hannity declared days before the primary. “I don’t see any scenario where Kathy Barnette can win a general election in Pennsylvania.” The talk show host cited a number of tweets that the candidate had issued that were hostile to homosexuals and Muslims.

At one point, Barnette wrote that former President Barack Obama “loves all things homosexual” and “supports all things Muslim.” She also called for Islam to be “banned,” directly contradicting the U.S. Constitution’s guarantee of freedom of religion.

The winner of the GOP nomination will face Lt. Governor John Fetterman (D) in the general election for the seat being vacated by retiring Republican Senator Pat Toomey. A doctrinaire leftist who supported Vermont socialist Sen. Bernie Sanders’s presidential runs, Fetterman has managed to consolidate significant support from liberals and leftists in Pennsylvania and nationally. He defeated U.S. Representative Conor Lamb (D-PA-17) 59.1 percent to 26.3 percent for his party’s nomination.

While this week has been a triumphant one for Pennsylvania’s second-in-command, it hasn’t exactly been easy. The former Braddock mayor suffered a heart clot that led to a stroke the weekend before the election. Fetterman checked into Penn Medicine Lancaster General Hospital, where doctors removed the clot. The lieutenant governor is reportedly on course for a full recovery.