Pence to Rally with Kemp on Eve of Primary 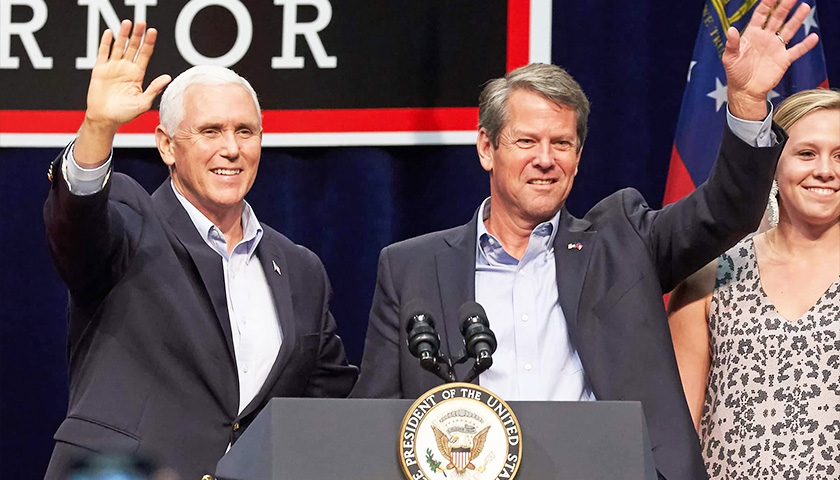 In an act of opposition against former President Donald Trump, former Vice President Mike Pence will rally with Gov. Brian Kemp (R) on the eve of Georgia’s primary election day.

The Vice President's leadership was instrumental in creating the most prosperous economy in American history, including here in Georgia, and his commitment to building a safer, stronger America represents the highest ideals of our party.

“The Vice President’s leadership was instrumental in creating the most prosperous economy in American history, including here in Georgia, and his commitment to building a safer, stronger America represents the highest ideals of our party,” Kemp said.

Pence had kind words for Kemp.

“Brian Kemp is one of the most successful conservative governors in America,” said Pence. “He built a safer and stronger Georgia by cutting taxes, empowering parents and investing in teachers, funding law enforcement, and standing strong for the right to life. Brian Kemp is my friend, a man dedicated to faith, family and the people of Georgia. I am proud to offer my full support for four more years of Brian Kemp as governor of the great state of Georgia!”

Trump, who holds a grudge with Kemp over a perceived lack of action in the wake of the 2020 election, notoriously endorsed Kemp’s opponent, former Senator David Perdue (R-GA), who lost his reelection bid in a runoff in January of 2021.

But Trump has seen pushback from members of the Republican Party for his support of Perdue.

Just this week, he was engaged in a war of words with former New Jersey Governor Chris Christie, who, along with Governor Doug Ducey (R-AZ) and Governor Pete Ricketts (R-NE) have sided with Kemp.

“Today, the worst ‘election integrity’ governor in the country, Brian Kemp, loaded the great state of Georgia up with RINOs. That’s right, he had them all,” Trump said in a Wednesday statement. “Chris Christie, Doug Ducey from Arizona, and Pete Ricketts from Nebraska. That tells you all you need to know about what you are getting in Georgia – just a continuation of bad elections and a real RINO if you vote for Brian Kemp.”

Some view the race as a litmus test for Trump’s grip on the Republican Party, after Trump-endorsed J.D. Vance last week won Ohio’s hotly-contested U.S. Senate primary on the heels of Trump’s endorsement of his campaign.

The primary election is Tuesday.

Pete D’Abrosca is a reporter at The Georgia Star News and The Star News Network. Email tips to [email protected].
Photo “Mike Pence and Brian Kemp” by Brian Kemp.