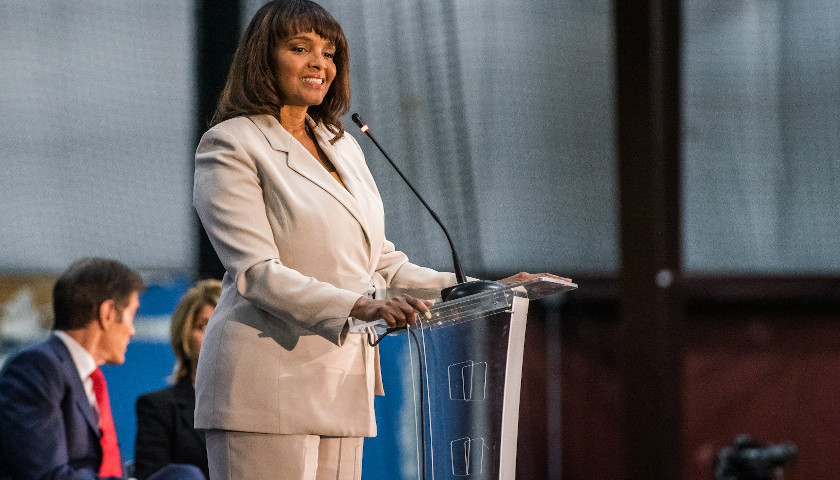 The largest grassroots Catholic organization in the country, Madison, Wisconsin-based CatholicVote announced Tuesday its endorsement of Barnette, a pro-life advocate who has shared her own personal story about having been conceived in rape.

“Catholics don’t have to worry whether Kathy Barnette is sincere, said Brian Burch, president of CatholicVote. “The other candidates in the race are working to cover up or explain away their past positions, but Kathy Barnette doesn’t have that problem.”

At a time when Roe v. Wade could be overturned and the regulation of abortion sent back to the states to be decided by our elected representatives, now more than ever we need strong pro-life leaders who are unafraid to stand up for the truth and the unborn. Kathy, who is also a veteran, will stand up for our country’s values and help counter the radicalism of the anti-Catholic left.

The Catholic advocacy organization plans to contact over 200,000 Pennsylvania Catholic voters via mobile devices to urge them to vote for Barnette.

According to the group’s statistics, over three million Catholics reportedly live in Pennsylvania, with about 537,000 of voting age.

“If Pennsylvania Catholics and other faith voters want to know if they can trust Kathy Barnette on the right to life and other critical issues, all they need to do is look at her life story,” Burch said. “Kathy Barnette’s life itself is a testament to her convictions. We know she will fight hard for life, family, parents’ rights, and our American way of life.”

CatholicVote self-describes as “a national faith-based advocacy organization, organized by faithful Catholic laity in full communion with the teachings of the Church, yet does not claim to speak for any individual bishop or the United States Conference of Catholic Bishops.”

“Kathy is a courageous advocate for life who exposes the human cost of abortion,” said Marjorie Dannenfelser, president of SBA List. “Her deeply compelling personal story ought to stir consciences across our nation, as she is proof that every child has dignity and deserves a chance and every mother deserves our support to choose life.”

The pro-life advocates contrast Barnette’s commitment to the right to life to that of Democrat candidate John Fetterman, who tweeted earlier in May, “Let’s be clear: The right to an abortion is sacred.”

Let's be clear: The right to an abortion is sacred.

Democrats have to act quickly – get rid of the filibuster to pass the Women's Health Protection Act + finally codify Roe into law.

We cannot afford to wait.

On Wednesday the Club for Growth added its endorsement of Barnette and launched a multi-million dollar ad campaign to promote her.

“Kathy Barnette is a principled conservative and a fighter who will take on the socialists in Washington to preserve the American dream for generations to come,” said David McIntosh, president of Club for Growth Action. “We look forward to supporting Barnette in her race to become the next senator from Pennsylvania.”

Barnette has surged ahead and appears poised to challenge the Donald Trump-backed candidate Mehmet Oz’s lead in the Senate race, according to a Fox News poll this week.

“Oz has closed the gap, and the parallels with J.D. Vance in Ohio are obvious,” said Fox News Republican pollster Daron Shaw Tuesday. “But [David] McCormick and Barnette have considerable support, and with one out of five voters uncommitted, odds are that the vote will be very close.”

“Her support doubled in two months, her supporters are the most interested, and her negatives are much lower than Oz or McCormick,” he noted.

Among the subgroup of voters with significant interest in the election, Barnette (25%) holds a narrow lead over both Oz (22%) and McCormick (21%), Fox News observed.

The poll surveyed 1,001 Pennsylvania Republican primary voters and has an overall margin of sampling error of plus or minus three percentage points.

According to the Philadelphia Inquirer, Barnette said about her small-budget race against well-financed Oz and McCormick:

Everyone knows Oz is running for this race. Everyone knows McCormick is running in this race, and they’re holding their nose. When they break, the undecideds, they’re gonna break in my direction. There’s nothing (Oz and McCormick) can possibly say to these people… that they haven’t already said, because they’ve spent such an insane amount of money.

“I think what (supporters) find in me is a sense of authenticity,” Barnette told The Inquirer. “They see me as one of them. And if our leadership is listening, then they would pay attention to that.”