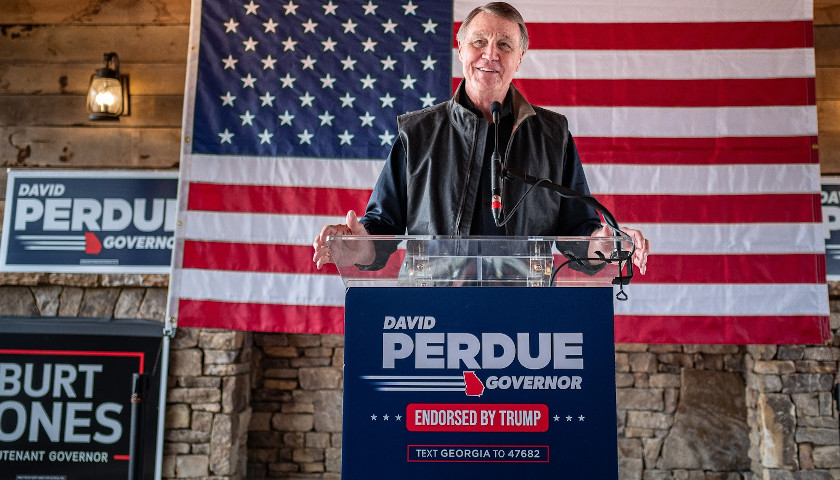 The Trump-endorsed Georgia governor candidate David Perdue issued a statement on Wednesday that said his campaign is surging and Trump voters are turning out in an unprecedented way.

“Our Trump-endorsed campaign is experiencing a surge in early-voting MAGA voters that the public polls aren’t picking up. Our internal models show this MAGA surge keeping Kemp below the threshold to avoid a runoff, and our position is strengthening with each day of early voting,” Perdue said.

The campaign noted that over 146,000 Georgians have cast Republican primary ballots through Tuesday. That’s almost four times the amount that had cast ballots through the same period in 2018.

The campaign further said that 46.5 percent of those who have voted in this election did not vote in the 2018 primary that included incumbent Governor Brian Kemp. Twenty-one thousand of these voters are said to have cast votes in other elections every time former President Donald Trump was on the ballot.

The campaign additionally noted that turnout in pro-Trump regions is high, including in the districts that are currently represented by Trump-endorsed U.S. Representatives Andrew Clyde (R-GA-09), Marjorie Taylor Greene (R-GA-14), and Jody Hice (R-GA-10).

In a separate statement released on Tuesday, Perdue’s campaign again blasted Governor Kemp on the incentives given to the George Soros-owned Rivian company.

“Brian Kemp is spending $1.5 billion of our tax dollars on an experiment that failed before it even got off the ground. Ford Motor Company – one of Rivian’s largest shareholders in addition to George Soros – is now backing out of its investment,” said Perdue.

“This woke California start-up has virtually no sales and no viable business plan. It’s lost over 80 percent of its value in the last six months. Soros’ $2 billion investment is now worth 25 cents on the dollar,” he said. “The alarm bells are ringing, but the governor refuses to listen. This kind of nonsense is exactly what happens when amateurs try to play in the big leagues.

“Shelling out $200,000 per potential job for an unproven, Soros-funded startup is downright reckless, but that’s exactly what Kemp has done. We deserve a governor who has enough common sense to steer clear of asinine deals with George Soros,” concluded the former senator and candidate for governor.

The Republican primary is scheduled for May 24. If no candidate achieves the 50-percent threshold on May 24, then the top two candidates will face off again in a runoff that would occur on June 21.

Aaron Gulbransen is a reporter at The Georgia Star News and The Star News Network. Email tips to [email protected]. Follow Aaron on GETTR, Twitter, and Parler.
Photo “David Perdue” by David Perdue.