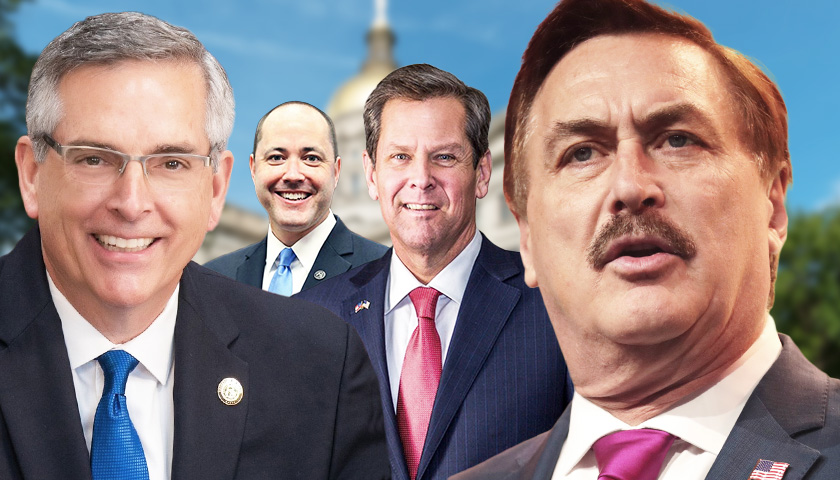 HAMPTON, Georgia – Minnesotan entrepreneur, conservative politico, and MyPillow CEO, Mike Lindell, spoke to The Georgia Star News on Saturday at the Atlanta Motor Speedway, where he criticized the three most infamous election integrity antagonists in the Peach State when he declared, “You guys have the Triple Crown of crime down here with Kemp, Raffensperger and Carr, and all of them need to go.”

Lindell continued, “I mean, this is our country. Of all the stuff I’ve been out there fighting for with the election crimes, and then you have Republicans. The Republicans have turned [their back] on, not just Georgia, but on our country. I mean, you’ve got to get new people and we got to get people that have the people’s back.”

Lindell traveled to Georgia to support the Real Georgia Speaks Team Trump bus tour and to appear at a remote broadcast of the John Fredericks show, Outside the Beltway, held at the OK Cafe in Atlanta.

The midwestern CEO elaborated, “I was never involved in politics. I can count on two hands politicians like our great president, Donald Trump, and a few others that have the people’s back and not have a self-serving agenda, which these three guys [Carr, Raffensperger, and Kemp] do.

Lindell described the 2020 election as one that “will go down as the most significant election in history.”

He added, “There is nothing in between this time around; they’ve got to stand up and we have to have the best, fairest elections in history. And we’re a long way from that.”