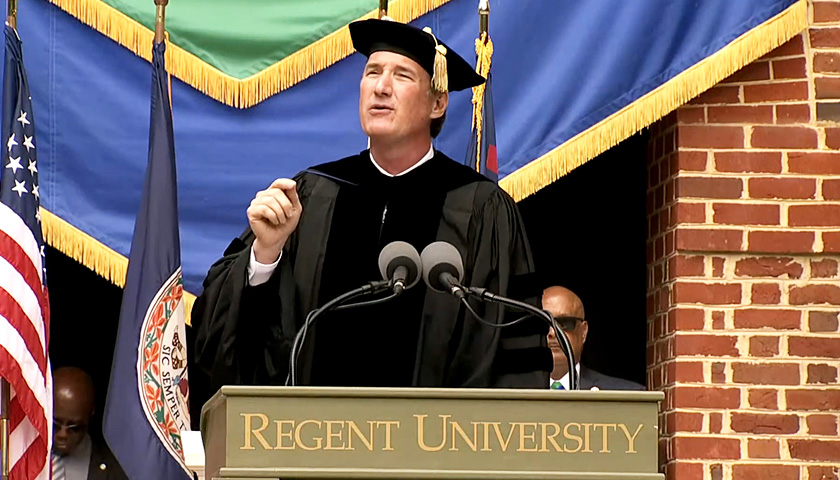 In a commencement speech at Regent University, Governor Glenn Youngkin told graduates to follow two guides: mentors and a “compass that points us in the direction of core values that define us.” He told them that they were not called to comfort, and criticized conformity in academia.

“Sometimes we are called to speak up, to say unpopular things, to invite ridicule and scorn. If I could offer one critique of higher education today, and I mean this in the most global sense, it’s that there’s too much group-think, too much conformity to modern doctrine, too much intolerance that rears itself in the form of a canceled culture,” Youngkin said.

Before the speech, televangelist and Regent University Founder Dr. Pat Robertson introduced Youngkin: “He occupies the same office that was held by Patrick Henry and Thomas Jefferson, and I don’t want to embarrass our speaker, but I think he’s going to exceed both of them in his term. I’m putting the burden on you, Glenn, I want you to know.”

In his speech, Youngkin said that graduates had the opportunity to “reintroduce the concept of grace” in public conversation allowing debate even on issues with deep disagreement.

“Current culture reinforces self-obsession. It focuses on identity and then judgment. But for the practicing Christian, the identity that matters most is our identity with Christ: one body, regardless of race, regardless of ethnicity. And in Christ, there are no hyphens. There are no pronouns. It’s all about Him.”

At the end of his speech, Youngkin said, “For the graduates of Regent University, this day comes not only with the recognition of achievement, but with a responsibility: the responsibility of being an ambassador for this university – no, not ambassador, but disciples, disciples of this great university and its teaching.”

In her speech, Lieutenant Governor Winsome Earle-Sears said Robertson’s and the university’s successes are the results of obedience.

She told the graduates, “You’ve got to know what this is about. You were created to glorify Him [God].”

After praying over them an excerpt from Jesus’ prayer in John 17, Earle-Sears said, “[Jesus] didn’t pray that you would be taken out of the world. He says, ‘No, no, no.’ In the Southern parlance, y’all are staying, and you have to know how to deal with it. And so, I say to you: Remember, don’t lose yourself. Don’t lose your family, because all of these trappings are going to be gone one day.”

Eric Burk is a reporter at The Virginia Star and The Star News Network.  Email tips to [email protected].
Photo “Glenn Youngkin” by Regent University.