Biden Tells Alito He Can Ignore Stare Decisis, Overturn Roe in 2006 Exchange – If He Has the Votes 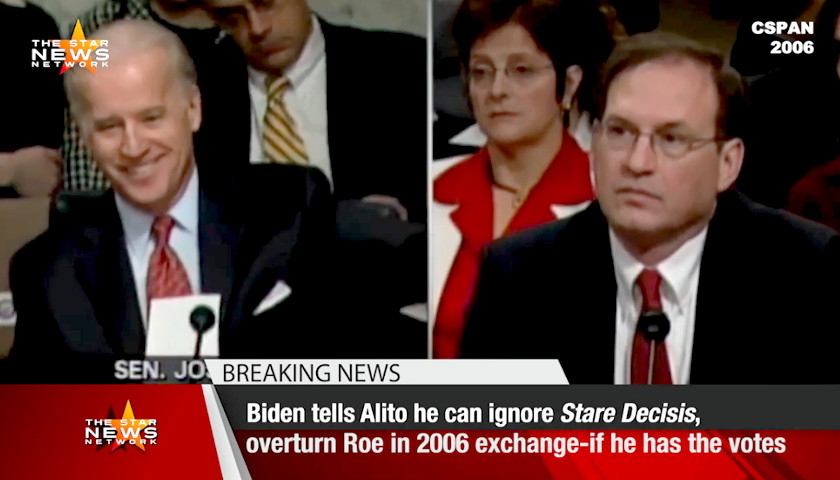 Neil W. McCabe, the national political editor of The Star News Network, reports on how during the 2006 confirmation hearings for then-Judge Samuel Alito, then-Sen. Joseph R. Biden Jr., suggested to Alito that he would be in his rights to engineer the overturn of the 1973 Roe v. Wade decision, regardless of concerns for precedence – if he had the votes.

Critical to those hearings then was Stare Decisis, a legal principle that binds present courts to previous court rulings. The issue in Dobbs is that supporting the Mississippi law would mean reversing the high court’s 1973 Roe v. Wade decision, which established a constitutional abortion right Jackson women’s health advocate Julie Rickelman told the justices stare decisis was the most important reason to overturn the Mississippi law.

Rickelman said, ‘First, stare decisis presents an especially high bar here in Casey, this court carefully examined and rejected every possible reason for overruling Roe, holding that a woman’s right to end a pregnancy before viability was a rule of law and a component of liberty it could not renounce.’

McCabe: Despite President Biden’s criticism of Alito’s draft overturning Roe in 2006, Senator Biden pushed Alito to follow the lead of Justice Antonin Scalia in his Casey dissent and throw out Roe altogether.

Biden said, ‘Scalia said in the abortion, he said, look, we should just look at this head on Roe v. Wade’s wrongly decided. We should just say so, and he’s entitled to do that. And if he had a majority, I’m not suggesting what you would do on that. He’s entitled to do that, and that wouldn’t be a violation of any written or unwritten code that relates to Supreme Court Justice’s conduct, would it?’

McCabe: In 2006, Alito seemed to agree with Biden and with Dobbs, took Biden’s advice to heart.

Alito said, ‘In the area of constitutional law, there has to be the ability to revisit a case like Plessy versus Ferguson. I don’t think anybody would want a system of stare decisis that made that impossible.