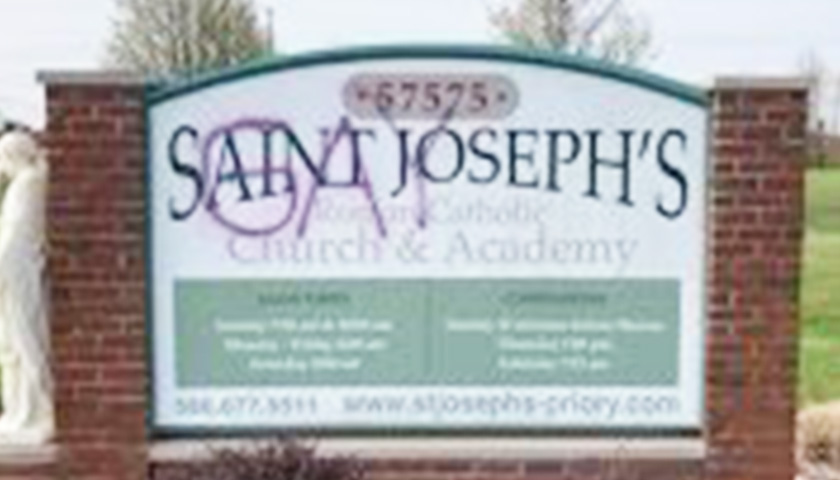 In the wake of a leaked draft opinion from a Supreme Court case that could overturn Roe v. Wade, a Catholic church and school in Michigan has been vandalized with vulgar graffiti.

Activist Dave Reilly shared photos of the destruction of Saint Joseph’s Church and Academy in Armada on his Twitter account Friday.

St. Joseph’s is an SSPX church in Armada, Michigan.

If anyone has any information, please contact the church: https://t.co/D2VaFApAwc pic.twitter.com/BMSXnIfBPm

The images show multiple slurs, including “F*g Republicans Dead,” along with the numbers “666,” and the pentagram, both of satanic significance.

Also, the word “Gay” was spray-painted onto the church and school’s sign.

The church did not return a Friday comment request.

The office of Gov. Gretchen Whitmer did not immediately return a comment request.

The vandalism of St. Joseph’s Catholic Church follows a pattern of Catholic churches across North America being vandalized, including two that were burned to the ground in a span of days in Canada last summer.

A Catholic Church in Boulder, Colorado was also vandalized this week after the leaked Supreme Court draft opinion. It was defaced with pro-abortion graffiti, including the slogan “My Body, My Choice.”

In February, three Catholic cemeteries in Pennsylvania were spray painted with graffiti.

In the same month, another cemetery in Massachusetts was vandalized. It had previously been vandalized last October.

Firefighters responded to the attempted arson of an Ohio Catholic church in February, which caused $1 million in damage to the church.

Other incidents occurred in Georgia and New Mexico, also in February, according to the National Catholic Register.

“On Feb. 17 in Milledgeville, Georgia, a vandalism attack at Sacred Heart Catholic Church knocked over two statues of angels and damaged them,” that outfit said. “Father Young Nguyen, the church pastor, heard noises from the vandalism but when he went outside he did not see anyone but discovered the damage.”

“In Albuquerque, New Mexico, four stained-glass windows at the Shrine of the Little Flower, also known as St. Therese of the Infant of Jesus Parish, were broken around 2am on Feb. 14,” according to the publication. “Trash was strewn around the building and there was some damage to the church’s clay roof tiles.”

Pete D’Abrosca is a reporter at The Michigan Star and The Star News Network. Email tips to [email protected].
Photo “Saint Joseph’s Church and Academy” by Governor Reilly.