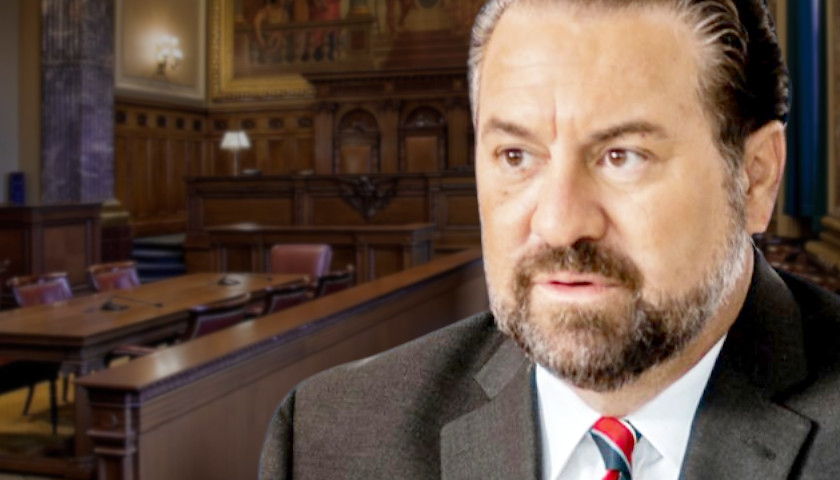 The attorneys general of Texas, Missouri, and Montana are withdrawing from the National Association of Attorneys General (NAAG) over its “leftward shift over the last decade,” and unconfirmed rumors are circulating that Arizona Attorney General Mark Brnovich will be the next to exit. Since NAAG’s activities fall along partisan Democrat lines, and Brnovich has sued the Biden administration numerous times over its policies, he may find there are too many conflicts to remain a member.

Brnovich told The Arizona Sun Times he had no comment at this time but would be looking into it next week.

Texas Attorney General Ken Paxton, Missouri Attorney General Eric Schmitt, and Montana Attorney General Austin Knudsen said in a joint statement on May 4, NAAG’s “liberal bent has fundamentally undermined NAAG’s role as a ‘nonpartisan national forum’ that ‘provides a community … to collaboratively address’ important issues. We can no longer spend our taxpayers’ money to sustain our membership with NAAG under these circumstances.”

The three said they informed NAAG’s senior leadership of their concerns but nothing was done. They cited the departure of Alabama Attorney General Steve Marshall last year. He stated at the time, “I can’t justify spending taxpayer dollars to fund an organization that seems to be going further and further left. With the money we will save, I can add a young lawyer to my consumer protection division and yield a far better return on the taxpayers’ investment.”

Marshall pulled out after Alabama got only $9 million from a huge $573 opioid settlement, even though Alabama leads in opioid prescriptions. NAAG got $15 million from the settlement, and it was turned over immediately, whereas the states had to wait for annual installments.

Fund Committees, which are dominated by Democrats, control the disbursement of settlement money. Knudsen said he asked how the committees were spending the funds but was stonewalled with lies. Republicans object to state AGs taking significant money from outside the legislative appropriations process to fund blue-state litigation activity.

Republicans contend the Democrats who control NAAG favor trial lawyers, outsourcing consumer protection work to their trial lawyer buddies (the National Trial Lawyers is the largest contributor to the Democratic Party). They accuse NAAG of controlling litigation funds that bankroll left-wing consumer protection training and lawsuits instead of going to victims. According to The Washington Free Beacon, Republican critics say the organization “has become a legal ‘deep state’ that allows liberal career staff in red-state AG offices to coordinate multi-state actions with limited interference from their Republican bosses.”

Their announcement came after NAAG’s annual conference disappointed Republicans last month after a feeble attempt was made to show it wasn’t just another left-wing organization. The new Republican executive director, Nebraska Attorney General Doug Peterson, was featured as a speaker, but he’s expected not to stick around long; NAAG has already lined up a Democrat to replace him, Vermont Attorney General T.J. Donavan. A keynote speaker was James Steyer, the brother of left-wing financier Tom Steyer.

Its leadership is almost all Democrats; there are 10 Democrats and one Republican who is considered fairly moderate. Outgoing President Tom Miller, the attorney general of Iowa, boasts on his website about defending the Affordable Care Act. Incoming President Josh Stein, the attorney general of North Carolina, previously served in the North Carolina Legislature, where his colleagues ranked him the most effective Democratic Senator.

Each year, the president of NAAG chooses a presidential initiative to promote. In 2021, it was “The People v. Hate,” “which focused on uniting state and territory attorneys general to counter hate and hate-related violence nationwide.” Strategic partners include the American Bar Association, which is described by legal scholar Carrie Severino as a “left-wing advocacy group.

A Zoom panel discussion on social media disinformation talked about reforming amplification algorithms in social media to isolate the [allegedly] far right. Kyle Rittenhouse’s self-defense actions in Kenosha were denounced as “definitely outside the law,” despite the fact a jury found him innocent, and Republican Spanish-language ads comparing the Biden-Harris ticket with socialist regimes were singled out as disinformation.

One of the most recent actions taken by NAAG was calling on Congress to support funding of the Legal Services Corporation, which provides funding for low-income Americans, but with a heavy bias toward left-wing causes.

Rachel Alexander is a reporter at The Arizona Sun Times and The Star News Network. Follow Rachel on Twitter. Email tips to [email protected].
Photo “Mark Brnovich” by Mark Brnovich.