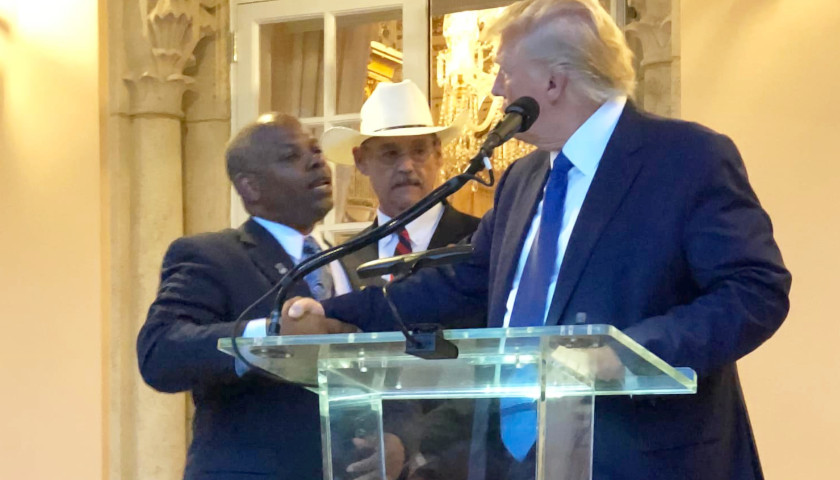 “So Jarome, what are you running for? What and where?” Trump asked, according to a video of the event, where attendees vied to draw Trump’s attention to their candidacies across the U.S.

“A RINO, Jen Kiggans, is running against me,” Bell said. “They call me the black Trump of Virginia.”

VA-04 GOP candidate Leon Benjamin Sr. was also present, shouting from the crowd, “I’m running for Congress in the fourth in Virginia, and we’re going to wipe it up.”

“He has pledged to join the House Freedom Caucus, and will be another courageous warrior fighting in Washington for our true conservative principles and to defeat the radical left,” Good said.

Both the endorsement and Bell’s appearance with Trump have attracted Democratic media coverage.

State Senator Jen Kiggans (R-Virginia Beach) is the front runner in the VA-02 congressional nomination. According to the Virginia Public Access Project, she’s raised $1.1 million so far in the race, while Bell has raised $424,098.

Both Kiggans and Bell are Navy veterans.

The nominee will face Representative Elaine Luria (D-VA-02) in a race that’s considered a likely win for the GOP.

On Wednesday, Kiggans announced her first ad of the race.

“As Navy pilot, I was proud to serve our country. As a nurse practitioner, I serve my patients. And as a conservative state senator, I fight for our families,” Kiggans said in the TV ad highlighting the economy, borders and national security.

Eric Burk is a reporter at The Virginia Star and The Star News Network.  Email tips to [email protected].
Photo “Jarome Bell and Donald Trump” by Jarome Bell.