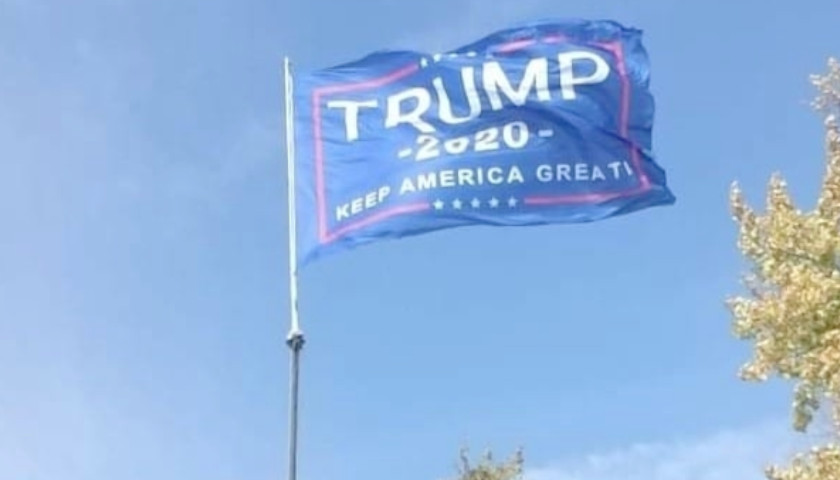 The Minnesota Court of Appeals has ruled that a Buffalo construction company owner is not violating city ordinances by flying a large Trump flag from a crane.

The Monday ruling reverses the city of Buffalo’s determination that Jay Johnson’s 30-by-50 foot flag reading “TRUMP 2020 Keep America Great” violated its ordinances on size restrictions and the attaching of signs to equipment.

According to the ruling, the size restriction ordinance does not apply to “non-commercial” signs, while restrictions on attaching signs to equipment effectively deny Johnson’s free speech rights.

“We reverse because (1) a provision of the ordinance prohibiting advertising or
business signs attached to equipment does not apply to relator’s sign, and (2) the other
provisions of the ordinance applied to relator’s sign create content-based restrictions on
speech that do not survive strict scrutiny,” wrote Judge Sarah Wheelock in the opinion section of the ruling.

Further, the ruling specified that the Buffalo City Council, which had fined Johnson for apparently running afoul of their ordinances, failed to prove how non-commercial signs and so-called “holiday” signs should be treated differently in “preserving [the city’s] aesthetic appeal and traffic safety.”

“The city has thus failed to meet its burden to prove that the non-commercial-sign provision’s size restrictions on non-commercial signs, but not holiday signs, are narrowly tailored to further a compelling government interest,” the court concluded. “The size restrictions of the sign ordinance fail strict-scrutiny review, and therefore the administrative penalties imposed by the city are based on an erroneous theory of law and must be reversed.”

The flag has flown on property owned by Johnsonville LLC since 2020, though it was taken down only briefly after the presidential election. Shortly after Johnson began flying the flag again, the windows of several company-owned vehicles were allegedly shot out.

As reported by The Star Tribune, Johnson’s attorney Aaron Dean released a statement Monday expressing gratitude for the ruling.

“We are very thankful for the ruling by the Court of Appeals,” Dean said. “We believe one of the bedrock foundations in this country is you can’t publicly punish someone for their political speech.”

“We are hopeful that the appellate ruling will allow the mayor and the City Council to reconsider the harassment of Jay Johnson, his family and his company,” he added.

Evan Stambaugh is a freelance writer who had previously been a sports blogger. He has a BA in theology and an MA in philosophy.
Photo “Trump Flag” by Save the Flag at Johnsonville.