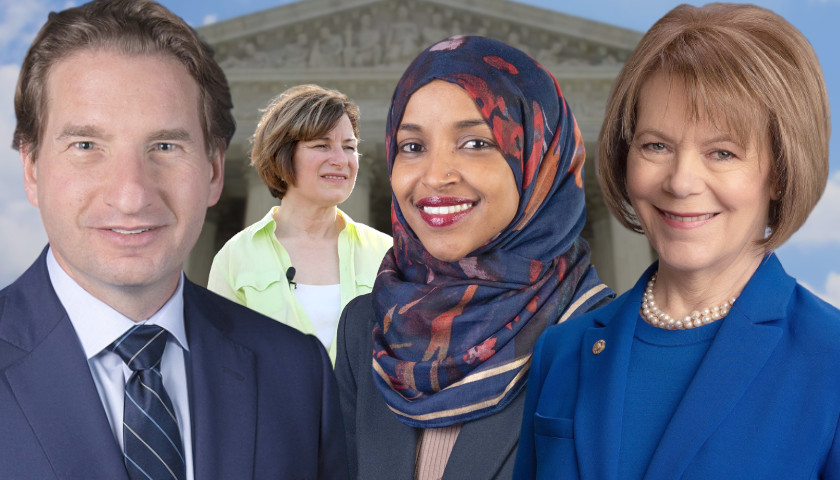 Rep. Ilhan Omar and her communications director both made radical calls to upend the Supreme Court after a leaked decision indicated that the court plans to overturn Roe v. Wade.

The leak, obtained by Politico, is the initial draft of the majority opinion of the court which holds “that Roe and Casey must be overruled.” This decision would end federal protection of abortion, although states like Minnesota, which have legally guaranteed it locally, can continue the practice.

“They will not stop here,” the left-wing representative predicted.

Omar’s deputy communications director, Isi Baehr-Breen, issued a similar statement with a harsher bent. “Fucking good riddance to the trust and conviviality between the justices. Comity with people who want to destroy your life and the lives of millions of people is evil. Fuck it,” he said.

Sen. Tina Smith, a former Planned Parenthood executive, also has thoughts about the state of the court. She promoted a baseless conspiracy theory that “President Trump stole two Supreme Court seats,” enabling the impending Roe decision. She didn’t specify which of the three justices who were appointed under Trump’s presidency sit in stolen seats. She also did not provide any evidence that the justices, who were all confirmed by a democratically elected Congress, “stole” their seats.

Smith has previously said Democrats need to pack the court “to protect our democracy.”

Meanwhile, other Minnesota Democrats have properly identified that the state is likely to become a sanctuary for abortion. This is because of a Minnesota Supreme Court case called “Doe v. Gomez” that has a similar effect as Roe at the local level.

Democratic State Auditor Julie Blaha said the Roe decision emphasizes the importance of “local control and the freedom to make local decisions,” echoing ideas of federalism and small government that are usually promoted by Republicans.

Minnesota DFL Chair Ken Martin took a much darker tone, describing the current moment as a “grim new chapter of American history.” He also implied that abortion will now become a legislative fight as lawmakers try to codify abortion access into law.

It is a fundamental right for a woman to make her own health decisions. We must protect the right to choose and codify Roe v Wade into law.

The impending destruction of women’s rights protected by Roe v. Wade is a direct result of recent changes to Senate rules. It’s time to modify those rules again, abolish the filibuster, and allow majorities to effect fundamental representation. Do you agree?

Conservatives, on the other hand, welcomed the news of Roe’s impending destruction.

“We rejoice at reports indicating that the Supreme Court may soon overturn Roe v. Wade. While this is not the final opinion of the court, it is a strong indication that after almost fifty years, this cancerous ruling may soon be excised and our nation may begin to heal,” said John Helmberger, CEO of the Minnesota Family Council.

Kyle Hooten is Managing Editor of Alpha News. His coverage of Minneapolis has been featured on television shows like Tucker Carlson Tonight and in print media outlets like the Wall Street Journal.
Photo “Amy Klobuchar” by Gage Skidmore. CC BY-SA 2.0.