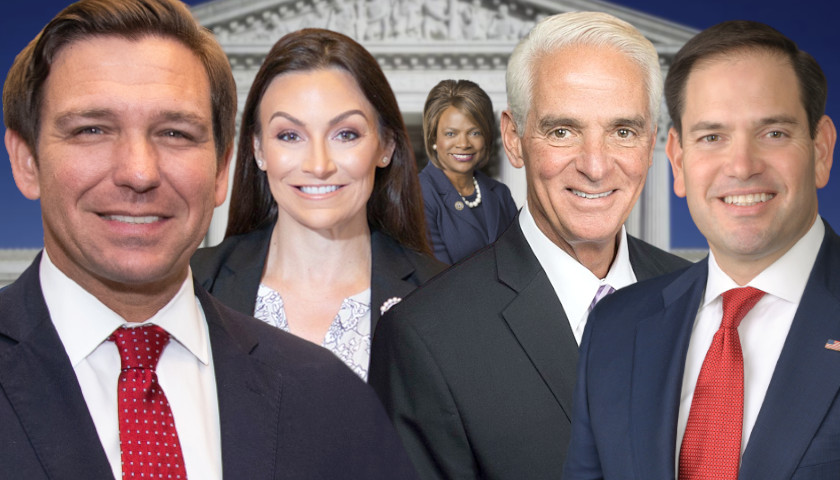 In the wake of the national news that an initial draft of a United States Supreme Court decision had been leaked to the public indicating the high court’s intentions to overturn the landmark Roe v. Wade case, Florida officials have both been chanting and jeering the news. Florida’s anti-abortion politicians have said this could be a good indicator, while pro-abortionists are worried this will lead to more restrictive abortion laws.

Florida Governor Ron DeSantis (R), who last month signed a 15-week abortion ban into law, said the “unprecedented” leak from the nation’s high court could be a “political attack” attempting to cause the SCOTUS justices to change their decision.

“They need to figure out who did that and they need to hold them accountable because that’s a real significant breach of trust,” DeSantis said. “You want to talk about an insurrection, that’s a judicial insurrection, to be taking that out and trying to kneecap a potential majority through kind of extra-constitutional means.”

Florida’s abortion laws are some of the most stringent in the nation, and pro-life groups are encouraging DeSantis to not let up on the gas and push for a complete abortion ban in an upcoming special session if Roe is struck and abortion laws are returned to the states.

Florida Voice for the Unborn, is a pro-life advocacy group calling on DeSantis to act further.

“But now that the legal landscape is about to rapidly change, you have an obligation to follow the lead of other “Red” states like Oklahoma by ending the abortion crisis in our state. With nearly 80,000 abortions reported in 2021 here in Florida, I am pleading with you to act swiftly to save the lives of Florida’s unborn children by immediately amending your April 26th proclamation to include consideration of legislation that would provide a near-total ban on abortions on day one after the final Dobbs decision is released.”

One of DeSantis’ likely gubernatorial opponents, Congressman Charlie Crist (D-FL-13), said the contents of the leak led to “a gut-wrenching day for women and reproductive freedom in our country.”

“This is an inflection point in our democracy and our country,” Fried said at a rally Tuesday. “You need a governor who is going to protect your rights.”

Keith Edwards, communications director for Fried, pointed out on Twitter that Crist’s history as a pro-choice advocate has only been recent. Edwards included images of newspaper stories from when Crist was Florida’s attorney general, indicating that he would have signed an abortion ban if governor.

“Charlie Crist spent 30+ years of his adult life fighting FOR Republican policies, not fighting against them,” Edwards said. “This tragic moment is happening because of the Charlie Crists of our country. They’re not going to be the ones to save us from it.”

Charlie Crist spent 30+ years of his adult life fighting FOR Republican policies, not fighting against them.

This tragic moment is happening because of the Charlie Crists of our country. They're not going to be the ones to save us from it. pic.twitter.com/amINNwDNbp

In Florida’s Senate race between incumbent Senator Marco Rubio (R) and his likely opponent, Congresswoman Val Demings (D-FL-10), Rubio offered his support for the possibility of abortion law being brought back to the states, but Demings said a decision like overturning Roe would turn women into “second-class citizens.”

“Striking down Roe v. Wade and taking away a woman’s right to make her own decisions is appalling and dangerous,” Demings said. “We refuse to go back to being treated as second-class citizens whose personal decisions are made by politicians like Marco Rubio, who has fought relentlessly against the right of Florida women to control their own destiny. Women deserve an end to the constant politicization of our basic, fundamental rights. Let me be clear: I will always stand up, speak out, and fight to codify Roe v. Wade into law, no matter what.”

Rubio tweeted that Democrats and progressives had to upend SCOTUS tradition and norms in order to intimidate the justices.

“The next time you hear the far left preaching about how they are fighting to preserve our Republic’s institutions & norms remember how they leaked a Supreme Court opinion in an attempt to intimidate the justices on abortion,” Rubio said.

The next time you hear the far left preaching about how they are fighting to preserve our Republic’s institutions & norms remember how they leaked a Supreme Court opinion in an attempt to intimidate the justices on abortion https://t.co/9W6jKCZQQt

Grant Holcomb is a reporter at The Florida Capital Star and The Star News Network. Follow Grant on Twitter and direct message tips.
Photo “Charlie Crist” by Charlie Crist.