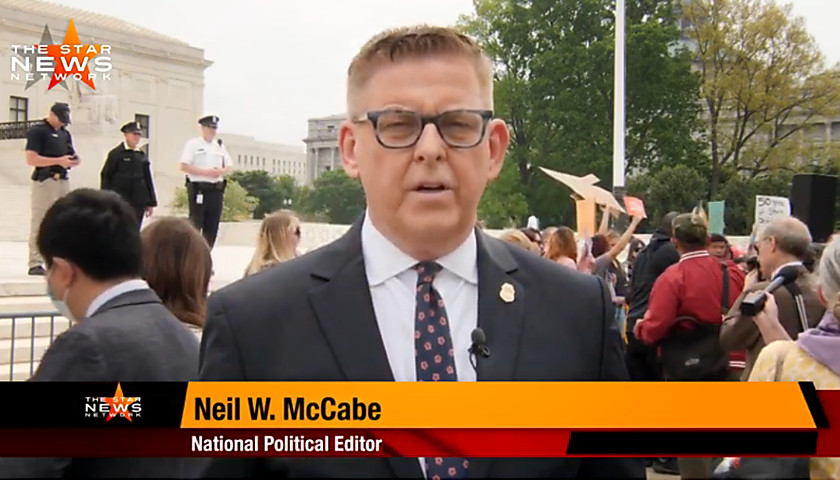 Neil W. McCabe, the national political editor of The Star News Network, covered the May 3, 2022, demonstrations in front of the Supreme Court after the German media outlet “Politico” posted a leaked draft of Associate Justice Samuel Alito’s opinion for the majority in the Dobbs v. Jackson Women’s Health case–in which Alito called for the complete overturning of the 1973 Roe v. Wade decision.

McCabe: Thousands of protesters and media from all over the country and all over the world are converging upon the Supreme Court. After the German media outlet, Politico leaked a draft of Justice Samuel Alito’s majority opinion overturning the 1973 Roe v. Wade decision.

Washington attorney and member of the Supreme Court Bar George Bronn told The Star News Network why it is significant when a decision draft was leaked.

Braun: The significance of a leaked draft or leaked anything from the Supreme Court is the integrity of the courts is taking a hit like nobody’s ever seen before.

McCabe: The leaked draft was based on a preliminary vote held in February after justices heard arguments in the Dobbs v. Jackson women’s health case. Braun said it made sense that Justice Samuel Alito would write the majority opinion for the side voting to use that case to overturn Roe v. Wade.

In his 2006 confirmation hearings, Alito told senators he held that stare decisis, or the principle that courts are bound by previous court rulings was vital but not absolute.

Alito: In the area of constitutional law, there has to be the ability to revisit a case like Plessy v. Ferguson. I don’t think anybody would want a system of stare decisis that made that impossible.

McCabe: After Politico posted the leaked draft, supporters of restoring legal protections for the unborn and their opponents came to the Supreme Court’s steps. At times it got violent, such as this incident.

McCabe: Warren was not the only one angry. Throughout the day, speakers and the crowd expressed their anger at President Joe Biden, who they said abandoned them.