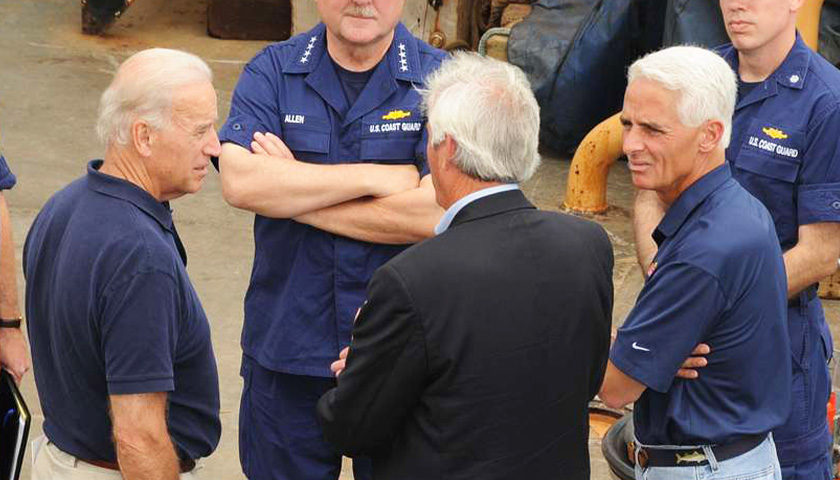 In a question-and-answer article with the Tallahassee Democrat, Florida Congressman Charlie Crist (D-FL-13) said President Joe Biden (D) will go down as “one of the best [presidents] we’ve ever had.” His comments come as he has become the Democrat frontrunner for the 2022 Florida Democrat gubernatorial primary.

Crist was asked if Biden’s presidency is a liability for Democrats since Republicans have referred to the current administration as one disaster after another. Crist said he has been “encouraged by the Biden administration.”

“I’m very encouraged by the Biden administration. I thank God he got elected. I shudder to think what where we would be right now if he hadn’t been.”

“I think this presidency will end up going down in history as one of the best we’ve ever had. If for nothing else, the contrast from the prior administration. That he brought back decency to governing, that he doesn’t tweet in the middle of the night (and) make fun of disabled people.”

“I think that what he’s trying to do is going to break through. Just look at infrastructure alone. I mean, my God, we haven’t made that kind of progress on an infrastructure bill since Eisenhower. And I’m sure it far exceeded anything that Eisenhower was able to spend. He’s done extraordinary things.”

Despite Crist’s optimism, polls suggest the Biden administration’s policies have taken a toll on how Americans view Democrat politics. A Quinnipiac poll recently showed that only approximately 33 percent of Americans approve of the way Biden has been handling his responsibilities.

One of Crist’s congressional colleagues, Senator Elizabeth Warren (D-MA) predicted that Democrats are going to lose mightily in the 2022 midterms if they “don’t get up and deliver.”

Floridians have indicated they do not approve of Democrat policies and are supportive of policies backed by Florida Gov. Ron DeSantis (R). A recent poll showed DeSantis with a double-digit lead over each of the possible Democrat gubernatorial nominees. DeSantis is also one of the top favorites Republican candidates for president among likely GOP voters in Texas.

Most notably, Floridians have also expressed support for the controversial Parental Rights in Education bill despite Crist’s public opposition to it.