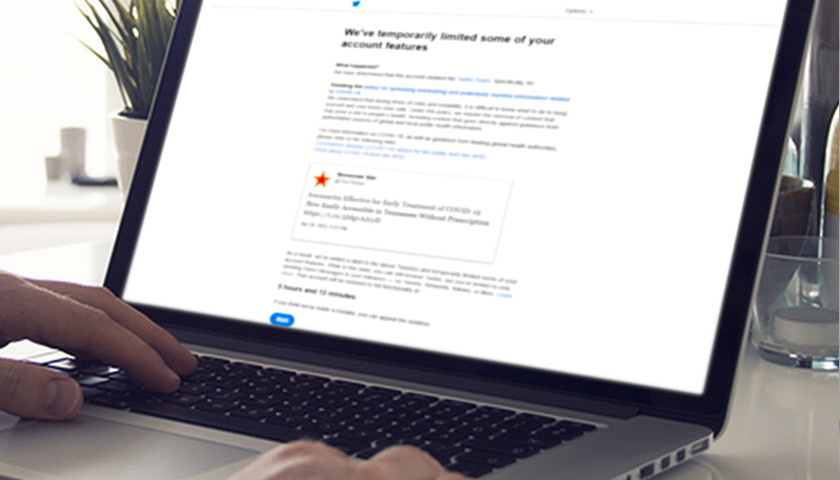 The social media giant said that The Star’s reporting might pose a risk to public health, and in response, The Star will not be able to post any content for several hours.

“As a result, we’ve added a label to the above Tweet(s) and temporarily limited some of your account features,” the microblogging site said. “While in this state, you can still browse Twitter, but you’re limited to only sending Direct Messages to your followers — no Tweets, Retweets, follows or likes.”

But after The Tennessee Star appealed Twitter’s initial decision, another automated message from the company said that The Star’s account could be locked for a week or more.

It remains unclear just how long The Star will be limited in using the application.

At issue is an article noting that Lee signed SB 2188 into law after it was approved by a vast majority of both the Tennessee House and Senate.

“Lee signed SB 2188, approved by the State Senate, 66-20, and the State House, 22-6, which authorizes a pharmacist to provide ivermectin to patients 18 years of age or older, ‘pursuant to a valid collaborative pharmacy practice agreement containing a non-patient-specific prescriptive order and standardized procedures developed and executed by one or more authorized prescribers,'” The Star reported.

Last week, Twitter’s board approved a bid by Tesla CEO and majority owner Elon Musk to purchase the social media site for $44 billion. The deal may take up to six months before it finally closes. Musk promised free speech to all Twitter users under his ownership.

“By ‘free speech’, I simply mean that which matches the law. I am against censorship that goes far beyond the law,” the world’s richest man tweeted after purchasing the company. “If people want less free speech, they will ask government to pass laws to that effect. Therefore, going beyond the law is contrary to the will of the people.”

By “free speech”, I simply mean that which matches the law.

I am against censorship that goes far beyond the law.

If people want less free speech, they will ask government to pass laws to that effect.

Therefore, going beyond the law is contrary to the will of the people.

It is unclear the extent to which Musk is involved in the company’s operations at this time.

Musk is taking the company private, but as of Friday it was still trading publicly, suggesting that he is not yet completely in charge.

On Friday Reuters reported Twitter’s employees were revolting against the new owner, and demanding answers from current CEO Parag Agrawal about what will happen next:

Chief Executive Parag Agrawal sought to quell employee anger on Friday during a company-wide meeting where employees demanded answers to how managers planned to handle an anticipated mass exodus prompted by Elon Musk.

At the internal town hall meeting, which was heard by Reuters, executives said the company would monitor staff attrition daily, but it was too soon to tell how the buyout deal with Musk would affect staff retention.

“It would appear that news of Elon Musk’s pending acquisition of Twitter — and his stated support of free speech — has not yet filtered down to those managing the day-to-day operations of the company,” CEO and Editor-in-Chief of The Tennessee Star and The Star News Network Michael Patrick Leahy said in a statement.