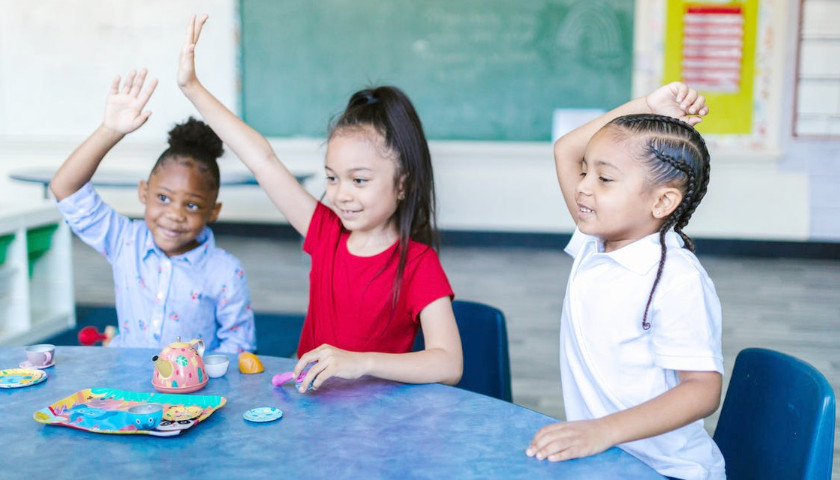 The Evanston-Skokie School District 65 will teach children as young as four years of age to celebrate the transgender flag, to try on different pronouns, and that the “gender binary” created by white “colonizers,” based on male and female sex, must be broken.

The lesson plan opens with an introduction to the rainbow flag and teaches students that “Each color in the flag has a meaning.” The teacher also presents the transgender flag and the basic concepts of gender identity, explaining that “we call people with more than one gender or no gender, non-binary or queer.” Finally, the lesson plan has the teacher leading a class project to create a rainbow flag, with instructions to “gather students on the rug,” “ask them to show you their flags,” and “proudly hang the class flag where they can all see it.”

In pre-kindergarten, the children are taught an "introduction" to the rainbow and transgender flags. Teachers then provide the basic concepts of gender identity, explaining that "we call people with more than one gender or no gender, non-binary or queer." pic.twitter.com/0SFbuATwwC

In kindergarten, children learn about how to express their “gender identity,” and whether they “feel” like a boy or girl or both.

These 5-year-olds are also taught about various “families.”

Some friends might have two parents that are a boy, girl, or both! We call people with more than one gender or no gender, non-binary or queer. Parents who are TRANSGENDER and/or NON-BINARY are still parents who have families they love very much!

In kindergarten, the teachers explain: "When we show whether we feel like a boy or a girl or some of each, we are expressing our gender identity … There are also children who feel like a girl and a boy; or like neither a boy or a girl. We can call these children transgender." pic.twitter.com/4quGQWVu2R

The kindergartners read books that affirm transgender conversions, look at photographs of boys in dresses, and perform a rainbow dance. At the end of the lesson, the students are encouraged to share their own gender identities with the class. "Your identity is for you to decide!" pic.twitter.com/9S3cI3ZPIT

Children in first grade in the Illinois district are encouraged to try out different pronouns such as “ze,” “zir,” “tree,” “they,” in addition to “she” and “he.”

The teacher instructs 5-6-year-old children that gender identity is fluid.

“Whatever pronouns you pick today, you can always change!” the teacher says.

The teacher tells students that “many people feel like they aren’t really a boy or a girl” and that they should “call people by the gender they have in their heart.” Students are encouraged to “break the binary,” reject the system of “whiteness,” and study photographs of black men in dresses and a man wearing lipstick and long earrings.

Teachers continue with the claim that gender is nonbinary.

“Even though we are all given a sex assigned at birth, you are NOT given your gender,” the teacher reinforces. “Only you can know your gender and how you feel inside.”

“The curriculum in Evanston–Skokie School District 65 is the perfect illustration of college-level queer theory translated into early-elementary pedagogy,” Rufo concluded.

Just as school districts insisted they do not teach Critical Race Theory in K-12 schools, so, too, have LGBTQ activists been claiming public schools do not teach the type of material now prohibited in Florida by the Parental Rights in Education Act, he pointed out.

“This claim is demonstrably false, and the Evanston–Skokie lesson plans offer additional proof for parents and legislators concerned about gender ideology in American public schools,” Rufo wrote. “Queer theory has made its way into public school curriculums for children as young as four. This development should be subject to robust political debate, not denial and dismissal from the political Left.”
– – –
Susan Berry, PhD is national education editor at The Star News Network. Email tips to [email protected]