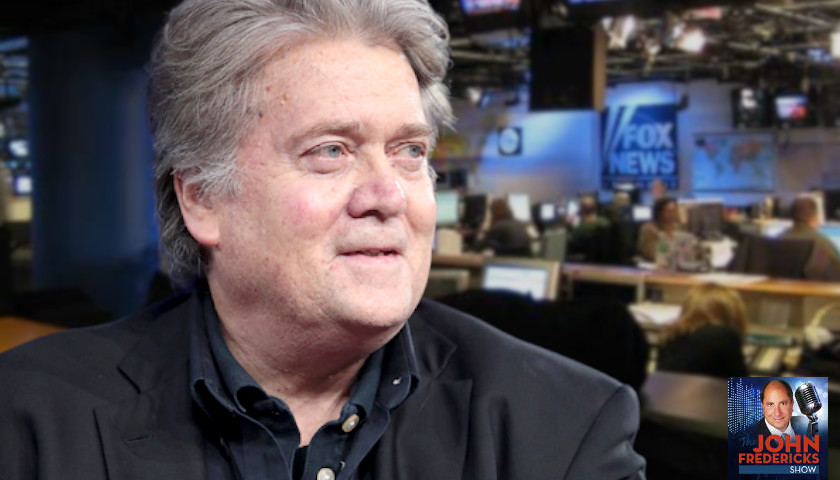 Fredericks: Steve, thanks for being with us. Steve the host of the greatest, biggest live, not podcast, live radio, and television show in America, WarRoom. Ten to noon Monday thru Saturday, John Fredericks Radio Network RAV. And five to six RAV second Edition Battleground, six to seven pm, Monday to Friday, live on Frank Speech. And also the John Fredericks Radio Network in our expanding empire of stations.

So, Steve, I just got to start with this story I was just telling you before you came on. I’m flipping the channels yesterday trying to find the Astros losing again. And I flipped through Fox News and I said, oh, this must be the network for stupid people according to Steve Bannon. That just line is a classic. Steve, thanks for being with us.

Fox News is the controlled opposition. You have Tucker, right? You got a little bit of Jesse Watters and you got Maria Bartiromo every now and again – I love her.

Anybody in this audience from Georgia to Pennsylvania, the Pennsylvania station to Georgia to Virginia, to anybody getting online throughout the world, just understand they detest you and think you are an idiot and spoon-feed you idiocy because they’re controlled opposition. They’re globalists. They couldn’t get more corporatist than the Murdochs.

You just can’t. It’s simple. It’s money and power. Politics is money and power. Unfortunately, I’d love it to be something else. But that’s just the reality. I guess we can’t get away from 10,000 years of recorded history, right?

But people have to understand its controlled opposition and there are voices out there and platforms out there that stands diametrically opposed to that and into basically saving and turning this Republic around. Just go back in time and look at Fox‘s coverage in November leading up to the illegitimate regime’s phony Inauguration Day.

Go back to January 20th and just look at the coverage on the John Frederick Radio Network and WarRoom and a handful of others and look at Fox. Spooging all over Biden with a big hug. The country was over right then.

Remember, the country is over.

Let’s go back in time to when I was running Breitbart, and we stood up to Megyn Kelly back in August of 2015 when the first debate went Fox on orders from the Murdochs – and quite frankly, even Ailes had Megyn Kelly target Trump on the very first question to try to go into his Twitter account, into his Facebook postings or whatever, and as Rush Limbaugh said, do a drive by hit on him. They tried to kneecap him in the very first question.

I’ll give you the PBS clipboard. Megyn Kelly’s crying about how Breitbart went after her with 20 articles a day. That’s correct. They were trying to kill Trump’s campaign right there in the very first debate for Jeb Bush and Marco Rubio and all those worthless neoliberal neocons. They got us in this jam.

Anytime you see Fox talking, all the stuff, all the efforts, all you’re watching at Fox, because I know this audience watches it all the time.

It doesn’t matter because I know the American people and the truth will win out if we continue to fight. Fox rolled over.

They just didn’t roll over, they’re like a lap dog. They were licking up on Biden like a little lap dog. It’s very dangerous. It’s very dangerous because it’s called controlled opposition for a reason. They give you the feeling, the feeling that something’s happening. It’s not happening. You’re losing. Think about it. You lost everything. Everything across every front.

Remember, they’re going to add five new states, 10 new supreme court justices. You all will be domestic terrorists and putting billboards out. And there were a handful of people adamantly opposed to Fox that would sit there and say, no, this thing was stolen.

This is illegitimate. And we’re going to hammer. I’m going to kill it in the crib. They’re trying to send me to prison over that. You think I care? I could give two Fs. I do not care. You know why? We’re on the side of the truth. And the truth will prevail if you’re tough enough and hard enough and relentless enough to push the truth.

You’re going to be the Washington generals to the progressive left. Harlem Globetrotters. That’s what it is. You get a feeling that you win, but you’re not winning. You’re losing. 20 years of Fox got you total and complete defeat. Embrace that and show me where I’m wrong. Tell me where I’m wrong and look at it now.

Biden’s administration he’s got these generals, former military guys on Fox saying they’re beating their chest. Yes, we have their morals because we’re winning. Ask the dead in Ukraine. Let’s ask the dead in Ukraine, the women and children. Let’s ask them if they think they’re winning. Does this look like victory? Does that look like victory? Pure information warfare and it’s ridiculous and it’s dangerous. More importantly, it’s dangerous. But there are enough outlets now and there are enough people that are putting up great content all over the place that you don’t need to watch it.

You don’t need to sit there and just have ridiculous talking points fed to you.

Let me put a case in point. Did they cover Kevin McCarthy’s situation all over the weekend? No. They had a reporter ask McCarthy yesterday. They went out of their way to suppress, really, any details of this McCarthy betrayal of Trump and McCarthy’s betraying every day. He’s still backing anti-Trump candidates, right?

Bannon: Does Kevin McCarthy represent the fight that has to happen?

Bannon: Look at the facts. Don’t listen to Steve Bannon. Look at it with your own eyes and just embrace it. It’s TV for stupid people. They think you’re an idiot and they spoon-feed you idiocy. So if you want to do that, it’s a free country. That’s the great thing about America is the first country. Do what you want.