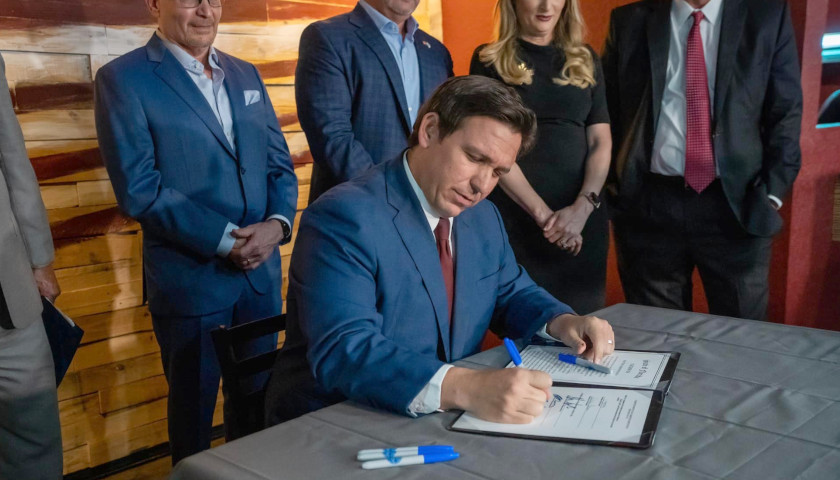 DeSantis signed SB 524, which creates an Office of Election Crimes and Security within the Florida Department of State and will “investigate election law violations and increasing penalties for violations of election laws.”

Additionally, the legislation will increase the penalty for ballot harvesting from a first-degree misdemeanor to a third-degree felony.

“Twenty years ago, nobody thought Florida was a prime example of how to conduct elections, but we have become a national leader by running the most secure elections in the country,” said DeSantis. “We need to do more to ensure our elections remain secure. We have ended ballot harvesting, stopped drop boxes and the mass mailing of ballots, and banned Zuckerbucks, and this bill will give us more resources to make sure bad actors are held accountable.”

The “Zuckerbucks” that DeSantis mentioned is a term that originated from a vote-generating group funded most notably by Facebook’s Mark Zuckerberg. The group specifically targeted counties to dump money into, and they did swing blue during the 2020 presidential election.

Republicans across the country have speculated that the organizations that spent “Zuckerbucks” were entirely driven to elect President Joe Biden.

Previously, there had not been a specific office dedicated to handling election interference and fraud claims, but Florida Secretary of State Laurel Lee endorsed the legislation.

“Governor DeSantis has made elections integrity a top priority from the very beginning of his administration, taking steps to ensure we invested in our elections systems, strengthened our cyber-defenses, modernized equipment, updated voter rolls, and improved transparency, and we’ve seen results,” said Lee. “As Florida’s Chief Elections Official, I share Governor DeSantis’ strong commitment to elections integrity. We want to ensure that every Floridian can have confidence that in Florida, we do elections right.”

Mainstream media outlets have used the phrase “election police force” to describe the new legislation, but the Department of State will be working in connection to the Florida Department of Law Enforcement to ensure criminals are prosecuted.

The mainstream media has also denied the legitimacy of claims of election fraud in the 2020 election, but more details are continuing to emerge regarding the validity of such claims, including in Florida, which has led to numerous individuals charged with voter fraud and voter registration forgeries.

Grant Holcomb is a reporter at The Florida Capital Star and The Star News Network. Follow Grant on Twitter and direct message tips.
Photo “Ron DeSantis” by Ron DeSantis.