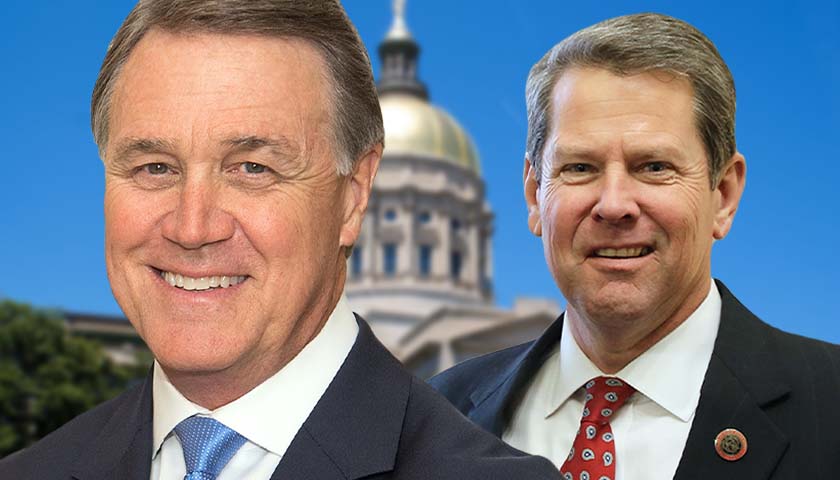 During an exchange, Perdue blamed Kemp for failing to secure Georgia’s elections, leading to his 2021 Senate runoff loss. “The only reason I’m not in the United States Senate is because you caved in and gave the election to liberal Democrats in 2020.”

Perdue also took Kemp to task about tax incentives being given under his watch to Rivian, a company owned by George Soros. “Let’s talk about jobs,” he said. “What you’re doing is taking hundreds of millions of taxpayer dollars in Georgia and giving them to a company owned by George Soros. … You have not today told us how much you’re investing in Rivian. Would you tonight tell us how much of our taxpayer money you’re investing in that?”

In another exchange, Perdue hit Kemp on illegal immigration. “I remember the governor, when he ran in ’18, told us that ‘I’m going to round ’em up, put ’em in my pickup truck and get ’em out of here.’ Governor, what happened? Your pickup break down?”

A key policy proposal of Perdue’s is the elimination of Georgia’s state income tax and he highlighted this during the debate. “Three states right now: Florida, Tennessee, and Texas are eating our lunch. Tennessee and Texas are growing 35 percent faster than Georgia, Governor. … The thing that those three states have in common is they don’t have a state income tax,” he said. “You’ve told the people of Georgia that’s impossible. I want to get rid of the state income tax and help attract jobs here for the right reasons – not buy them with hard-earned taxpayer dollars.”

Jenni Sweat, a spokesperson for the David Perdue for Governor campaign, said of Perdue’s performance, “David Perdue clearly demonstrated that Brian Kemp is a weak governor who divided our party and cannot win in November. A clear difference in this election emerged: Brian Kemp believes Joe Biden won the election fair and square.”

“David Perdue is a bold leader who will make waves and knock heads if that’s what it takes to get things done, and tonight he held Governor Kemp accountable for his numerous failures,” Sweat continued. “As governor, Perdue will secure our elections, eliminate the state income tax, crush crime, and stop the indoctrination of our kids. With President Trump’s endorsement and an army of grassroots supporters, Perdue will win this primary and defeat Abrams in the fall.”

The debate was broadcast on Georgia’s WSB-TV.