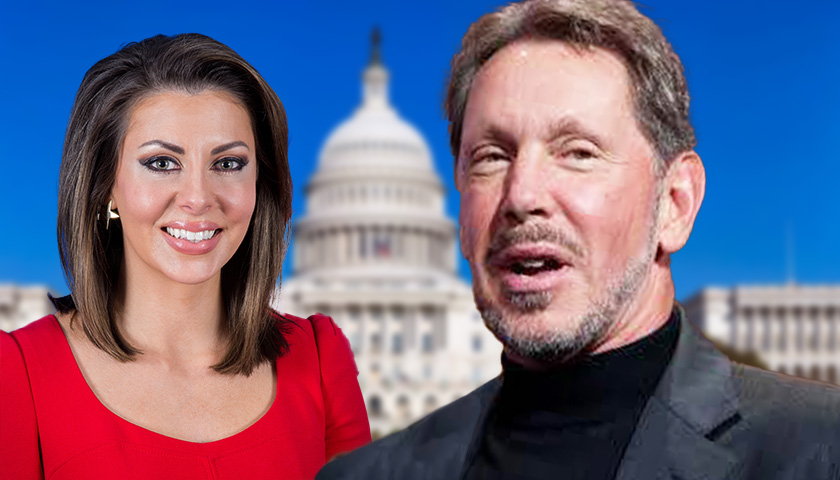 The executive chairman, and chief technology officer, of software giant Oracle, was revealed as the sole contributor to Tennessee Conservatives PAC, the Super PAC backing GOP Tennessee-5 House hopeful Morgan Ortagus, presents a clash of Silicon Valley values, such as attacks on those defending birth-gender in the Volunteer State.

Lawrence J. “Larry” Ellison donated $1 million to the Super PAC, according to the committee’s Friday filing posted on the Federal Elections Commission website at 12:19 p.m.

As the nation struggled with how much privilege to grant individuals choosing not to identify as their birth-gender, Tennessee has been at the forefront of defending parental rights and the validity of single-sex student athletics.

It also begs the question: Why Ellisson would stroke a $1 million to support Ortagus if she is not in sync with his values and the values of Oracle?

In March, Oracle opened offices in Nashville in anticipation of its new East Bank riverside campus that the company expects to create 8,500 direct jobs with the company.

In May 2021, Metro Nashville City Council unanimously approved $175 million in incentives to Oracle as part of the deal, as Tennessee Lookout reported:

Under the terms of the deal, Oracle will pay the up front costs of building a bridge, green space, park land and environmental remediation around a long-closed landfill. The company will then be reimbursed by splitting half of the future property tax revenue generated at the property with the city up to $175 million. . .

Cooper adviser Mike Jameson pointed out that Metro is under no obligation to raise the $175 million cap and has leverage over the company, because an array of future approvals, including zoning, greenways, and other aspects will require city approval. . .

Proponents of the Oracle deal said the arrival of the Texas-based firm positions Nashville to attract more technology jobs. In recent years, Nashville has passed economic development deals for Amazon and AllianceBernstein.

In September, the state of Tennessee committed an additional $65 million in incentives to Oracle.

Mayor John Cooper has said he is convinced that Oracle will work to reverse laws defending birth-gender.

The letter asserts that the business leaders would hold their state governments accountable for defending birth-gender and work to change their positions.

“We are deeply concerned by the bills being introduced in statehouses across the country that single out LGBTQ individuals – many specifically targeting transgender youth – for exclusion or differential treatment,” the letter said.

“As business leaders dedicated to equal treatment, respect, and opportunity for all – as well as to improving the financial and investment climate across the country,” the letter said. “We call for public leaders to abandon or oppose efforts to enact this type of discriminatory legislation and ensure fairness for all Americans.”

Afterward Oracle signed the letter, both Cooper and John Woolley, the president of Nashville’s LGBT Chamber, a trade organization, both saluted Oracle for supporting the trans community.

Oracle received a 100 percent rating from the Human Rights Campaign, one of the leading advocates for blurring gender identities and allowing individuals, including minor children, to choose their gender identity.

It was the 13th year in a row that Oracle earned its 100 percent.

Oracle’s corporate stance puts it on a collision course with how Tennessee residents want to live, as evidenced by the steps taken by the state’s elected officials.

Tennessee’s Republican Gov. William B. “Bill” Lee. “This legislation responds to damaging federal policies that stand in opposition to the years of progress made under Title IX, and I commend members of the General Assembly for their bipartisan work.”

I signed the bill to preserve women's athletics and ensure fair competition. This legislation responds to damaging federal policies that stand in opposition to the years of progress made under Title IX and I commend members of the General Assembly for their bipartisan work.

Two days after Lee signed the bill into law, the Associated Press posted an article, “Tennessee moves to the forefront with anti-transgender laws,” which characterized Tennessee as the state most prolific in its defense of birth-gender.

Lee also signed legislation to require school districts to alert parents 30 days before students are taught about sexual orientation or gender identity, letting them opt out of the lesson.

“Tennessee is taking the crown for the state of hate,” said Sasha Buchert, a Lambda Legal senior attorney.

The governor recently defended the school-bathroom rule. “That bill provides equal access to every student,” he said.

Two months later, after Lee signed into law legislation that protected gender-specific bathrooms for Tennesseans, Alphonso David, the then-president of the Human Rights Campaign, tore into Lee and threatened the state’s residents with a commercial boycott.

“Gov. Lee and Tennessee lawmakers are determined to discriminate against the transgender community and roll back the clock on equality instead of focusing on real problems facing Tennesseans,” David said.

“To be clear — Tennessee residents will suffer economic, legal, and reputational consequences of these bills, and we will hold those who are indoctrinating hate into our laws accountable,” he said.

Instead of backing off, the Tennessee legislature is working in this session to back up laws it passed in the last session, including one that calls for financial penalties for school districts that do not respect birth-gender in their student athletics.

However, Washington attorney Charles R. Spies is the lawyer hired by Tennessee Conservatives PAC to represent three voters in Tennessee’s 5th Congressional District, challenging a state law requiring individuals to live in the state for three years before seeking their party’s nomination for federal office–a law that could end Orgatus’s House campaign.

Spies is the husband of Lisa Spies, a fundraiser, and friend of Ortagus, and The Tennessee Star interviewed the attorney as he walked into an Ash Wednesdey Capitol Hill Ortagus event organized by his wife.