Stephen K. Bannon: ‘Kemp Is the Embodiment and the Personification of So Much of What’s Wrong on 3 November’ 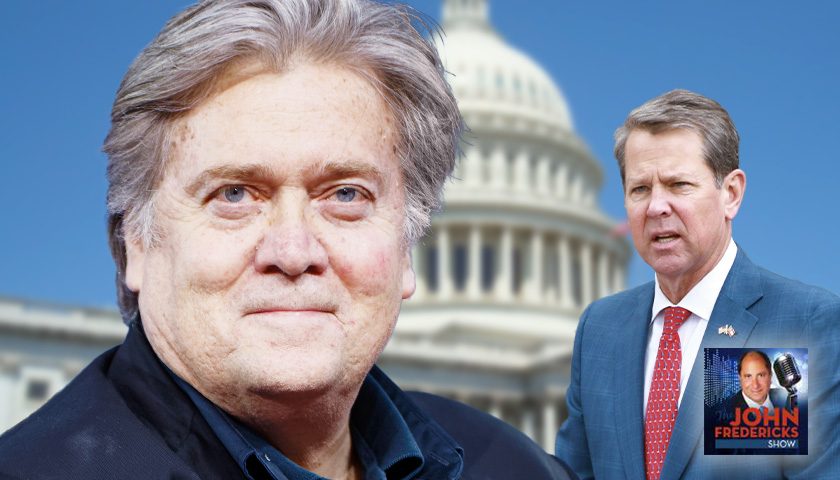 Fredericks: Joining us now, the one and only Stephen K. Bannon, host of the most famous, most-watched, most listened to biggest live television and radio show in the world, WarRoom. Ten to noon, John Fredericks Radio Network.

Bannon: It upsets you when they call that a podcast. (Laughs)

Fredericks: It’s a live show. It’s not a podcast.

Bannon: By the way, hey, I’m glad you’re doing the bus tour. I’m a huge supporter of the bus tour because those candidates need help right now. I cannot say highly enough how important May 24th is for Trump and the Trump movement.

So that bus tour is absolutely essential to get folks up to the ramparts, because the evening of May 24th is going to be the Alabama primary and the Georgia primary, and they’re going to be very important. Kemp and Raffensperger.

We have Jody Hice on the show today at 11:30. He’s in the movie Rigged. And of course, they banned all the ads up at Silicon Valley to go up to Zuckerberg. So now I think your bus tour couldn’t be better timed.

I think you’re going to get a real sense of how competitive this is going to be, because at least from the numbers so far, it doesn’t look particularly competitive, at least in the governor’s race.

Fredericks: We are losing. In fact, if we don’t do anything, we’re going to lose everything, right? I mean, Raffensperger is ahead. This is a disaster. How do we turn the corner in Georgia, Steve? You’ve been in this a long time.

You were chairman of the Trump campaign, in 2016. They brought you in as chairman. We were losing that. You turned it around. You pulled the biggest upset in the history of the Republic. How do we turn the corner in Georgia and win this election? What do we have to do?

Bannon: Well, as you know, I’ve not been particularly enthusiastic about where the endorsements went. If you’re going to take Kemp on, you got to really commit to … first off, you’ve got to spend money. You’ve got to put a lot of money into it.

The problem people have with him, and I have a huge problem with him, is that he was not only not helpful on the 3rd of November to get to the bottom of all the corruption, but he also went the opposite direction.

Now there’s a video out of him defending himself that he had nothing to do with the consent decree, that he’s totally innocent of all this and he’s being smeared by the hardcore 3 November people. But to think that you can just do a rally is not the fact.

I think you need bus tours like yours, and even more. You need a massive get-out-the-vote campaign, and if they’re sitting on a couple of hundred million dollars, you’re going to put massive resources into this.

The Kemp establishment is pretty dug in here, and the people are looking, I think, at his record and who can take on Stacey Abrams. And I think Perdue’s been a very uninspired candidate. So you are where you are.

But I think your bus tour is the first of what I think you have 25 things like that, and it has to be a massive get-out-the-vote or you’re going to be embarrassed on the evening of.

And I keep saying if Kemp wins, it’s going to be a rallying point for the Never Trump forces. It just is. That’s the reality, I think, that has to be dealt with. Plus, if you have this, Mo Brooks is already out in Alabama, so the 24th will be a culmination of, the next 60 days could be very painful.

And, you know, I think people have got to really get focus. When you are going to do these endorsements. I believe you have to come in with a full package. I mean, ground support. If you’re going to endorse somebody, you got to understand they got to win.

You see in North Carolina the other day, he’s the only guy who can draw a crowd. He’s the only guy that’s on message. There’s one thing for a rally and a great rally speech and the inspiration that gives and there’s another thing about actually getting people out and getting them to vote in these primaries.

And that’s two different things. And right now I think it’s all on the line, because if he does not have a next successful 60 days, remember, I was arguing for a field-clearing exercise in these primaries, and it looks like you’re not going to get that.

So the next 60 days for MAGA politics now to the other primaries all the way to the end of June. But I think the culmination of this phase of it will be the evening of May 24th and that will be in Atlanta, Georgia.

Fredericks: You think they need an influx of the Perdue campaign like $10 million?

Bannon: I think more than that. I wouldn’t even put a number on it. The number is going to be whatever number gets you to win. Plus you got John Fredericks on this bus. That’s great but I think you need 10 … John Fredericks ought to be camped out in Georgia between now and the 24th.

You got the issues in the courts. You’ve got a lot of activity going on but he’s the personification of this establishment that just came out immediately, and said everything’s fine.

He represents the Bill Barr, Raffensperger Republican establishment that quite frankly just wanted to move on, get rid of Trump, you know, to take their lumps, and at that time they were hoping to hold the Senate, had Mitch McConnell save them.

Remember, this is all back to November of 2020 and so, therefore, if you’re going to go in and really come up with a candidate, a creative candidate, not Vernon Jones. Morning Joe is paying a complete diatribe on cultural issues with Joe Scarborough saying how blacks are conservative, literally taking the playbook of Steve Bannon.

I’ve been saying this for years, but particularly on the cultural wars, we’re going to have a huge turnout of African Americans and Hispanics that are going to vote for us because they’re the most conservative along with the Hispanics around the family group and the family.

Listen to the interview here: