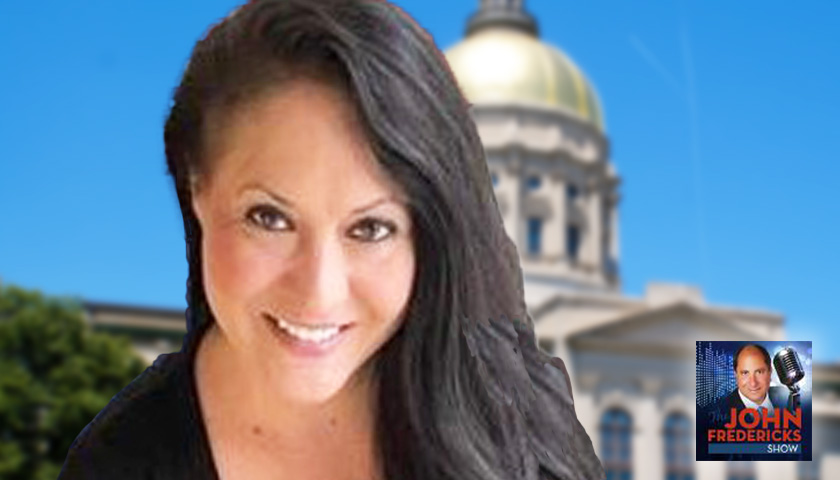 Fredericks: Let’s get to Angelic Moore, Angelic, candidate for state Senate District 6 on the Republican side. Angelic, thanks for being with us.

Moore: Hi. Good morning, John. Thank you for having me this morning.

Fredericks: All right. Very quickly, before we get to the issues, tell me about your campaign, and who you’re running against. Give us the details.

Moore: I’m running for state Senate District 6 here in Georgia, not to be confused with the Congressional District 6, though some of it overlaps. So the district is 48 percent Cobb County and 52 percent Fulton County.

It includes East Cobb, Smyrna, Winding, and Sandy Springs – inside the perimeter – Buckhead, west of Walter Road. And I do have a primary, and he’s a gentleman named Fred Glass, since you asked.

And so I don’t know him. I’ve not met him yet.  I did ask to speak with him before qualifying started, and I was told he did not want to speak with me.

There’s one lady who’s run twice against a state representative named Sharon Cooper. I lose that name right now. But there’s also a gentleman named Jason Estevez. Her name is Louisa. And his name is Jason, and he sits on the Atlanta school board.

Fredericks: When they changed the boundaries of the district, what is it now? Is it a Democratic district?

Moore: It still leans Democrat. However, it’s one of those that we can flip. It moves further to the Republican side. The numbers are almost 50/50 now.

Moore: Yes. So if you go in there, run a hard campaign and win this primary, which I completely plan to do, and then go in there and talk to the middle, get that swing vote, the people who don’t usually vote, make sure they turn out to vote, we can take over this seat.

Fredericks: Would you consider yourself running as the MAGA candidate in the race?

Moore: I’m actually a constitutionalist and a Republican who leans Libertarian. I supported Bob Barr when he ran for President. And so that’s who I am. I like to call myself a right-leaning Republican, others say more center. So that’s who I am.

Fredericks: And you wouldn’t consider yourself in the Trump movement, America First movement?

Moore: Actually, I do respect him and I appreciate everything he’s done. And I do certainly wish he was at my office right now. And I appreciate his policies. So, yes, I would. Especially like what’s going on now with Joe Biden being President.

And people need to wake up and understand that we need to have especially today when you mentioned election integrity to go back and be able to have access to these ballots in 2020 retroactive and going forward so we know who actually won and we know what’s going on in our state.

Moore: I don’t know. I do know and believe that because I do work with William County Republican party that there were illegal votes cast. How many that adds up to across the state? I’m unsure.

However, in my heart, I do believe that. I don’t have the numbers because we don’t have access.

Fredericks: Where do you live? Do you live in Fulton County?

Moore: I didn’t back anybody vocally, but I did vote for Trey, only because I didn’t know Susan. And that’s the fundamental thing when you know someone …

We have John Ossoff tipping the Senate and the Libertarians don’t want any part of talking about the transgender issues or the cultural issues or anything else. Angelic, help our audience understand. Why should we get excited about your campaign based on those answers? And I’m not arguing, I’m just being honest.

Moore: That’s a fair question. I said I lean this way and I did vote for him. And to go back to one of the questions, I am for constituents. Constituents liaison, Georgia first, America forever.

And so what I want to do is help constituents and you talk about, okay, well, the Libertarians don’t want to talk about this or that.

Well, I do. I’m not saying I am, I said that I do agree with them on some issues and I do agree with Republicans as well. And I am a lifelong Republican who stands up for what I believe in and I will fight with people, especially to the end.