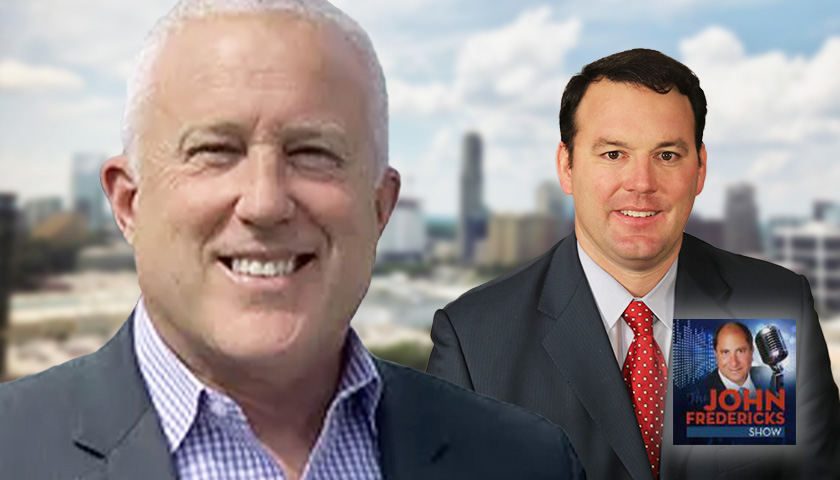 Fredericks: Joining us now, Bill White. Great to have you with us, Bill.

White: Good morning. And congratulations on the rally. I have a lot of family there, and I’ll get them all to tune in. Drive safely. (Chuckles)

Fredericks: Yes. Well, we’re also moving there at the end of May, I think, June 30. So we’re going to move to Cary, just so we can be closer to Buckhead. How did this thing blow up on us?

White: Well, a couple of things. So you look at these other cities across the state of Georgia. Sandy Springs took a few years. Brookhaven took three years. The ones that the Georgia Legislature that just passed out, which was four cities in East Cobb, is getting the right to vote by a small place called East Cobb, Mapleton, and Lost Mountain, they’re all getting the right to vote.

I think this is going to have to wait until next year. Listen, we’ve got a couple of days left. They were working on trying to squeeze a bill through, and Duncan got a whiff of it. This guy is the biggest clown under the Golden Dome, but he’s got the power.

So that showed us a pathway forward. And I think you’ll appreciate this. There’s a huge forward momentum on this. We have just been told by the state GOP that we will have a ballot question on the entire statewide Georgia Republican ballot on May 24th on Buckhead City.

And it’s a big deal because all of our Republican voters in the state of Georgia, I wish the Democratic Party would do it, too, are now going to have the chance to vote and let their voices be heard so that the Georgia legislature and our governor hear their voices.

I expect that that poll will have a 70 plus percentage result. We’re going to be marketing it out to the people of Georgia who are smart. They want Buckhead to have the right to vote.

White: Very well respected. He doesn’t do these push-poll things. And he came back with strong support from a wide variety of Georgia Republican voters. 75.1 percent want Buckhead to have the right to vote now.

And this Jeff Duncan just passed a tax credit bill where he thinks that’s going to help solve Buckhead crime. The money can’t be used to hire a single police officer. It’s going to foundations. He’ll take money out for administrative costs and cops will never see the money.

So this is a joke, John. You’ve been saying this all along. We also heard that Governor Kemp tried to scuttle this ballot question, which I found out this morning.

And that’s very disappointing because the results of our polling, which is the third one we’ve done, is that Buckhead wants the right to vote, including even people who would vote no. 75 percent of the people in Buckhead want to have this on the ballot.

So we’re going to have to wait until next year and guess what? I think you’d appreciate this. We’re supporting candidates who will give us the right to vote next year. Burt Jones unlike his opponent, Butch Miller who basically lied to our face John said, oh, I’m going to put this out, I’m going to support it, I’m going to stand up, defend it and get it out on the Senate floor and he did nothing.

So Burt has publicly said he’s going to pass Buckhead City in the Senate in the first 10 days as the new Lieutenant governor next January as a priority of his legislative session.

Listen to the rest of the interview here: