Virginia Delegate Bob Good on Democrats: ‘Nothing That They’re Doing Makes Sense Unless You’re Literally Trying to Destroy the Country’ 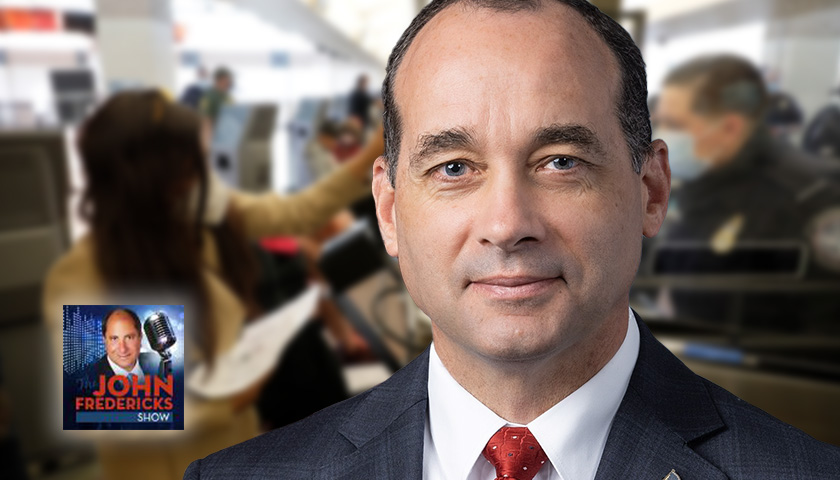 Fredericks: Joining us now Bob Good! He is the congressman from the Fifth District in Virginia. Republican Bob Good joining us now. Congressman, great to have you as always, sir.

Good: Good morning, John. Great to be with you. Thanks for having me once again.

Fredericks: Okay, let’s get to March March Madness, and then we’ll go everywhere else. I’m picking Villanova to win it all. What about you?

Fredericks: You go with Duke. I think Duke gets beat by North Carolina and then Villanova beat Kansas and Villanova beats NC. Those are my picks.

Good: Well, North Carolina is certainly playing well at the right time, that’s for sure.

Fredericks: It’s all about peaking, Bob. Peaking. That’s the key. Now, Bob Good, we got so much to talk about today so let’s get right to it. First off the bat, the Transportation Security Administration today this is breaking news, announced new standards for screening transgender, non-binary, and gender-nonconforming airline passengers at airport checkouts.

I’m trying to figure out Good what this means. The agency said the changes are to improve the screening experience for all passengers and announced them on the International Transgender Day of Visibility. They said that they have to change the patdown methodology if you declare yourself as gender-neutral.

Good: Well, John, that’s one of the greatest threats to the country. Of course, we’ve got to fix that. But think about where we’ve come. We’ve got a nominee to the Supreme Court who will not define or cannot define what a woman is.

How is that justice if she gets confirmed and certainly it looks like she will be, how will she protect the rights of women when she does not know what a woman is or refuses to say what a woman is?

Whether you’ve got Disney being revealed on what their real agenda is to try to indoctrinate our kids, to change how they think, to change the culture or whether you’ve got what’s going on in our school systems, we don’t follow the God created science of two genders. And this is the most important thing in the country is how we screen transgender individuals.

We’ve got NCAA Champions in swimming who are men competing in women’s sports. It’s incredible. And there are no boundaries to it. We’ve got to stand up and call it out and follow the science of two genders and protect the rights of everyone.

If transgender men want to compete in sports, they should compete in a separate league and a separate sports league against one another. They shouldn’t be competing against women, for example.

Fredericks: Yes. We have women’s Title IX, right? Men, they could have transgender I guess. You could do that. I’m not sure how that would work. But look, we’re just getting to the point now where we’re reaching absurdity.

I was asking somebody the other day, cut the malarkey out. What is the percentage of gender-neutral people in the country? It’s like one 10th of one percent. And even that is asinine. I get that sex change thing. You are born in one sex, you want to be the other.

I kind of get that. But what the hell is gender-neutral? I don’t even know what that means. Do I get up today and say, you know what? Today I’m a rabbit. I mean, it’s just beyond the pale.

I don’t want to be insensitive. Let’s get to Title 42. So let me get this straight. Last week, Joe Biden says he is going to extend the mask mandate on domestic airline travel. It’s going to extend it. It was expiring on April 18th.

He’s going to extend it two months and then he gets on TV and he says another variant is coming. Fauci gets on. We could have a lockdown. It’s coming from China.

There’s another variant coming from Singapore. We got mail-out ballots. It’s bad. He says that. Then, on the other hand, he says that he’s not going to extend Title 42, which is the only thing stopping hundreds of thousands of additional illegals from coming over the border.

And with Title 42 is you get to stop them and send them back because of COVID. So we got to wear a mask on a plane for another two months.

He’s warning us that there are going to be restrictions and lockdowns to get the mail-in ballots. But then he’s opening up the border for anybody going over without a test, without a vax, without a mask, without anything. Can you square this logic, sir?

Good: Of course not, John. We’re having about 7000 illegal border crossings a day right now and this administration is preparing for that to double or triple because of this change in policy.

He’s got three years to go. He wants to facilitate as many illegal border crossings to change the country by the time that he’s got left with three years here. Unbelievable!

As you said, the stupid restrictions aren’t making any difference for any American with these masks on planes. We’re sitting elbow to elbow on a plane. We can take our masks off to sip a Coke or eat a cracker, but we got to have them on the rest of the time. How crazy and ridiculous it is.

Everybody knows it’s stupid. Everybody knows it doesn’t make any difference. But it’s government control. And yet we don’t care about the hundreds of thousands that are illegally crossing our border.

And we want to take away one tool that this administration inherited from the Trump administration to turn away those who present a health risk to the country. It’s unbelievable.

But it’s on purpose, John. They’re doing this on purpose. They want this to happen. Every resource they put to the Southern border is to facilitate more border crossings and more illegals coming into our country.

Fredericks: What is their ultimate goal, Bob? And let’s just cut to the chase here and stop all facades. They know if they do this, 500,000 people are going to come a month illegally.

That’s what even the Democrats are estimating, the administration. So it’s probably 750. So over a four-month period, you’re going to get another three million. We don’t even know where we’re going to put these people.

Good: The estimates I’ve seen, John, or as many as 18,000 a day. It could surge from 7,000 a day to as many as 18,000 a day is what those on the border are saying but they fear that it will happen. I had a small business owner in my home county tell me on the phone yesterday that nothing they’re doing makes sense unless they hate the country.

Nothing they’re doing on energy, on crime, on the border, on spending, on inflation. Nothing that they’re doing makes sense unless you’re literally trying to destroy the country.

You could not do more harm broadly, specifically on the border but more broadly with the policies, they’re pursuing if you are doing it on purpose to harm the country.

I said that I was on a budget hearing with the budget director, Shalonda Young, from the administration and I said to her and I opened my remarks in the hearing in my time of questioning, I said, tell me it’s this administration economically and fiscally incompetent and they don’t know the harm they’re doing with this budget they propose? Or do they actually know the harm that they’re doing and they want to bankrupt the country on purpose? Which one is it?