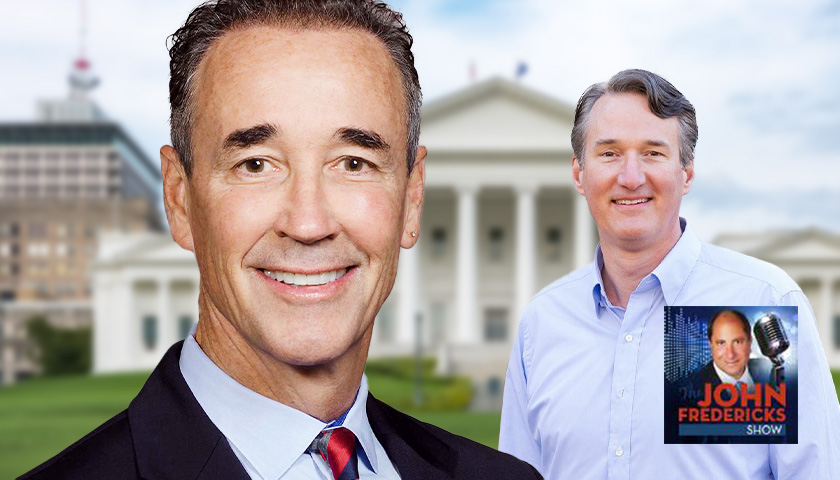 Fredericks: Joining us now is State Senator, Petersburg Democrat Joe Morrissey. Joe, great to have you with us.

Morrissey: Good morning, John. How are you?

Fredericks: I’m doing fine. Lots to talk about, so little time, Joe. Governor Youngkin, I thought this was fascinating, basically said this. I’m reading the statute here, and it says that the number one job of the General Assembly is to pass a budget.

And you guys went home and didn’t pass a budget. He said I don’t think so. You got to all get your asses back in on April 4th and pass me a budget. Now, by the way, I want a tax cut in that budget, and you’re not going home until I get one because that’s your job.

And oh, by the way, I’m going to start putting ads up on TV, pressuring you to pass my tax cut. Joe Morrissey, pro-business, moderate Democrat. Basically, you’re running Virginia’s government. What say you, Joe?

Morrissey: Well, I like your summary, John, and good morning to you and to your audience. All right, so let’s just break it down. First of all, we’re going back on the fourth. It’s going to be all about 15 minutes to 30 minutes.

They’re going to pass a resolution and they’re going to agree to come back at a later time. That’s number one. Number two, there is no budget now. There will be no budget on the fourth. Why? Because the budget contraries.

Those are members of the House and the Senate. Democrats and Republicans have yet to agree on a budget. In other words, they haven’t even agreed among themselves before it is agreed on by the whole body, and that is before the governor then sends his amendments down.

I tend to believe, John, that you give the majority of it back to the people. If you taxed them and you did not spend it, one might say over-tax, then rebate it to the people. That’s my kind of Libertarian philosophy that I just agree with.

As far as your comment about the governor running ads, rather unique. Never seen it happen before. But it appears that Governor Youngkin is still in campaign mode.

And the best I can tell, John, is that he feels if he runs campaign ads, that will persuade the electorate to call the legislators and say do what Governor Youngkin says.

I’m not sure that it works out that way. So let me just pause for a moment and try to, you know, maybe you can distill it down a little bit further and we’ll try to make it clear for your audience.

Fredericks: Okay. So he’s running ads. Look, when Terry McAuliffe wouldn’t gather the session out of conference to come back to pass Medicaid expansion, I mean, he put tremendous pressure on people in districts. This really is nothing new. I guess it could backfire. But I think the bigger thing is Youngkin playing hardball here.

Morrissey: Right. He is.

Fredericks: And what he said is kind of true. It’s like we got the surplus. We got all this money. Virginians are suffering from inflation and gas prices. We need to give it back and not spend it on nonsense. And that’s where the rub is, right.

Morrissey: I don’t think you ever spend it on nonsense. But you got to decide, if you have a surplus, here’s the way you have to look at it. You’ve got to look at it from a fiscally prudent standpoint. That surplus is there now.

There is no guarantee whatsoever it will be there in two, three or four years. So don’t spend it on programs that need to be continually financed because you’ve only got the money there now. So if you do spend it, spend it on a one-time program.

But the better course, the more prudent course is to do this: If you’ve got that money, there’s no requirement that you spend it. If you’re in a household and the family has a surplus of $5,000, you don’t have to spend it on a vacation or new clothes or an upgraded car because you don’t know what will come the next year or the year after that that may be a more important expenditure.

So I’m a proponent of if you don’t give it back, then save it, put more of it into a rainy day fund. That’s number one. That’s my philosophy. It’s a Conservative-Libertarian philosophy. With regard to playing hardball, hey, listen, that’s what various governors do.

It’s part of the game. It doesn’t bother me. It doesn’t offend me. When I saw that he’s running commercials, I go, okay. Kind of. So I know what my philosophy is.

Fredericks: You’re the deciding vote. Let’s just cut to the chase here. It’s all said and done. Louise Lucas and Ben Tribbett can send out as many tweets as they want. She has no power. All the power is vested in one guy right now in the budget. And that’s you.  That’s why you’re on the show today.

Morrissey: Okay, but here’s … John, almost there. But let me just connect the dots a little bit better. Assume, arguendo (for the sake of argument), that I [am] the deciding vote, and I would never take credit for that or say that, but first, John, what you’ve got to have though, remember, is a budget to vote on.

Fredericks: And the Democrats control the conferees in the Virginia Senate, right?

Morrissey: Yes. And the Republicans control the conferees in the House. So you have to have an agreement there. Now, the important question is, okay, once you get that budget and it will occur, and I vote for it and other people vote for it, then it goes up to the governor and now you get to the important point.

Then it gets through there, then it comes over to the Senate, and I agree my vote will have an impact on whether the governor’s amendments get passed. Are you with me?

Listen to the full interview: