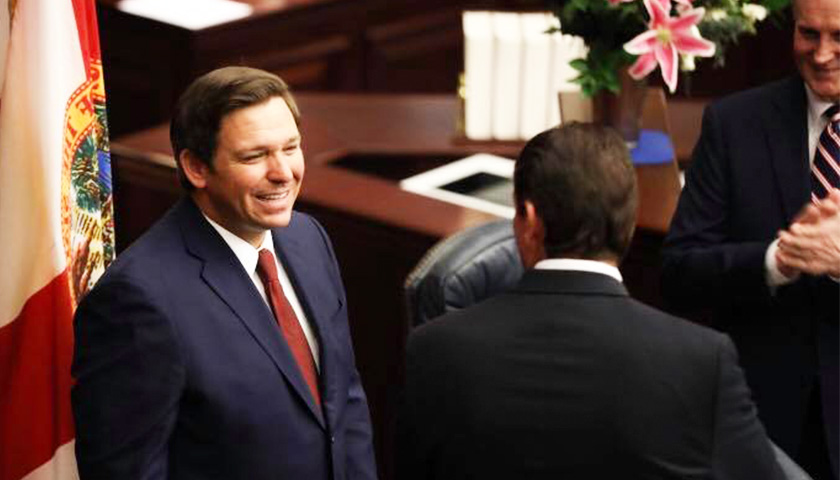 Not long after signing the “Anti-Grooming” Parental Rights in Education bill into law on Monday, Governor DeSantis’ office fielded questions about concerns related to possible boycotts of Florida businesses.

The legislation, which bans educators from exposing students from kindergarten to third grade (5 to 8-year-olds) to detailed lessons on gender identity and sexual orientation, was dubbed by critics as the “Don’t Say Gay” bill.

But among Americans, the proposal enjoyed broad support. One poll by Politico/Morning Consult found that 52 percent of respondents agreed that young children should not be taught the sophisticated concepts underpinning gender and sexual ideologies. Only 33 percent opposed the bill, while 15 percent said they had no opinion.

However. the activist Left in Florida and across the country – using the slogan but not discussing the details of the measure – generated heated opposition to the legislation. This opposition has included protests and employment boycotts aimed at the Disney Corporation.

Christian Pushaw, a Governor DeSantis spokesperson, tweeted that a reporter had inquired about possible backlash in Florida from the new law.

The reporter said  “in other states we have seen boycotts and business impacts from controversial bills, is this a concern in Florida … that tourism could be impacted, as it still rebounds from the pandemic.”

Pushaw’s response first noted the strong tourism numbers and explained why people are choosing to come to Florida.

Pushaw said, “Last year saw the highest level of domestic tourism in the history of our state. In both Q3 and Q4 of 2021, tourism in Florida exceeded the same quarters of 2019 pre-pandemic levels. So Florida is one of the few places in the world where more people are visiting than before the pandemic … Many of the tourists in Florida have visited us from states with mandates and restrictions, to enjoy the freedoms and sense of normalcy that Florida has become renowned for, under Governor DeSantis’ leadership.”

The governor’s spokesperson added, “These are things that everyone can appreciate regardless of their gender or sexual orientation. Therefore, we’re not concerned about boycotts or other economic harm to Florida as a result of any legislation.”

Last summer DeSantis was clear in not backing down to corporate interests when he said, “if you are in one of these corporations, if you’re a Woke CEO, you want to get involved in our legislative business, look, it’s a free country. … But understand, if you do that, I’m fighting back against you. And I’m going to make sure that people understand your business practices, and anything I don’t like about what you’re doing.”

In addition, last year the National Collegiate Athletic Association (NCAA) issued a statement signaling it could pull championship events from states that altered the eligibility status of transgender athletes. However, DeSantis signed a transgender sports bill and said, “If you don’t want to hold an event in my state, you know what, I got a lot of events in my state.”

On Monday, Pushaw reiterated that position when she said, “No amount of money would convince Governor DeSantis to change his position. He will always stand for parental rights and protecting children.”