Hot Mic at Metro Nashville Board of Education Meeting Catches Board Member Saying She Wants to Set Sen. Marsha Blackburn on Fire 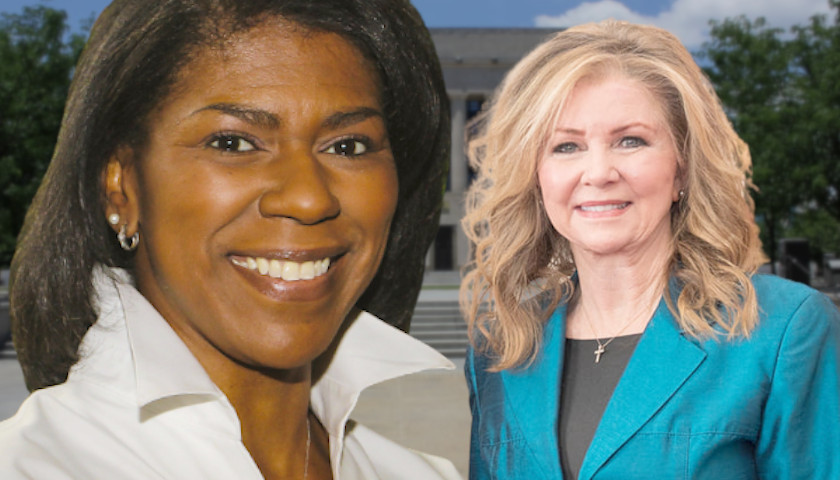 A woman at a Metro Nashville Board of Public Education meeting was caught on a hot microphone saying she wants to set a U.S. senator from Tennessee on fire.

Sources familiar with the incident have confirmed to The Tennessee Star that the woman who made those comments was Metro Nashville Public School Board member Sharon Gentry.

A source told The Star that Dr. Sharon Gentry was the board member who hoped for Blackburn to be set ablaze.

Gentry did not immediately return a comment request, but several tweets also indicate that it was Gentry.

Nashville @metroschools board member, in what appears to be Dr. Sharon Gentry, caught on a hot mic expressing "can we just set" current US Senator @MarshaBlackburn "on fire" during a board meeting. Just another day in the out of control MNPS School board. pic.twitter.com/Gnpv01vns8

Members of the @MetroSchools School Board were caught on a hot-mic during a board meeting wishing that they could "just go set Marsha Blackburn on fire."

Blackburn asked Jackson whether she could define the word “woman,” which the potential SCOTUS Justice said she could not do.

It has not been confirmed whether the person caught on the hot microphone is a member of the board, and the chairwoman of the board, Christiane Buggs, did not return a comment request from The Tennessee Star.

Blackburn made a splash at the confirmation hearings for her tiff with Jackson over the definition of the word woman. Jackson said she was not a biologist, and thus could not answer the question.

Here is the full exchange:

Blackburn: “In the United States v. Virginia … the Majority Justice Ginsburg stated, ‘supposed inherent differences are no longer accepted as a ground for race or national origin classifications, physical differences between men and women, however, are enduring. The two sexes are not fungible. A community made up exclusively of one. Sex is different from a community composed of both.’ Do you agree with Justice Ginsburg that there are physical differences between men and women that are enduring?…”

Blackburn: “Can you provide a definition for the word ‘woman’?”

Jackson: “Can I provide a definition?”

Jackson: “Not in this context – I’m not a biologist.”

Blackburn: “The meaning of the word ‘woman’ is so unclear and controversial that you can’t give me a definition?”

Jackson: “Senator, in my work as a judge, what I do is I address disputes. If there’s a dispute about a definition, people make arguments, and I look at the law and I decide. So I’m not …”

Blackburn: “The fact that you can’t give me a straight answer about something as fundamental as what a woman is underscores the dangers of the kind of progressive education that we are hearing about. Just last week, an entire generation of young girls watched as our taxpayer-funded institutions permitted a biological man to compete and be a biological woman in the NCAA swimming championships. What message do you think this sends to girls who aspire to compete and win in sports at the highest levels?”

Jackson was lambasted online for refusing to provide a definition.

The debate over the definition of the word has raged for a while, but has been recently renewed after biologically male transgender swimmer Lia Thomas won the women’s 500-yard National Collegiate Athletic Association’s (NCAA) championship a little over a week ago.