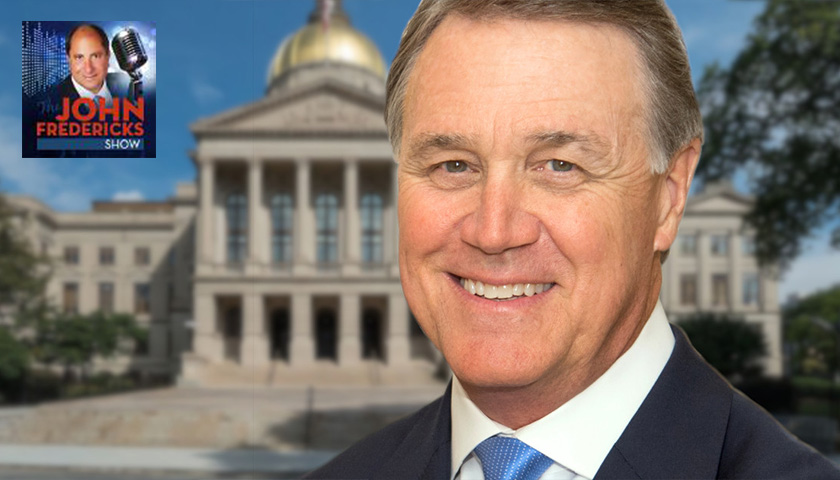 Fredericks: David Perdue joining us now, running for governor, Georgia. That’ll be decided, primary May 24th. And zero chance of that being a runoff.

But I tell you what, you were at Mar-a-Lago. I was there on Wednesday. I said this on TV. I want to say on the radio, I’ve heard Trump endorse candidates for going on now, five years. I probably heard 150 of them – or more.

And he does the press releases, but I’ve never seen him more passionate about an election than yours in my life. The other thing is, if you know Trump, he doesn’t really get emotional, right? He’s kind of matter-of-fact.

He has a great sense of humor, but he’s not one for crying at movies, if you will. It’s just not that type of personality. But he introduced you at that event in Mar-a-Lago. I saw more emotion in the president endorsing a candidate than I’ve ever seen.

And three times he said “hey, this is very important because …” and then he ended it by saying “and the other thing is, David Perdue is my friend. This is important, because he’s my friend.” And if anybody gets loyalty, it’s me. So I really got that.

So, look, you need to take that, go forward. But I’ve never quite seen an event like that. And how are we going to take that and transform that on Saturday and then take it on the campaign trail?

Perdue: Well, first, John, thank you again for being there and talking to me. It was very personal. I honestly have not seen him do that publicly either. I was moved by that.

But I think it’s because he knows that he and I have fought alongside each other to get him elected in ’16 to get the agenda that created the economic turnaround that it did under the Trump administration when he was president.

And now since November 20th in 2020, I’ve been fighting alongside him to find out what happened. Those elections were stolen in Georgia in November, from him and me. And I think he knows that. He knows what I’ve been doing in courts, filed three lawsuits.

We asked for special sessions. And I even asked for the resignation of – I know a lot of your listeners like this guy, but the Secretary of State, Brad Raffensperger, because he was just no help. And so President Trump knows what’s on the line here.

He knows that if we want a conservative in the White House in ’24 and if we want to get the Senate majority back in ’22, we have to win this governor’s race. And I think President Trump understands that the MAGA voter out there in Georgia will not vote for Kemp in November.

Fredericks: I want to get to this new work that Greg Bluestein has coming out in the Atlanta Journal-Constitution, the kingpin of fake news, although I do like Greg. He’s been covering politics there for a long time. Let me ask you something.

In the book, which I think was also highlighted in Politico – I think this is really important, okay? For everybody to understand what exactly went down after November 3rd and before your runoff, right? So I’m just going to start with that.

And according to Bluestein, you told Brian Kemp unequivocally that you were making this decision, not your team, and that whatever your team said, you are overriding it.

And that you unequivocally asked him point-blank, eyeball to eyeball, to call a special session right then in the next week in order to get to the bottom of the election fraud on November 3rd.

It’s also been reported at that meeting that’s been the first time we’ve seen this, face to face with Kemp in a meeting that you called and unequivocally asked him to do a special session that Kemp refused to do it. Looked you in the eye and said, I’m sorry, I’m not going to do that, and gave you mumbo-jumbo legal reasons why, and then now they have disputed that meeting and they’re saying it’s not true, that Bluestein made it up.

Did that meeting happen? Did you ask Brian Kemp, David, eyeball to eyeball, face to face, that you wanted him to call a special session right then to get to the bottom of November 3rd? True or false?

Perdue: It’s absolutely true, 100 percent. I normally don’t talk about private meetings like that, but this is one, because the governor has said that that meeting did not happen [which] is outrageous. It happened at Truist Park. Somebody else was there, too, Kelly Loeffler.