Commentary: Biden’s Handlers Are Preparing to Eject Him and Kamala 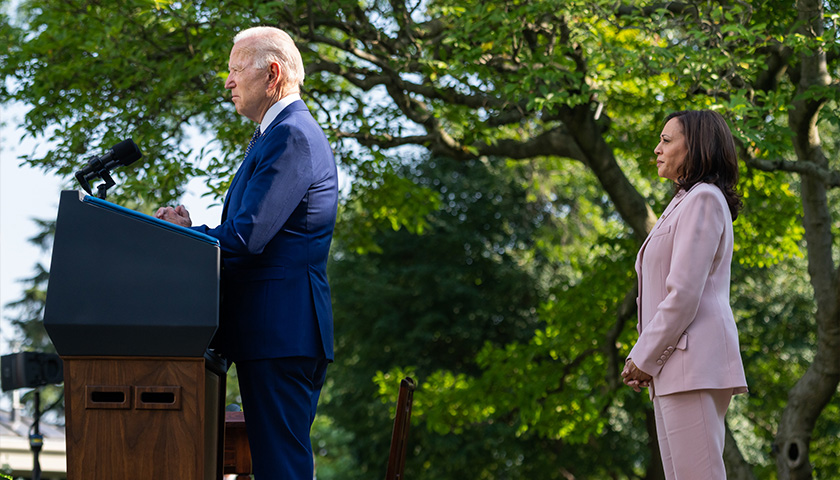 I sense a disturbance in the force. In fact, I’ve been feeling the tremors for a while. Back in January, I wrote a column for American Greatness called “The Coming Dethronement of Joe Biden.” In it, I noted that Biden’s appalling performance as president would sooner or later—and probably sooner, given the ostentatious nature of his multifaceted failure—lead to his removal as president.

I should have added that it wasn’t Biden’s performance per se that would lead to his downfall. The problem, rather, was the way his performance was undermining his—and therefore his minders’ and puppetmasters’—political power. As Saul Alinsky, community organizer to the stars, noted, the “issue is never the issue.” Accordingly, the people who put Joe Biden in power—I cannot name them, but I know they are the same people who keep him in power—do not care about inflation, rising gas and food prices, COVID lockdowns or mask mandates, the porousness of our Southern border, the threat of war with Russia, or the myriad other issues that worry ordinary voters. I am quite certain, in fact, that the word “voters” brings a vaguely contemptuous smile to their faces.

They are not troubled by the suffering of the people, indeed, they approve of a certain amount of suffering. Suffering produces dependency; and dependency, in turn, is like an insurance policy for those who cater to it: the bureaucrats who fill the troughs that feed the populace. The point, of course, was never to end the dependency but to manage in such a way as to perpetuate and expand it. Joe Biden is an errand boy, a figurehead, in the metabolism of this great (not to say Great Society) act of political legerdemain.

Back in January, I compared the conundrum that Joe Biden presented to The Committee that keeps him in power with the conundrum that Richard Nixon presented to the elites of his day. Nixon was hated by all the beautiful people of his day, but before he could be disposed of the elites had to address the problem of Spiro Agnew, who in his own way was nearly as preposterous as Kamala Harris. Fortunately for the anti-Nixon forces, Agnew was also corrupt in a pedestrian, easy-to-demonstrate sort of way. So all that the forces of light and virtue had to do was produce evidence of his glomming on to paper bags full of pelf in exchange for favors rendered and, presto, Agnew was history.

Kamala Harris is more of a problem. She is at least as appallingly incompetent as her boss, and no less challenged rhetorically, as her alarming performance in Poland and Romania a week or two back demonstrated. But Harris will not be as easy to shift as was Agnew. I have heard nothing about actual bribery, and acting as the warm bun for Willie Brown’s bratwurst may be in dubious taste but is not actionable.

But Biden’s—and Harris’—polls continue to crater, with 60 percent of respondents disapproving of the job Biden is doing, and 50 percent “strongly” disapproving. It’s the worst showing yet, and many commentators are rubbing salt into the wound by stressing the adverb: We’ve been traveling down this road for months, they say, and so far every “worst yet” turns out to be tomorrow’s “hold my beer” moment.

The last several days have been full of wonder at the New York Time’s admission that, guess what, Hunter Biden’s “laptop from hell” was not—as Joe Biden claimed—“Russian disinformation.” Nope, everything that Donald Trump said to Leslie Stahl about it was true. Everything the New York Post said about it was true. Twitter and the rest of the regime media pronounced a damnatio memoriae on the Post and anyone who dared publicize the scurrilous story. The poor computer repair chap who found and publicized the dirt, political as well as sexual, on Hunter’s laptop was hounded and driven into bankruptcy. (Remember Jonah Goldberg on that poor fellow? I do. “Wait you believe the computer repair shop story? Like at face value?”)

The truth was there, staring everyone in the face. Remember Tony Bobulinski? He is the former Navy officer and businessman who was set to start a financial company with Hunter and Jim Biden, Joe’s brother. As I noted at the time, just before the 2020 election Bobulinski demonstrated, with copious contemporary documentation,

that various Chinese entities, all of whom—like all things Chinese—are ultimately answerable to the party, have invested heavily in the Bidens via various business enterprises of Joe’s son Hunter. We are talking about tens of millions of dollars.

Now, why would the Chinese do this? Out of some misplaced humanitarian instinct? No, they did it in order “to capitalize on the Biden name.” At the time, remember, Joe was vice-president of the United States. That was all that Hunter had to offer. But it was, the Chinese wagered, quite a lot. Many thought that Joe Biden might be president, and it turns out they were right. It was, in short, “influence peddling of the grossest and most spectacular kind.” As I said then,

All that information about Bobulinski came from an interview with Tucker Carlson. It was about the only place you could find his name. Searches for him on CNN turned up zilch: “search not found.” We’re talking about a week or two before the election. Everything not friendly to Biden was memory-holed. Hunter’s laptop, of course, but also the evidence that Bobulinski produced showed that, contrary to Joe Biden’s direct testimony, Joe did talk to Hunter about his business. In one communication, equity stakes for the new company are spelled out. Ten percent is to be held by “H”—that’s Hunter—for “the big guy,” “my Chairman,” i.e., Joe Biden.

Which brings me back to the disturbance in the force with which I began. Why do you suppose that the New York Times has decided, finally, at this late date, to acknowledge that the story that the New York Post broke about Hunter’s laptop was true? The Times, like the rest of the fake news establishment, like virtually all of social media, buried the story, screaming loudly that of course it wasn’t true, of course it was Russian disinformation, mediated somehow by that consummate Putin puppet, Donald Trump. Fifty-one “intelligence experts,” remember, signed an open letter denouncing the story and pronouncing anathema upon Donald Trump. Presented with evidence that they were wrong, every one of that disgusting crew—John Brennan, James Clapper, and the rest of the anti-Trump deep state coven—refused to apologize.

Many people seem to think that the reason that the story of Hunter’s laptop—which is just as much about Joe Biden’s perfidy as it is about Hunter’s perversion—has emerged now is because it can no longer do any serious damage. The election is over, Biden won—at least, he was declared the winner, which is not quite the same thing, although it does mean that he gets to live at 1600 Pennsylvania Avenue.

But I wonder if there isn’t something else going on. The news is full not only of stories about the New York Times fessing up, sort of, about the contents of Hunter’s laptop, but also of stories about how Hunter is likely to be indicted for tax fraud. In one sense, that is not news. I wrote about it at the end of 2020 when Hunter announced, sotto voce, that he had been informed that he was being investigated by the tax authorities. But in another sense, I suspect, that news, like the revelation from the New York Times that, what do you know, all that stuff about Hunter’s laptop was on the level, like Joe Biden’s bizarre suggestion a couple of days ago that “everybody knows somebody” who has taken nude pictures of some lover and then used them to “blackmail” the person—all that has a different valence now that the Biden Administration is seriously underwater and there are no lifelines in evidence.

The issue is never the issue. I suspect that Joe Biden is being prepped for ejection. Exactly how it will happen I do not yet know. But he is on the threshold, or possibly has even passed the threshold, where he could appear to govern. His minders understand this. They must be the ones to replace him, otherwise they themselves risk being replaced, which would be intolerable. As I say, it’s not entirely clear yet how the defenestration will take place. Obviously, Kamala will have to be dealt with first, and she will be. Look for some ground softening stories such as the Times just served up about the laptop. They won’t be long in coming.

Roger Kimball is editor and publisher of The New Criterion and the president and publisher of Encounter Books. He is the author and editor of many books, including The Fortunes of Permanence: Culture and Anarchy in an Age of Amnesia (St. Augustine’s Press), The Rape of the Masters (Encounter), Lives of the Mind: The Use and Abuse of Intelligence from Hegel to Wodehouse (Ivan R. Dee), and Art’s Prospect: The Challenge of Tradition in an Age of Celebrity (Ivan R. Dee).
Photo “Joe Biden and Kamala Harris” by The White House.