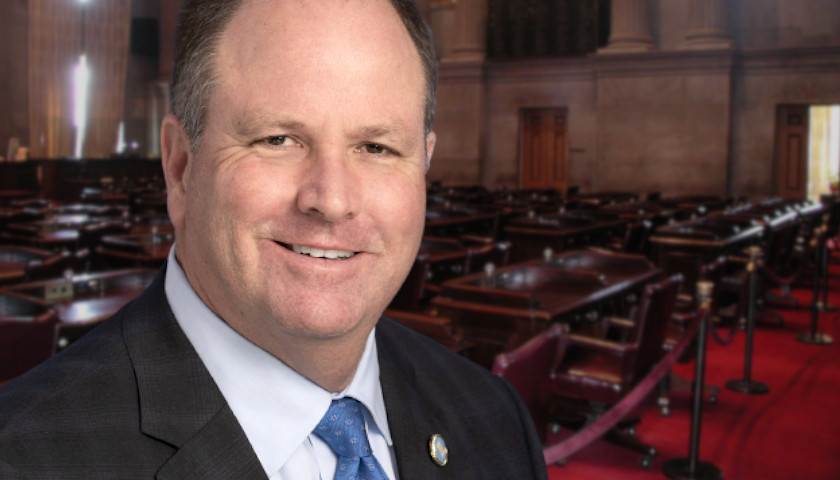 NASHVILLE, Tennessee – A meeting to hear opponents of a bill that preempts local governments from prohibiting energy infrastructure was held Monday morning by the House bill sponsor. Meanwhile, the Senate version of the bill advanced through the committee process.

State Rep. Kevin Vaughan (R-Collierville), sponsor of HB2246, announced that he scheduled the meeting during the March 8 meeting of the House Commerce Committee he chairs. During the same committee meeting, Vaughan bid adieu to the Interstate Compact bill he also sponsored, The Tennessee Star reported.

While Vaughan told the committee the Interstate Compact legislation was “bad policy,” he didn’t feel the same way about HB2246. Vaughan said the legislation need more conversation and rather than “clog up these rooms for quite a while in discussion,” he rolled the bill two weeks and scheduled a stakeholders meeting. The stakeholders meeting, set for 10 a.m. on a Monday in room 8C was objected to by Memphis-based Democrat State Rep. Joe Towns, because of the difficulty for legislators 200 to 300 miles away getting to Nashville without having to stay over Sunday evening.

There was no discussion about how putting the meeting in an eighth-floor conference room also meant that it did not appear on the Tennessee General Assembly (TGA) website tab for schedules and calendars. The location for the meeting also made it not visible to the public through the live or archived video features available on the TGA website. Following the meeting and upon questioning by The Star, Vaughan said the Monday meeting was more “sausage making,” and that whenever the bill is taken up in Committee, “it will still be a transparent process.”

The Monday meeting, at its peak and for most of its one-hour duration, was attended by nearly three dozen, including two of Vaughan’s House colleagues, State Rep. Dwayne Thompson (D-Memphis) and Kent Calfee (R-Kingston) both of whom sit on the 22-member Commerce Committee. 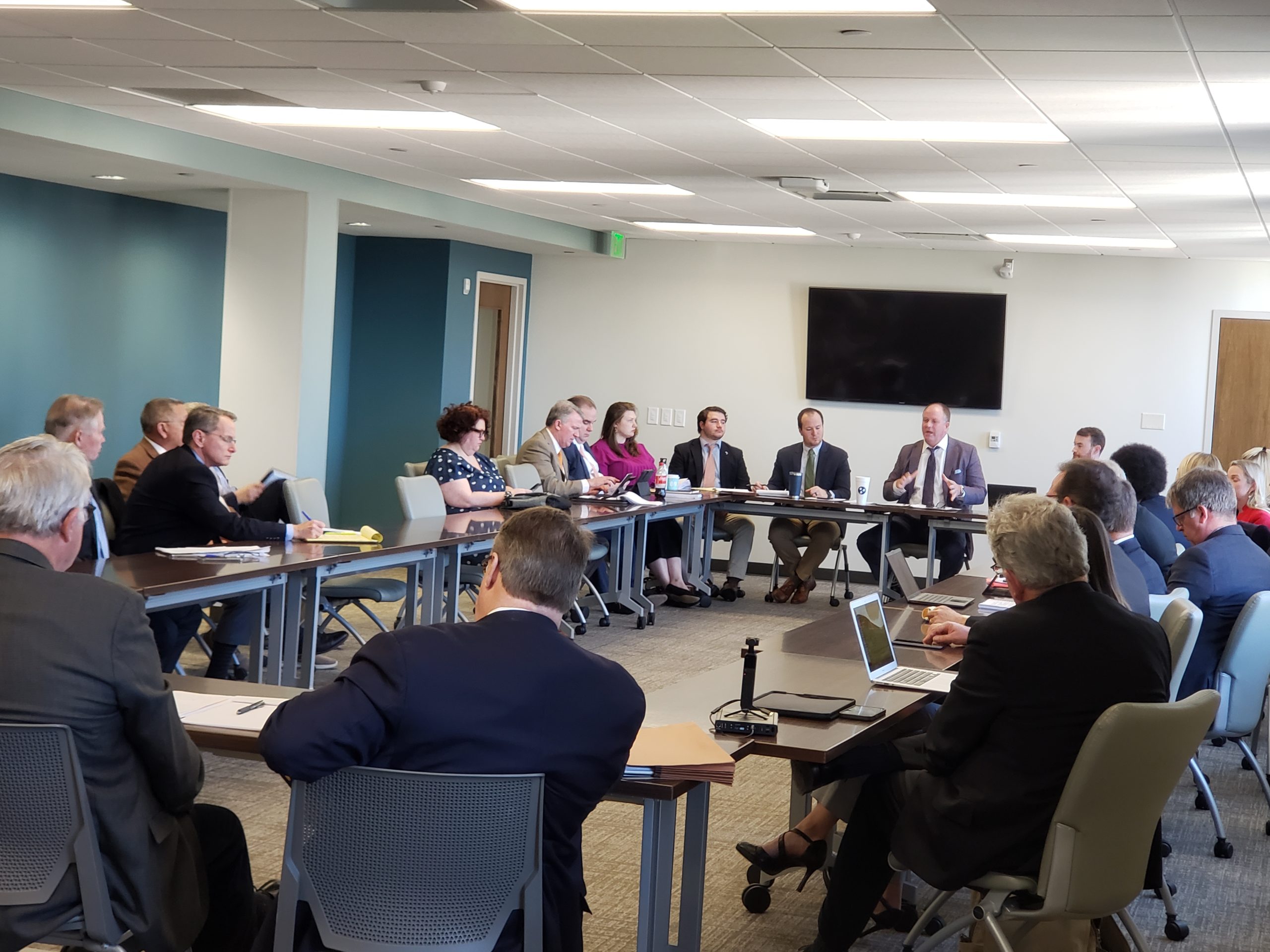 Vaughan opened the stakeholder meeting by saying that the purpose of the bill, which he later told The Star was brought to him by the Tennessee Chamber of Commerce and Industry, is not to overturn a decision regarding the Byhalia Pipeline, which he described by the proposed pipeline’s route rather than by name.

Vaughan said the situation did make him aware of the potential when one community makes a decision that affects other communities down the line. He made it clear the meeting was not to discuss beliefs regarding fossil fuels versus renewable energy.

As a licensed P.E. who lives within two miles of three superfund sites, Vaughan said it is his duty to look for public safety and welfare. He also summarized the feedback he has received on some of the controversial legislation he has carried, “It’s funny, two weeks ago, I was a Marxist and a socialist,” apparently alluding to his Interstate Compact bill that he took off notice, “and now I’m a genocidal shill for the oil companies. I’m somewhere in the middle.”

Also in attendance were a few members of the public belonging to local environmental groups including the Tennessee Chapter of Sierra Club; Allison Stillman of the Climate Reality Project founded by Al Gore; Sarah Houston, Executive Director of Protect Our Aquifer; Justin Pearson, president and co-founder of Memphis Community Against Pollution (MCAP); and George Nolan, Senior Attorney at the Southern Environmental Law Center (SELC).

All spoke against the proposed amendment that would make Vaughan’s bill HB2246. The groups were opponents of the Byhalia Pipeline, a project which the company announced in July 2021 it was no longer pursuing.

After about six opponents to the legislation spoke, mainly reading from prepared comments, Vaughan adjourned the hour-long meeting.

During his earlier presentation of the bill at the Business & Utilities Subcommittee meeting of March 2, when the amendment was adopted, Vaughan said the proposal was in response to critical infrastructure needs across the state.

He alluded to supply chain issues due to international events, shut downs, malware attacks and specifically mentioned the Colonial Pipeline. According to the Department of Energy Office of Cybersecurity, Energy Security, and Emergency Response, Colonial Pipeline Company shut down its pipeline system for 6 days in response to a ransomware attack.

Recognizing that preemption is not looked favorably upon these days, Vaughan said, “This bill would preempt localities from creating from creating zoning laws that prohibit the creation of critical infrastructure such as pipelines through their communities.”

The legislation allows pipelines and other types of energy-related fields to claim an exemption and not have to deal with a patchwork of regulations, as Vaughan referred to it, as they cross the state.

Adding that the situation is bigger than just a community and vital to the nation’s infrastructure, Vaughan said the words in the bill are particularly critical and read several paragraphs directly from the amendment.

When Senate sponsor Ken Yager (R-Kingston) presented the bill at the Commerce and Labor Committee this past Tuesday, he also emphasized that energy infrastructure that includes storage tanks, pipelines and transmission lines necessary to produce, generate and distribute natural gas and liquid petroleum is critical to Tennessee’s economic engine and meeting day-to-day demands of transportation and manufacturing.

Yager became more animated, using his hands as he addressed the committee to what his bill seeks to remedy.

“We’ve seen a trend in recent years, Mr. Chairman, from some groups taking aim at fossil fuels in general and sometimes that campaign against fossil fuel manifested itself in some local governments getting involved in what should otherwise be a statewide scope. We’ve seen that now happen in Tennessee, when we’ve actually had one of our political subdivisions try to use the power of ordinance to stop a pipeline, and this bill will address that general issue.”

Yager argued that a patchwork of local government regulations will affect the diversity of supply of energy infrastructure, impede Tennessee’s economy and make life harder for consumers.

He also said that one of the most important things is that, in one of the most heavily regulated industries, public health and safety measures are in place through the Clean Air Act, Clean Water Act, Pipeline Safety Act as well as other state and federal laws he saw used to good effect when he served for 24 years as Roane County Mayor.

What the bill doesn’t do, continued Yager, is prevent any local political subdivision from state authorized zoning of a ministerial nature pertaining to land use, if it is applicable to all commercial activities within the jurisdiction.

“We’re talking about land use – the zoning process here. It doesn’t do away with zoning, as some might say,” Yager emphasized toward those sitting in Hearing Room I observing the proceedings.

Yager said this is a very needed bill that he is happy to sponsor.

Chairman Paul Bailey (R-Cookeville), after taking a voice vote to add Yager’s amendment to make the bill, went out of session to take testimony.

Pearson of MCAP made similar points as he did at Vaughan’s stakeholder meeting Monday that there is agreement that energy is needed and wanted, but the legislation would strip duly-elected local governments of their power to protect their communities and to ensure that companies who seek to do business, build pipelines and other infrastructure do it in partnership with the people who live in those communities.

Appealing on the point of shared values “growing up southern,” regardless of race or class, Pearson said the right to local control, the God-given right to self-determination and the right to protection of property are put at risk through the proposed legislation.

Nolan of SELC, likewise, made similar points as he did Monday, the main one being that the legislation will remove a local government’s ability to win important concessions from pipeline and storage tank developers.

Lobbyists Emily LeRoy of the Tennessee Fuel & Convenience Store Association and Mallorie Kirby of the Tennessee Chamber of Commerce & Industry, who had apparently been invited by Yager, both spoke in favor of the legislation.

Noticeably absent from the lobbyists providing testimony in the Senate committee, as well as Vaughan’s stakeholder meeting, were the various groups that represent local governments, such as the Association of County Mayors, Tennessee County Commissioners Association and the Tennessee Municipal League.

State Senator Raumash Akbari (D-Memphis), whose district the Byhalia Pipeline would have run though said she had never seen the community come together as they did over that proposed project. She questioned if it would be state legislators who the community would talk to if Yager’s proposal became law.

“I know that whatever process a pipeline wants to go through to be able to be in a community, they can do that through a local government. This doesn’t do anything but take away that voice of a local government and the people,” stated Akbari.

She also said there seemed to be a contest on the number of emails she received on this bill – from across the spectrum, regardless of party – and TISA (Tennessee Investment in Student Achievement), Governor Bill Lee’s proposed K-12 education funding formula to replace the current BEP (Basic Education Program) model. 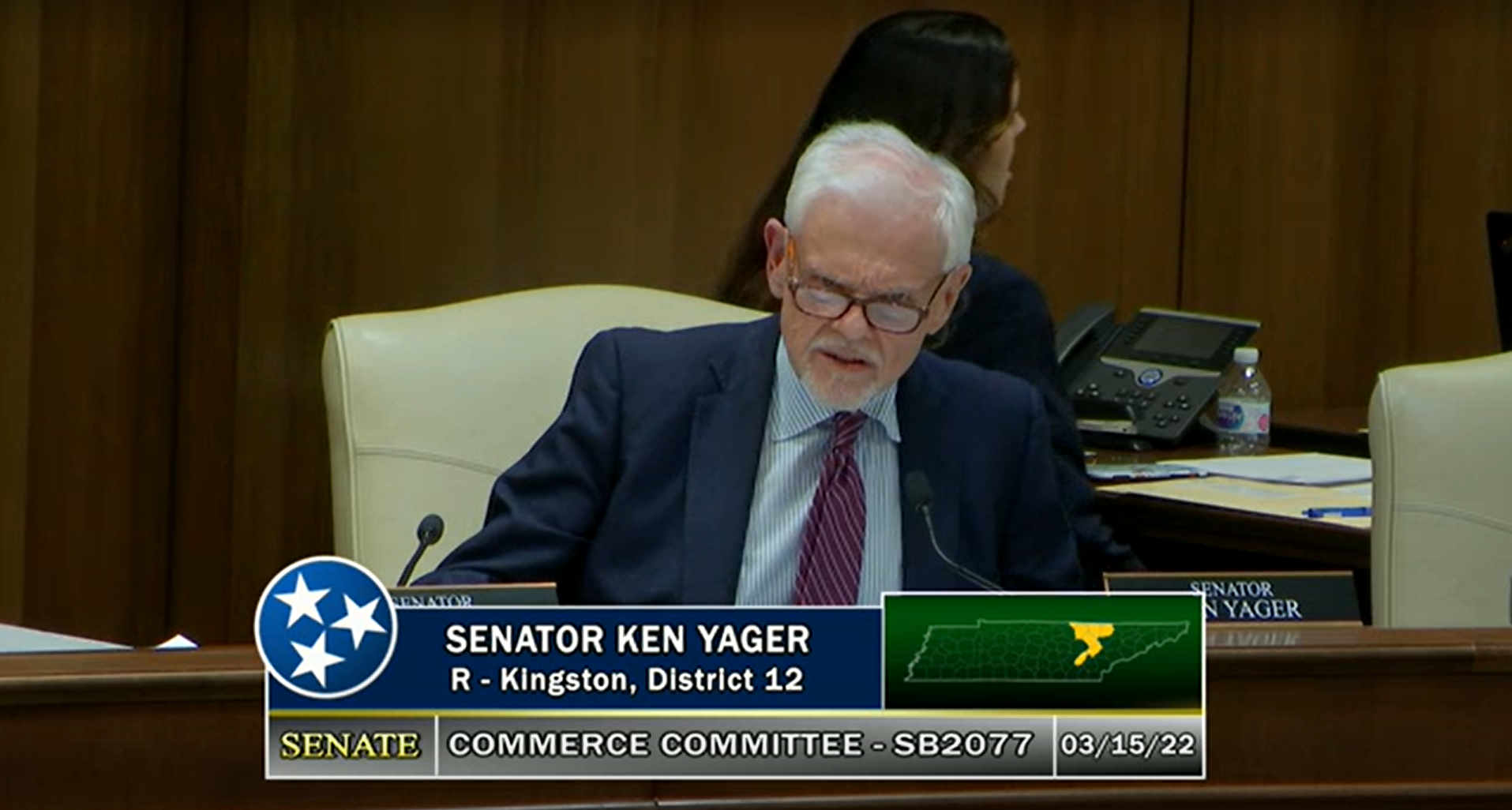 In closing on his bill, Yager appreciated the comments on community involvement and, like Bailey, had high praise for Akbari, but said incredulously, “One of the catalysts on this issue was outrageous actions that took place by the city council of Memphis. They used the prerogative of right of ways to basically prevent the siting and development of any future convenience stores that had gasoline pumps. Ironically, which did away for jobs for people and additional sales tax revenue streams to a community that needs it.”

Bailey interrupted Yager to advise him that the question had been called on the amended bill, ending all further discussion. Upon roll call vote, SB2077 passed with a vote of 8 ayes and 1 Nay along party lines. Voting in favor of the bill in addition to Bailey and Yager were State Senators Jack Johnson (R-Franklin), Frank Niceley (R-Strawberry Plains), Shane Reeves (R- ), Steve Southerland (R- ), Art Swann (R- ) and Bo Watson (R-Hixson). Voting against the measure was Akbari.

SB2077 goes to the Senate Calendar Committee to be scheduled for a floor vote.

Laura Baigert is a senior reporter at The Star News Network, where she covers stories for The Tennessee Star and The Georgia Star News.
Background Photo “Tennessee House Floor” by Ichabod. CC BY-SA 3.0.