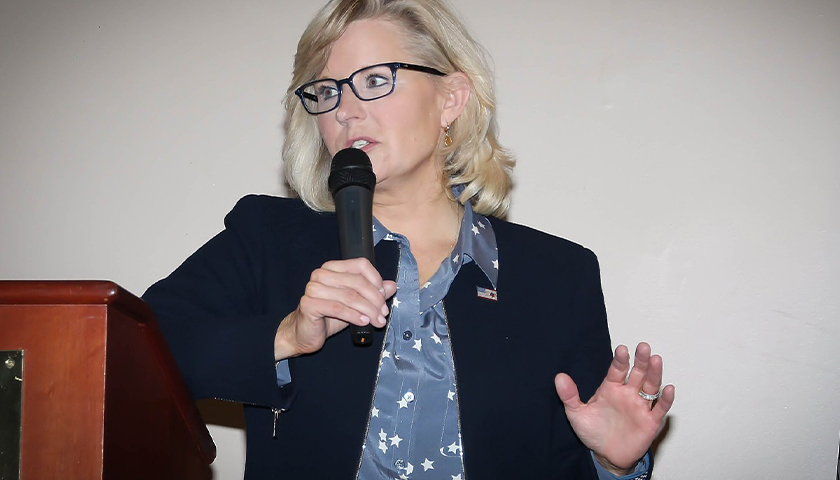 by Jeffrey A. Randall

No one ever said that the business of politics made good sense, but if you’re a politician, and the vast majority of your constituents — including a high percentage of those in your own party — no longer want you to represent them, shouldn’t you take their distaste as a hint and get the heck out of office?

Such is the case for notorious Donald Trump bashing RINO congresswoman Liz Cheney. As everyone knows by now, Cheney is the lone House representative from the huge but sparsely populated state of Wyoming, which means hers is the sole voice of every single Cowboy State resident and citizen in the lower chamber. Liz has never had an issue with winning elections in blood red Wyoming, which would seem to be an argument in her favor. But times and circumstances have changed markedly in the rocky mountain high plains and there’re hardly any folks there who hanker to send Cheney back to DC for another two years.

Yet onward Liz trudges. Because Cheney has fallen so far out of favor with conservatives and Republicans in her jurisdiction, she’s now relying on Democrats to try and (literally) save her seat. The optics alone are odd, but reality is even weirder. In a piece titled “Liz Cheney turns to Democrats to save her hide,” Tara Palmeri wrote at Politico:

“While Cheney has yet to overtly court Democrats, her decision to aggressively investigate Trump as a leader of the select Jan. 6 House committee naturally appeals to voters who detest the former president.

“Cheney allies are hopeful that crossover voters will bail her out this time. They are counting on a primary with at least two pro-Trump GOP candidates that will divide the anti-Cheney vote. With the help of even half of the 73,000 Democrats who voted for Biden in 2020, they believe Cheney could pull it off.

“That theory isn’t lost on House Minority Leader Kevin McCarthy, who has told members that he’s worried that the numbers add up for Cheney and that she might be back in Congress next session, according to a source with direct knowledge of the discussions. McCarthy did not respond to a request for comment.”

Who could blame McCarthy for not wanting to publicly address what has to be the most fascinating and most uncomfortable (for him and the GOP bluebloods, at least) primary in the nation? Every cycle has its share of attention-grabbing intra-party contests, but the fight over Cheney — a former vice president’s daughter — this time around takes first prize for intrigue.

Cheney doesn’t even try and hide her fondness for the roundly despised Washington establishment. In the age of Trump, where it’s advantageous to present oneself as an outsider, Liz grasps her card-carrying ruling class membership with all ten fingers. She’s the first one that CNN or MSNBC calls for a derogatory quote about Donald Trump. She never visits her constituents. She’s been officially disowned by her state GOP operation. She’s friendless in a vast ocean of political storms. She’s pathetic!

We spend lots of time here talking about the constant struggle between the conservative grassroots and the stodgy status quo loving GOP establishment, but Cheney’s race is ground zero for the concept in 2022. As Palmeri’s story pointed out, it’s not necessarily because of Liz’s voting record. She sided with Trump 93 percent of the time when he was president and served as a somewhat respected member of the House Republican leadership until she was forcibly removed from the post.

Voting records can deceive, and let’s face it, most of the votes House members take are rubber stamps for the leadership’s position. What separates one from the rest is your willingness to champion the little causes that get people animated.

With Liz Cheney it’s more about what you say than what you do. Though there’s plenty of angst regarding her actions since the 2020 election. The fake outrage that she exhibited over the events of January 6 was simply stomach turning, then she led the outcast band of ten GOPers in joining with phony Nancy Pelosi and every single Democrat to vote to impeach the outgoing president, even after he’d left office.

As for Cheney herself, she wasn’t even smart enough to realize she was being used by Nancy Pelosi when the matter of establishing a “commission” to study that day’s happenings was formed. Liz had been banned from conservative movement events so, instead of working to reconcile with the folks she’d called friends her entire life, she ran like a cowardly dog with its tail between its legs over to the enemy.

Liberals crowed over Cheney’s “courage”, “bravery” and “bipartisan spirit”. They’re suckers just like all the rest of Trump’s haters. It was more than obvious that Dick Cheney’s little girl was settling old scores with the new leader of the Republican Party because the upstart ran against her dad’s and George W. Bush’s aggressive, disastrous and country-bankrupting military ventures and bellicose foreign policy as well as their wishy-washy capitulation to Democrats on big government programs and fiscal insanity.

George W. Bush’s “compassionate conservatism” was a joke. Bush and Cheney weren’t full spectrum conservatives and they set the movement back at least a decade because big government conservatism became synonymous with the Republican Party on their watch. The few who dared stand up against it — like Ron Paul — were deemed kooks and outside the mainstream.

Trump called the Bush administration a disaster. Was he wrong? Conservatives got tax cuts, but what else did George W. and Dick Cheney accomplish other than to destroy the GOP brand and directly lead to two presidential candidates — John McCain and Mitt Romney — who couldn’t win a national election against a very beatable community-organizer-turned-Democrat-president-nominee?

We’re still fighting the fight. As the recent vote on the disgraceful omnibus budget bill demonstrated, there are an awful lot of Republican RINOs to kick to the side.

Palmeri’s article contained quotes from a couple self-identified Wyoming Democrats who plan to re-register as Republicans on primary day in order to vote for Cheney. The fact that such people exist is argument enough to change the party nominating system in Wyoming — and/or any state — where people who actively work to defeat Republicans are permitted to work the absurd rules to get what they want.

Anyone who thinks this is a good idea should answer a simple question: Would you want your congressman or woman determined by LeBron James, Joy Behar, Chris Cuomo or Rachel Maddow? Do you think these liberals would select politicians who represent you? By the same token, if you were voting in the Democrat primary, wouldn’t you intentionally opt for the most “out there” person who’d be certain to fail?

Why should the will of nearly all of Wyoming’s Republicans be undermined by the nemesis? Perhaps it once made sense to allow Democrats to switch “horses” in the primary to have a voice in who will be representing them for the general election, since Wyoming is essentially a one-party state. But if this is the scenario, the individuals in question can always change their party registration weeks or months before an election instead of a spur-of-the-moment decision in a close contest.

If Liz Cheney doesn’t become the poster child for why a system fix is necessary, then I’m not sure what it would take to convince the doubters. Parties exist for a reason. If you believe in the party platform, it’s reasonable to assume that your fellow party members hold similar views to yourself, and the candidate or candidates they select will uphold those principles. You don’t vote for someone hoping they’ll lose, do you?

Donald Trump brought badly needed attention to the need for change at the top of the Republican Party. For far too long the party’s candidates at virtually every level were decided by the leadership hierarchy, not the people themselves. The leaders introduced candidates who would perpetuate the core of power, not “rock the boat” so to speak. That’s how we got a federal government that’s so dysfunctional that its budget is basically renewed year after year without significant alteration.
It’s because there are people like Liz Cheney in Congress.

The establishment media wants Americans to think that Donald Trump is the issue here. Make no mistake, Cheney hates Trump. But this controversy surrounding Liz and the voters of Wyoming is reflective of the greater struggle taking place all over the country at the local and national levels.

Whereas leftists have a party that’s truly dedicated to their causes and concerns, conservatives do not. Both the Democrats and Republicans are essentially big government parties. They just want different things. Donald Trump ran in 2016 on the premise of converting the GOP into a party controlled by the grassroots, with him as their leader.

Cheney and the elites didn’t like it. And as shown by what’s occurring in Wyoming today, some sleazy politicians are willing to do anything — including going to their opponents — to upset the will of the people back home to hold onto power.
Some suggest that Liz Cheney wants to run for president against Trump in 2024, and she needs to hold onto her congressional seat in order to do so. For that reason alone, she’s trampled on her own voters to settle a personal score and to try and redeem her father’s name. We can only hope and pray she doesn’t succeed.

Reprinted with permission by ConservativeHQ.org