DeSantis Holds Roundtable with Doctors Who Say Pandemic Is Over 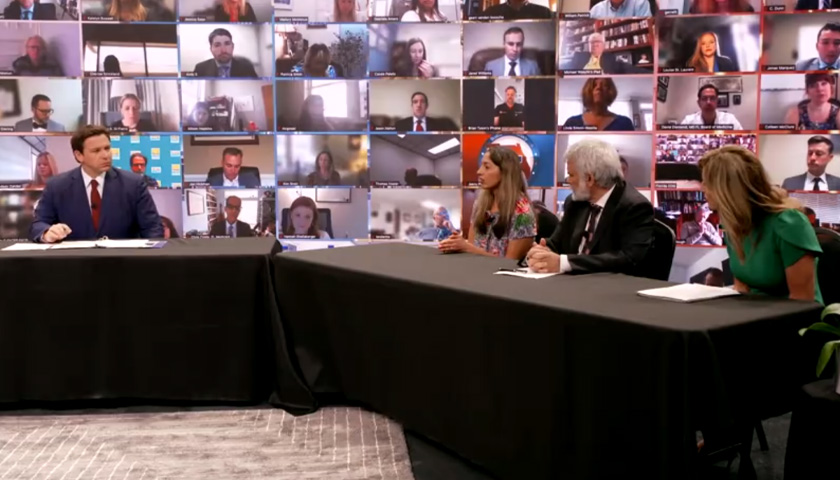 Led by Governor Ron DeSantis (R), a roundtable of doctors, scientists and academics gathered in-person and virtually Monday to discuss the COVID-19 pandemic, and specifically the ramifications that lockdowns and other measures have had on American society.

DeSantis said his goal was to end what he calls “COVID-19 theater,” and get back to life as normal.

The roundtable was opened by Florida’s Surgeon General Joseph Ladapo, who has often maligned by the press.

In that spirit, the roundtable included such standout figures as Dr. Robert Malone, the inventor of the mRNA technology in the COVID-19 vaccines, and a strong anti-vaccine-mandate advocate. He, too, has been maligned by the press, and even banned from social media platforms for sharing his views.

“I don’t whine about what the press has subjected me to, or my colleagues,” Malone said.

Malone noted that one of the largest mistakes during the pandemic, in his opinion, was the restrictions placed on physicians to prescribe early treatments for COVID-19 to positive patients.

Several of the other doctors on the panel noted the same.

Other spoke about the effects of lockdowns.

“The lockdowns that we adopted to address the disease ignored a basic fact about [COVID-19] – that there is a thousand-fold difference in the risk of severe outcomes from infection, with the youngest being relatively protected, thank God – compared to the old,” said Dr. Jay Bhattacharya, a professor of health policy. “At the same time the harms of lockdowns are absolutely devastating – catastrophically devastating to poor, the working class – around the world.”

Lockdowns cost millions of Americans jobs, and forced millions of businesses nationwide to shut their doors, many permanently. Bhattacharya also noted that the lockdowns particularly hurt poor children, who could not attend classes while many rich families sent their children to private schools that never closed.

“Science is all about adjusting your hypothesis when confronted with new evidence. Science is a process for better understanding the world – it’s not a religious dogma or political slogan. But for the past two years, sadly, we have seen increasingly harsh censorship of dissenting voices. Doctors who have raised valid concerns about lockdowns, masks, and vaccine mandates have been silenced and deplatformed,” she said.

“But now, the data is showing they were right all along. That’s why the governor wanted to do this roundtable, because it’s so important that people understand the magnitude of the harmful policies that were made by following a scientific “consensus” achieved by bullying and silencing anyone who questioned it,” she continued. “We cannot allow this horrific pandemic response to happen again, and in order to prevent that, we need to make very clear that the lockdowners were wrong.”

Governor DeSantis hosts a roundtable with physicians nationwide on ending COVID theater once and for all. https://t.co/dYRGpMEVS7

Pete D’Abrosca is a reporter at The Florida Capital Star and The Star News Network. Email tips to [email protected].Photo “Ron Desantis Roundtable with Physicians” by Ron DeSantis.