Commentary: Trump Was Right Again About the U.S. Subsidizing Europeans’ Healthcare and Defense 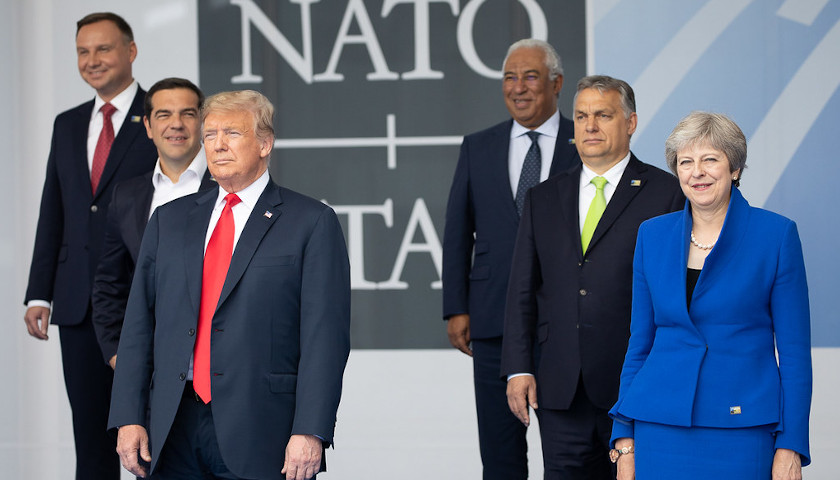 It took Russia’s naked aggression against Ukraine for Germany to admit that Donald Trump was right all along: Europe needs to stop relying on U.S. subsidies and spend more on its own defense.

In a stunning policy reversal, Chancellor Olaf Scholz announced that Germany would do what Trump was long urging and commit at least two percent of GDP to defense spending.

That the United States has been subsidizing Europe’s defense is well known, thanks mainly to Trump’s harping on it. Another thing Trump thundered about, correctly, is that the United States also subsidizes Europe’s socialized healthcare. Pharmaceutical companies rely upon sky-high U.S. drug prices to render economically viable their ability to sell drugs in other countries. The United States thereby subsidizes socialized healthcare in the rest of the world, especially in the wealthiest European countries.

Here’s how and why—and why Joe Biden’s State of the Union pledge to lower drug prices is dead on arrival.

Drug development is expensive. To defray costs and turn a profit, most pharma companies rely upon the holy trinity of drug approval: The United States, Western Europe, and Japan—usually in that order, for compelling economic reasons.

Why that order? The United States is nearly always first because the highest prices can be obtained there. Through their “market access” functions, pharma companies negotiate prices with the “payers”: large healthcare organizations, hospital systems and insurers. These discussions often involve byzantine structures of rebates and third parties known as pharmacy benefit managers (PBMs). But the main goal is always the same: to convince the payers to accept the highest price possible for U.S. sales.

The Trump Administration briefly tried to enact “most-favored nation” status for the United States, under which American prices could be no higher than the lowest approved prices elsewhere. That proposal went nowhere fast. The same will happen with Biden’s State of the Union pledge to “let Medicare negotiate lower prices for prescription drugs.” Pharma companies donate a lot to politicians of both parties. Therefore, neither “most-favored nation” nor negotiated Medicare prices will happen.

The pharma companies have no interest in changing the status quo, as their business models explicitly depend on high U.S. prices. Without being propped up by American consumers and taxpayers, the economic viability of selling drugs in Europe and beyond nosedives. The European health authorities, on behalf of their largely single-payer systems, know they have the upper hand with the drug companies, as everyone acknowledges that high U.S. prices are intended to subsidize lower prices in Europe. This, of course, props up their socialized medicine schemes by limiting costs.

Japan, also a single-payer system, typically relies upon two European countries’ “reference pricing” in setting the Japan price. This is why Japan is typically the last part of the holy trinity to kick in—the Pentecost of the drug approval process.

After the Europeans and Japanese set their prices, steeply discounted from the U.S. price, the pharma companies then may seek approval in other countries. Such approvals depend upon even more draconian pricing, as these countries typically use the “most favored nation” provision as an absolute ceiling. Some advanced countries’ pricing is so restrictive—Canada and South Korea, for example—that pharma companies often do not aggressively pursue drug approvals there.

All the parties involved—the pharma companies, the health insurers, the PBMs, the U.S. government, foreign governments—know that the system ensures that the United States will always have the highest prices, and that reliance on this American subsidy is how drugs are made available to the rest of the world. To synergistically paraphrase both Solzhenitsyn and Bob Dole: We know it, they know it, we know they know it, and they know we know they know it.

Pharma companies and their lobbyists in the United States will often cite the need to fund research and development of innovative new products as a reason and a justification for high prices, while also noting that the limited period of patent protection ensures a never-ending supply of off-patent generics at bargain prices. Tinkering with the system threatens to slow down or even stop this virtuous cycle of innovation.

No person or entity has been more aggressive in advancing this pharma shibboleth than the industry’s principal trade association, the Pharmaceutical Research and Manufacturers of America (PhRMA). In a section on its website titled “Why Washington Shouldn’t Copy The Flawed Pricing Policies of Other Countries”—nothing subtle there!—PhRMA rails against government attempts to set U.S. prices as well as those who believe such price controls would not harm patients and innovation. “Reality,” PhRMA informs us, “tells a far different story.”

PhRMA notes that the United States far outpaces Europe in research and development spending, a sharp reversal from previous decades. Moreover, PhRMA continues, Americans enjoy quicker and broader access to new medicines, leading to better health outcomes; for example, “the five-year survival rate for all cancers is 42% higher for men and 15% higher for women in the United States than in Europe.”

In short, says PhRMA: “The United States currently leads the world in access to new medicine because it was designed to be that way.” (Emphasis added.) In other words: The system works. Don’t screw it up!

All well and good—and largely true and perhaps even, yes, virtuous. But here is what remains unspoken: just as with defense spending, the United States, through its high drug prices, subsidizes and thus props up socialized healthcare systems in other countries—often very wealthy ones such as Germany, France, and Japan.

Don’t hold your breath waiting for an invasion by Russia or a State of the Union pledge to prompt the beneficiaries of this well-oiled machine to impart this nugget of truth; although if you do so and pass out as a result, there are drugs for that.

Mr. Soriano, a graduate of Princeton University and Harvard Law School, started his professional life at New York’s Simpson Thacher & Bartlett before working in law and compliance in Corporate America, most recently as Chief Compliance Officer at Celgene Corporation and Insmed Incorporated, both pharmaceutical companies. Follow him on Twitter and GETTR @sorianojohnd.