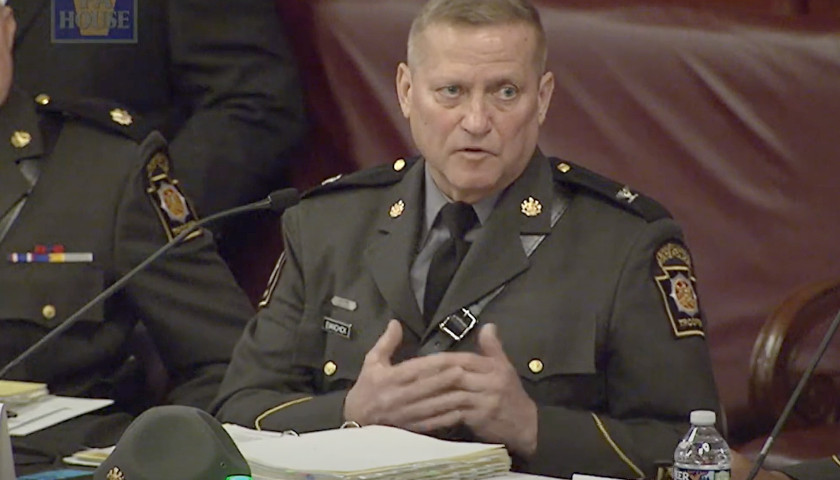 The Pennsylvania State Police (PSP) received $629,342,000 this fiscal year. In a budget proposal unveiled last month, Governor Tom Wolf (D) asked the Republican-run General Assembly to fund the agency at $925,599,000 (in combined state and federal dollars). The governor, however, anticipates that PSP funding can be kept flat over the four fiscal years after next year.

PSP Commissioner Robert Evanchick told the committee that personnel costs — i.e. salaries and benefits negotiated through collective bargaining — are the principal driver of the agency’s expenses. Other major components of the state police budget include the statewide public safety radio system and training programs.

PSP vehicles are equipped with video recorders but state troopers currently do not wear body cameras. Evanchick told legislators that his department has long hoped to supply officers with the devices and has published a request for bids from camera vendors.

“We’ve been looking to move in that direction for the last several years,” he said.

One major PSP expenditure that received some scrutiny at the hearing was the governor’s allocation of over $5.5 million in payouts to members of the PSP force that have received full COVID-19 vaccination. About $2.2 million of that amount comes from Pennsylvania’s General Fund and the other $3.3 million comes from the Motor License Fund, which derives revenue from liquid-fuel taxes as well as vehicle registration and license fees and certain fines.

The governor has also provided six additional paid-leave days to vaccinated officers. A total of 3,592 state police personnel—roughly 63 percent of agency employees—availed themselves of the payout and leave incentives.

After State Representative Jonathan Fritz (R-Honesdale) inquired as to whether the current 4,740 individuals who currently work for the department is a sufficient number, Evanchick noted that the department began an internal analysis of its staffing needs last autumn. He said one increasing source of strain on state troopers has been an increase in cybercrimes.

The commissioner commented that “we need to build those [staffing] numbers up” to bolster both patrol and investigative duties. He said that while the number of PSP personnel is statutorily capped, state police are likely to request lifting that cap in the near future.

“Any time a local municipality gives up their local law enforcement, we have to cover that municipality,” Evanchick said.

Wolf wants lawmakers to approve an overall FY 2022-23 state budget of $43.7 billion which is 16.6 percent greater than the current fiscal year’s spending. House Appropriations Committee Chairman Stan Saylor (R-Red Lion) has declared the overall budget figure “dead on arrival,” especially insofar as the governor’s own revenue projections are much more optimistic than those determined by the Independent Fiscal Office.