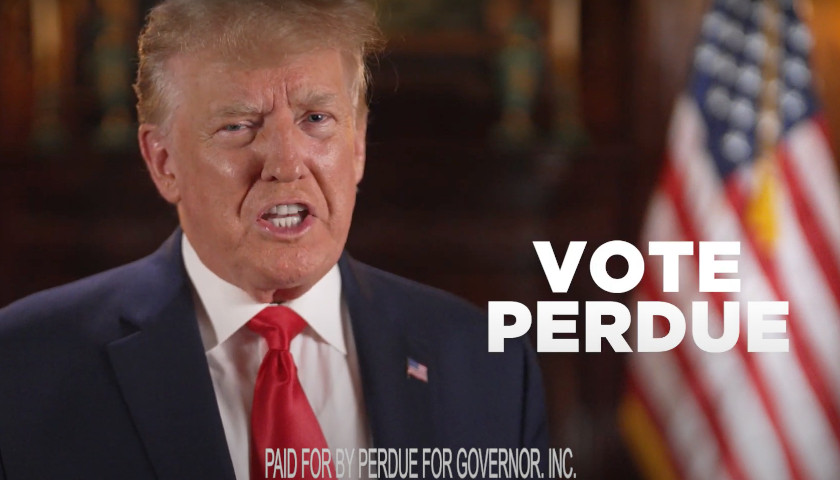 According to a statement, Perdue’s advertisement will run across the state with a $600,000 buy.

In the ad, Trump said incumbent Governor Brian Kemp “let us down.”

“David Perdue is an outstanding man. He’s tough. He’s smart. He has my complete and total endorsement.”

Perdue on Tuesday called for term limits for all statewide elected officials.

Perdue proposed a total of two four-year terms for all statewide elected officials, including the governor.

Perdue said in the statement that “career politicians caused the dysfunction we see today, and they won’t be the ones to fix it.” He then referred to Kemp as a “20-year career politician” who focuses more on advancing his own self-interests than helping the people he was elected to serve.

The Georgia State Senate has already passed a bill calling for a constitutional convention to propose term limits at the federal level.

Perdue launched a statewide tour this month to communicate his priorities to voters, and they include reforming the state’s election system and overhauling the way the state government collects taxes.

Perdue launched his tour in Alpharetta. He said, right now, the Republican Party is divided. Perdue mentioned that Trump does not dispense endorsements lightly.

Perdue said this month that nine states — not including Georgia — do not have a state income tax. He said he’s working with two renowned national economists, neither of whom he identified, to devise ways for Georgia to abolish its state income tax.

Perdue also repeated his intent to create an Election Law Enforcement Division that would investigate alleged violations of the state’s election laws.

Members of the Georgia General Assembly in 2020 pushed Kemp to call a special legislative session before the U.S. Senate runoff elections in January of last year.

The special session did not happen. Had such a special session occurred then state legislators would likely have addressed the appointed presidential electors and the implementation of laws limiting voter fraud in the general election runoff.

Kemp, in December 2020, would not use his authority to change the date of the state’s two U.S. Senate elections from January 5 to February 1 of last year. Moving back the date might have given members of the Georgia General Assembly additional time to coordinate and develop ways to prevent potential election fraud.

Chris Butler is an investigative journalist at The Tennessee Star and The Georgia Star News. Follow Chris on Facebook, Twitter, Parler, and GETTR. Email tips to [email protected]
Photo “Donald Trump in Ad” by David Perdue.