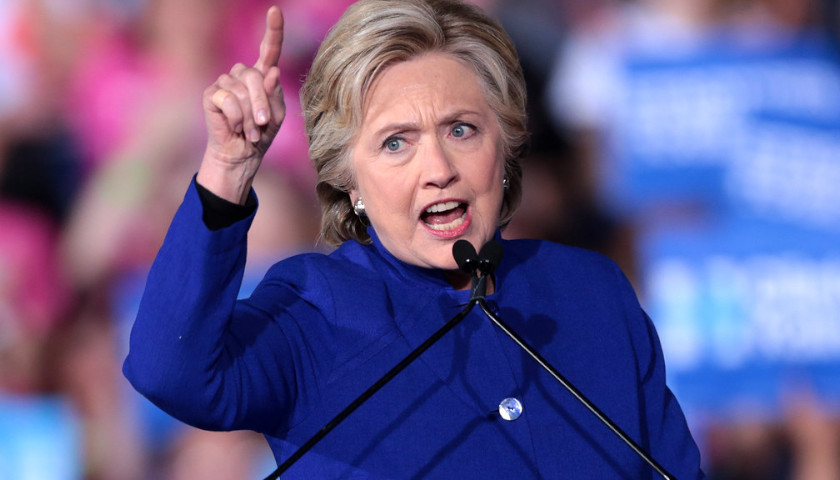 Hillary Clinton’s never-ending shenanigans in 2015-2016 could be summarized as an attempted slow-motion coup.

Four years of national hysteria, a divided nation, and dangerous new tensions with Russia were some of the wages of Clinton’s machinations.

Clinton hired a British national and ex-spy, Christopher Steele, to compile dirt on her election opponent, Trump. She hid her likely illegal campaign payments to him through at least three paywalls—the Democratic National Committee, the Perkins Coie law firm, and the opposition research firm Fusion GPS.

Partisans in the FBI helped her, by variously spying on minor officials affiliated with the Trump campaign, like George Papadopoulos and Carter Page. To expedite its improper surveillance, a corrupt FBI hierarchy presented fraudulent documents to a FISA court that authorized the illicit surveillance.

Clinton’s orbit of former subordinates and friends seeded the lies in the dossier throughout the Department of Justice, the FBI, and the CIA.

During the Trump transition, the FBI also tapped into the communications of national security advisor designate General Michael Flynn. The illegally leaked surveillance put an end to his service to the Trump Administration and ruined his life.

The country went through 22 months and $40 million in legal expenses under special counsel Robert Mueller to investigate the Clinton-inspired Russian collusion hoax.

When it was all over, Mueller’s “dream team” found no such actionable Trump-Russian collusion.

Mueller himself ended up nearly humiliated, preposterously claiming under oath no knowledge about the Steele dossier or Fusion GPS—the twin pillars of deceit that prompted his own investigation.

But Clinton was undaunted.

According to a recent affidavit filed by Special Counsel John Durham, Clinton furthermore had previously hired members of the Perkins Coie law firm to contract with tech experts to leverage their own existing access to the White House and Trump servers—and tap into the top-secret communications data of candidate and then President Trump.

Their apparent desperate purpose was to find any dirt that the failed Steele dossier had not discovered.

As a result, Clinton’s tech hirelings helped promulgate another “collusion” lie that Trump Tower computers were communicating back and forth with the Russian Alfa Bank.

Nightly news still trafficked in the fake Steele dossier and the Russian collusion hoax. The additional phony Alfa Bank smear was cited as further proof that Trump should be removed from office.

Clinton’s efforts created the general background landscape of hysteria and untruth that greenlighted the first Trump impeachment over a phone call to the Ukrainian president.

“Collusion” helped prompt efforts to remove or discredit him through possible invocation of the 25th Amendment.

Nonetheless, Trump completed a solid record of accomplishment of border security, energy production, full employment without inflation, deregulation, and a deterrent, but not interventionist, foreign policy.

The chief criticism of his administration was that Trump believed the Washington establishment and media were out to get him. In furor, he railed nonstop that the Left had conspired to monitor his communications and break the law to ruin him.

Yet that supposed paranoia is proving to be an unpleasant reality.

What would Trump’s presidency have been like had opponents like Clinton kept to normal adversarial politics? What if they had avoided spinning conspiracies, often through violation of federal laws? Could they have been content with just opposing him rather than seeking to destroy him?

One of the reasons why American-Russian relations are poor, aside from Vladimir Putin’s aggressive efforts to reclaim the borders of the old Soviet Union, was the nonstop and politicized demonization of “Russia.”

Americans were repeatedly and falsely told that “the Russians” had tried to destroy the Clinton campaign to partner with the traitor Trump and betray the United States. That was a slanderous lie

Will the nation ever demand an investigation to find out how and to what extent Hillary Clinton’s subordinates and contractors infiltrated the private communications of the president of the United States?

Will the people ever learn how such false information was seeded throughout the government and media in a conspiratorial effort to destroy a sitting president?

But the ongoing effort of her paid associates to tap into the top-secret communications of a presidential candidate and further use such illicit information to ruin the American presidency will go down as her greatest masterpiece of deceit.

Victor Davis Hanson is a distinguished fellow of the Center for American Greatness and the Martin and Illie Anderson Senior Fellow at Stanford University’s Hoover Institution. He is an American military historian, columnist, a former classics professor, and scholar of ancient warfare. He has been a visiting professor at Hillsdale College since 2004. Hanson was awarded the National Humanities Medal in 2007 by President George W. Bush. Hanson is also a farmer (growing raisin grapes on a family farm in Selma, California) and a critic of social trends related to farming and agrarianism. He is the author most recently of The Second World Wars: How the First Global Conflict Was Fought and Won, The Case for Trump and the newly released The Dying Citizen.
Photo “Hillary Clinton” by Gage Skidmore. CC BY-SA 2.0.