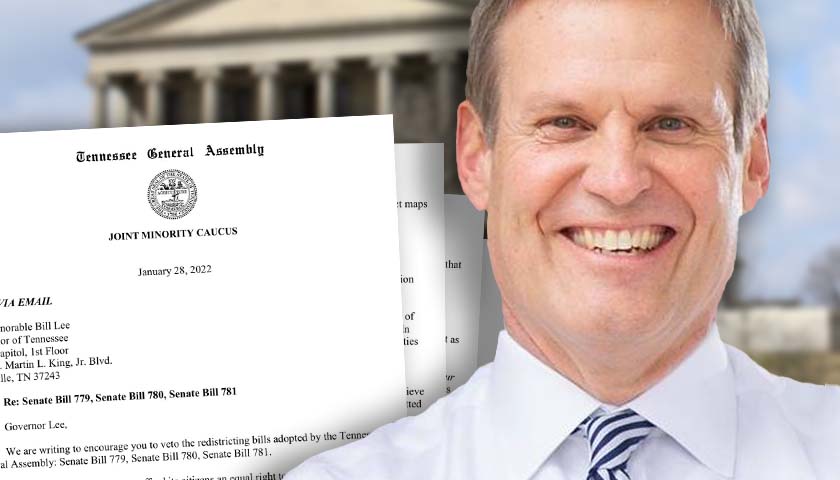 Multiple Democratic lawmakers in the Tennessee Legislature sent a letter on Friday to Governor Bill Lee, asking him to veto proposed changes to state and federal district lines.

Notably, some state lawmakers, both Democratic and Republican, are drawn together in the state-level maps, which could lead to intense primary elections.

However, Democrats have fumed over the proposed change to divide parts of Nashville into three different congressional districts, potentially allowing an additional Republican to gain a seat in the U.S. Congress. The new maps seemingly influenced Representative Jim Cooper (D-TN-05) to retire from his position at the end of his term.

“The redistricting plans on your desk aim to distort the will of voters and result in the selection of officials who are less representative of all Tennesseans by design. All three bills contain serious defects that either directly violate the letter of the law within the Tennessee Constitution or alternatively subvert the principles that provide a foundation for a fair, accessible and equal democracy,” the group wrote in their letter to Lee.

We sent a letter to Gov. Bill Lee urging him to veto the rigged redistricting bills headed to his desk.

These GOP-drawn maps subvert our democracy and diminish the voting power of black and brown Tennesseans.

Furthermore, they allege the new boundaries are motivated by race, saying the “GOP-drawn maps subvert our democracy and diminish the voting power of black and brown Tennesseans.”

“Governor, it gives us no pleasure to be writing you to request a veto on this legislation that will shape the legislature for the next decade, But, today, a veto of this unfair and unequal redistricting legislation is the best and most appropriate course of action to protect our democracy and do right by all our citizens,” they added.

If Lee signs the bills into law, the Tennessee Democratic Party has repeatedly pledged to sue.