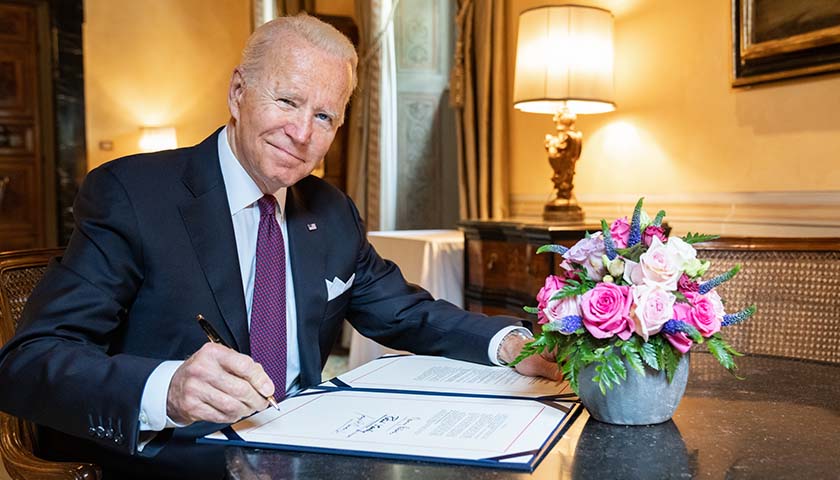 The emphasis, I hasten to add, is on the adverb. Perhaps, if he didn’t make me feel thoroughly sorry for the United States of America, my sympathy for him would be unalloyed. But even many in Biden’s own party are aghast at his performance as president.

It’s almost a matter of smell, of that sixth sense that alerts sensitive souls to impending disaster. Animals somehow know when an earthquake is coming, even before the ground begins to tremble. The far-left activist Stacey Abrams is well endowed with those antennae, which is why she invented “scheduling issues” and gave the president’s speech in Atlanta a miss last week. The aroma of events like that have a way of clinging to someone, and Abrams had the good sense to know that Joe Biden on “voting rights” and the run-up to Martin Luther King Day was likely to be a redolent affair.

In the event, it was much worse than she, or anyone else for that matter, could have foreseen. Powerline’s Paul Mirengoff called it the “the worst presidential speech in modern history.” But Paul is a generous man. There was really no need for that qualifying “modern.” Paul mentions Jimmy Carter’s disastrous “malaise speech” of 1979 as a contender for the palm. That speech was indeed horrible. It was one of the things that lost Carter the election the next year. But Biden’s speech was far worse. Carter’s speech was a bizarre combination of cramped, hectoring moralism, much of it lifted from Christopher Lasch, and a repellent, cardigan-clad sentimentality and faux folksiness.

Carter’s speech, however, was not mendacious. It was simply wrong. Biden’s, on the contrary, was a veritable tissue of incontinent hyperbole, partisan posturing, and outright lies. Even Dick Durbin, Democratic lapdog though he is, acknowledged that Biden “went a little too far in his rhetoric.” You think so, Dick?

Forget about Biden’s description of the January 6 protest at the Capitol as “an attempted coup . . . against the legally expressed will of the American people.” That was insane, granted, but what will be remembered is his over-the-top, shark-jumping hyperbole “I ask every elected official in America,” Biden said in one of the most cringe-making moments of the speech, “How do you want to be remembered? Do you want to be on the side of Dr. King or George Wallace? Do you want to be on the side of Abraham Lincoln or Jefferson Davis?” Oh, dear. It took about 15 seconds for House Republicans to produce a newspaper clipping in which Biden bragged about being praised by George Wallace. That was back when then-Senator Biden was a proud segregationist.

Mitch McConnell was waiting offstage with the ax: “He shouted that if you disagree with him, you’re George Wallace,” McConnell said. “If you don’t pass the laws he wants, you’re Bull Connor, and if you oppose giving Democrats untrammeled, one-party control of the country, well, you’re Jefferson Davis.”

But that was just the beginning of what was wrong with Biden’s speech. Miranda Devine provided a succinct demolition in the New York Post. The speech was, she began, “stupid, divisive and full of lies, and it also exposed his impotence.” Then she got down to business.

Joe Biden’s problem—it’s the thing that makes me feel almost sorry for him—is that so many things are spinning rapidly out of control. It’s the velocity as much as the substance of the collapse that makes it such a vertiginous onslaught.

Suddenly, his legislative agenda is in tatters. Senators Joe Manchin (D-W.Va.) and Kyrsten Sinema (D-Ariz.), both Democrats, have made sure that Biden’s “Build Back Better” fantasy is being choked down everywhere as “Build Back Bitter.” All at once, inflation, tamed for decades, is coming roaring back. It’s now running at its highest pace in 40 years. How did that happen? And how did it happen so fast? Meanwhile, Biden’s approval rating is in freefall—43 percent, 41 percent, 37 percent, 35 percent, 33 percent. You see why Stacey Abrams is keeping her distance. A president with that sort of cratering approval rating bodes ill for his party’s electoral prospects.

The stock market is trembling—what do those tremors portend?—and recent jobs reports have been disappointing. Hundreds of thousands of illegal immigrants continue to pour over our southern border, violent crime is soaring, especially in blue states. The authorities seemed paralyzed. In New York, Alvin Bragg, the newly elected Manhattan District Attorney, just announced that he was intending to allow the vast majority of people arrested, even for many felonies, to be released without bail. Philadelphia, stunned by a raft of violent carjackings, issued “guidance” to beware of hotspots:

Have they left anything out? Is there anywhere you aren’t likely to be carjacked? (Far away from Philadelphia seems to be the most likely answer.)

Meanwhile, Russian president Vladimir Putin is massing troops on the Ukraine border. Last week, a “massive” cyberattack was directed against Ukraine government websites. No one has yet taken credit for the attacks, but no one has to: everyone knows who is behind them. A prelude to an invasion? Probably. And what will Biden do? What will he do to address the “looming threat” of a nuclear crisis with Iran? How about the multifarious threats posed by China: military, strategic, and economic?

Joe Biden is looking more and more like a chap who comes home to find his house ransacked and on fire. It suddenly dawns on him, though, that it was he who set the goons to work and supplied the gasoline and matches that started the blaze.

Biden came to office through concerted, non-stop electoral legerdemain. Everyone knows this, and more and more people are coming to admit it. There are still scattered Twitter dwarfs, like Japanese soldiers decades after 1945, skirling about the “Big Lie” that the 2020 election was stolen. But what’s gradually coming into focus is the awful truth that the real “Big Lie” was that Joe Biden won the election fair and square. That narrative is unraveling strand by strand. The outstanding question is whether the country will be able to survive three more years of a deep state conspiracy presided over by an angry, incompetent, and increasingly senile puppet.

Roger Kimball is editor and publisher of The New Criterion and the president and publisher of Encounter Books. He is the author and editor of many books, including The Fortunes of Permanence: Culture and Anarchy in an Age of Amnesia (St. Augustine’s Press), The Rape of the Masters (Encounter), Lives of the Mind: The Use and Abuse of Intelligence from Hegel to Wodehouse (Ivan R. Dee), and Art’s Prospect: The Challenge of Tradition in an Age of Celebrity (Ivan R. Dee).
Photo “Joe Biden” by The White House.