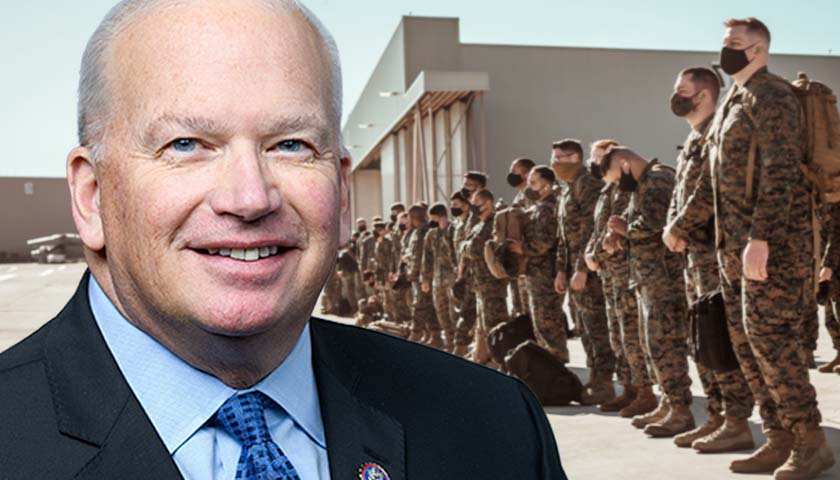 Fitzgerald shared his concerns on the floor.

“The Secretary of Defense issued a directive requiring mandatory COVID vaccination for all service members, including those in the Ready Reserve, and the National Guard. Despite the challenges this vaccine mandate currently faces in court, the Defense Department has proceeded to discharge those who refuse the vaccine,” he said.

Fitzgerald continued explaining how the G.I. Bill benefits could be on the line for some discharged service members.

He said, “To prevent those who have refused the vaccine from being dishonorably discharged, Congress included a provision in the Fiscal Year 2022 National Defense Authorization Act limiting discharges for failure to receive the COVID vaccine to either an honorable discharge, or a general discharge under honorable conditions.”

Veterans who receive a discharge from service, like many have due to the COVID vaccine requirements, “are ineligible for both Montgomery and Post-9/11 GI Bill benefits due to restrictions Congress implemented in 2011,” Fitzgerald explained.

Fitzgerald told Congress, “While this good-natured change was intended to open eligibility status to members of the National Guard, there will now be a group of veterans who have served honorably up until the point of refusing the COVID vaccine who will have their education benefits denied, and their service record diminished.”

He added the men and women being discharged for being unvaccinated are not soldiers “fresh out of basic” or are using “the vaccine mandate as an excuse to separate.”

“These are men and women who have done their time, who have paid their dues, and who have served with distinction up until the point of refusing this vaccine. Some have over twenty years of service. Others sought a religious exemption that was denied. Some may have even been planning to pass the benefits along to their children,” Fitzgerald said.

The representative continued, “And now we’re going to tell them that we don’t care how spotless their record may have been beforehand? That because they made a moral, ethical, or even religious objection to a vaccine, we’re going to deprive that veteran, or their children, of benefits and stigmatize their service record?” he continued.

His motion would have corrected the “disparity” and ensured that veterans discharged for being unvaccinated would still be eligible to receive benefits.

Fitzgerald’s website explained that the motion failed because of Democrats on a party line vote of 204 to 219.