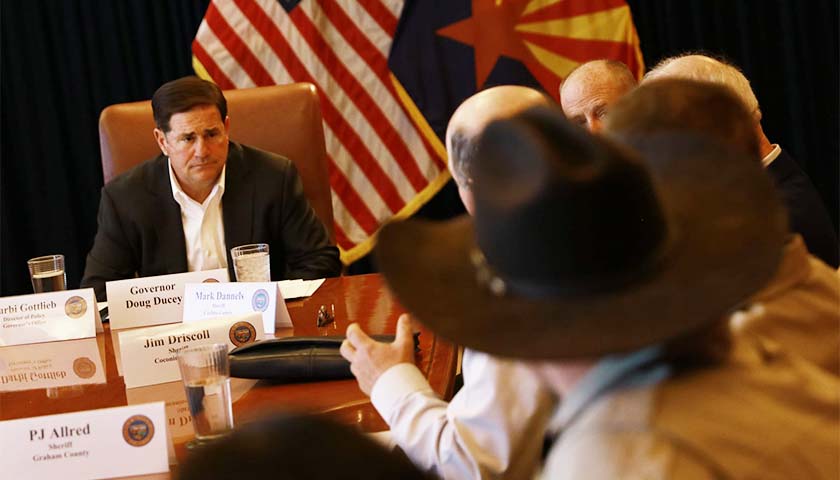 Arizona Governor Doug Ducey on Tuesday met will eleven different sheriffs from across the state to discuss efforts to secure the U.S. southern border.

“We want to work with you on this,” Ducey said to the 11 sheriffs who participated in the discussion. “Let’s get their attention.”

Previously, the governor’s office drafted a sample of federal legislation that could be introduced by either senator. The bill, the Secure the Southern Border Act, would resume the construction of the border wall, which was stopped by President Joe Biden. Furthermore, it would expand immigration courts and increase funding for local law enforcement agencies.

“Border communities are overrun with migrants who have been told that our country’s borders are open and that no enforcement will be taken against those that violate immigration laws. To remedy this situation, this act ensures a physical barrier along our southern border, requires asylum seekers who have traveled through another country to have sought or attempted to obtain asylum in the other country, requires asylum seekers to claim asylum only at a port of entry, and increases the number of immigration judges to process cases,” the draft explains.

After the meeting, the sheriffs voted unanimously to support the draft of the potential legislation.

Lamb also highlighted the increase in illegal drugs, specifically fentanyl. The drug is extremely lethal, as a dose of just two milligrams can be lethal according to the Drug Enforcement Administration (DEA). One kilogram could kill up to 500,000 people.

There were more seizures of fentanyl in 2021 than any previous year in recent times.