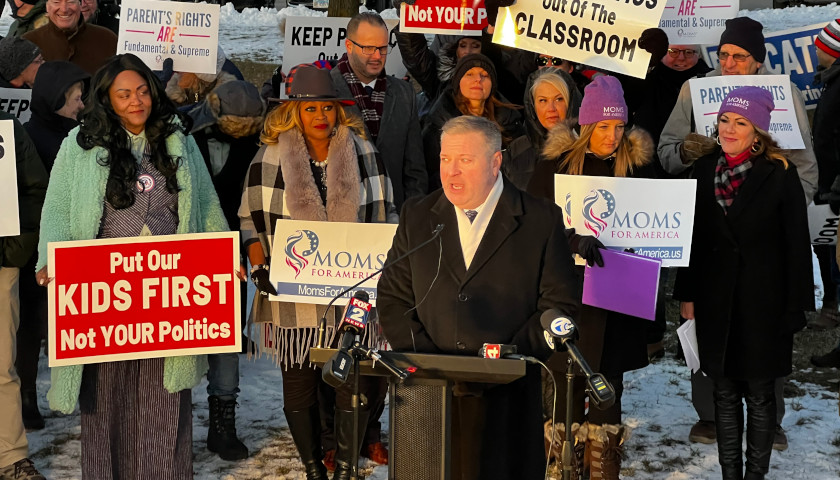 FARMINGTON HILLS, Michigan – Dozens of concerned parents protested their school system’s adoption of the “21-Day Equity Challenge,” a Critical Race Theory curriculum, at Tuesday’s school board meeting, joined by members of the Oakland County Republican Party and Moms for America.

The protesters lined the street in front of North Farmington High School, holding signs and waving at drivers, who often honked their horns in support as the sun dropped and the temperature with it. 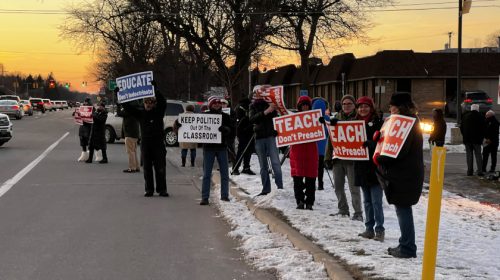 Four local television stations, news reporters from the local papers, and reporters from news sites across the country covered the press conference – proof that the fight over race-based education programming is still a hot topic nearly three months after Republican Glenn A. Youngkin leveraged the issue to win the Virginia governor’s race.

Tamra Farah, the executive director of MomForce, Moms for America’s education and school board initiative, told the protesters and media at the press event that Moms for America was standing with the Farmington School District parents.

“Your rights as parents are fundamental and supreme,” said Farah.

“It is not asking too much from our schools to focus on teaching kids to proficiently read, write and calculate, and to understand accurate history,” she said.

“This equity challenge cultivates a false narrative about America that encourages students to view themselves as either victims or oppressors. Not only is this wrong, it is damaging to kids and their relationships with one another in school and in their future careers,​” she said. ​

Tamra Farah, executive director for Moms for America’s education and school board initiative MomsForce, told Farmington, Michigan, parents that Moms for America stood with them as they protested the Farmington Public Schools’ 21-Day Equity Challenge, a Critical Race Theory curriculum. Farah said at the Jan. 11, 2022 press conference it was wrong to teach students that they oppressed because of the color of their skin and that their white classmates are their enemy.

​Farah said the 21-Day Equity Challenge teaches non-white students that their classmates are the enemy.

Debbie Kraulidis, the Moms for America executive director of production and events and hostess of the “Moms for America Podcast,” said at the press conference: “At Moms for America, we stand for the fundamental and supreme rights of parents in their children’s lives. Parents have historically trusted schools to do the job they are paid to do. Not anymore.”​​

Linda Lee Tarver, a Lansing resident and candidate for the state education board, said from the podium: “We came to engage and not enrage.”

The advisory board member on the 2020 Black Voices for Trump Coalition said she was, in fact, enraged herself at the 21-Day Equity Challenge.

“The challenge suggested that parents need to join Black Lives Matter, a terrorist organization here in the United States,” Tarver said. “We should stop the race-baiting here in Michigan. Our children have been left behind in education in Michigan.”

Bjorn Olson, a 24-year Farmington Hills resident, and father of four, told The Michigan Star that he is not involved in politics, but the 21-Day Equity Challenge surprised him and concerned him enough to speak at the press conference.

“The 21-Day Equity Challenge labeled my children based on their skin color,” the cybersecurity professional said at the press conference.

“I believed the intent of the challenge was equality, but I think it did exactly the opposite,” he said. “I’m frustrated, and I think we can do a lot better for equality.”

The 21-Day Equity Challenge was a program available for students that taught them to view the United States and its history through the lens of leftwing social justice. The program includes linguistic training in politically correct vocabulary and practical exercises, such as attending Black Lives Matter events.

Dr. Eddie Moore, Jr. created the program for 21 days, based on the concept developed by Dr. Maxwell Maltz in his 1960 book, “Psycho-Cybernetics,” where he said it took the brain and body 21 days to create the neurons needed to lock in a new habit.

Moore, the director of The Privilege Institute and The National White Privilege Conference, said on his website: “We think understanding white privilege and white supremacy is a powerful lens into the complexities of doing social justice work, so we’ve focused our resources on that specific issue.”

Many school systems, colleges, corporations and organizations have similar programs. For example, the version conducted by the American Bar Association is called the “21-Day Racial Equity Habit-Building Challenge.”

The Ann Arbor, Michigan, United Way of Washtenaw County has had more than 10,000 participants in its equity challenge programs since its launch in 2020.

The school board meeting had more than 70 speakers

In the ramp-up to the school board meeting, the Oakland County Democratic Party emailed an alert out to its community members asking them to show up for a peaceful rally backing the school board and the 21 Day Equity Challenge as a counter to the local GOP’s protest. However, there was no counter-demonstration outside.

Another distinction was that a significant number of the attendees that appeared to support Critical Race Theory, equity in the school system, and the challenge generally wore purple, and most held on to hearts cut out of purple construction paper that they waved in the air in unison to cheer on one of their speakers.

Before Farmington School Board President Mrs. Terri A. Weems opened the meeting to the speakers’ segment, she told the attendees there were ground rules.

Weems said the speakers were to address the board members as they sat at long tables on the auditorium stage, not the audience, and that speakers should not attempt to conduct a dialogue with the board since they were they to listen, not debate.

The  meeting began shortly after 6 p.m., and Weems said she would allow two minutes for each speaker.

One of the first speakers was Chairman of the Oakland County Republican Party Andrew “Rocky” Raczkowski. 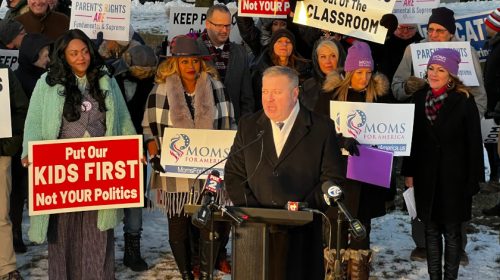 Andrew “Rocky” Raczkowski, the leader of the Oakland County Republican Party called for the Farmington, Michigan, public schools to stop its 21-Day Equity Challenge program, a Critical Race Theory curriculum, at a Jan. 11, 2022, press conference in front of the North Farmington High School. Local parents and members of Moms for America are seen standing behind Raczkowski.

The retired Army lieutenant colonel with both active-duty and reserve component service said he came to the meeting as a graduate of Harrison High School, a former state representative for the community. “I am here as a long-term resident of the district that raised me with my immigrant parents.

Raczkowski said his parents came to America from Poland, where they were held in Nazi labor camps to have a better life.

“And I stand here in disgust at what I’ve read about the 21-Day Equity Challenge,” he said. “We can put as much icing or lipstick on the pig – it’s still a pig.”

The party chairman said he and other Oakland County Republicans joined the parents in their protest against the challenge because they deserve to be heard.

“They want a seat at the table, not constantly excluded,” he said.

“I served in the military for almost 27 years and defended every right of every individual – left, right, or independent, vegetarian, libertarian, whatever – they have all have a right to be heard,” he said.

Raczkowski said he does not often talk about it, but when he was a student in the Farmington public schools, he struggled with dyslexia, and teachers were constantly telling him that he would not amount to anything.

Raczkowski said he joined the Army and eventually became an attorney and a state representative despite this negativity. “If this is not a land of opportunity, I don’t know what is.” 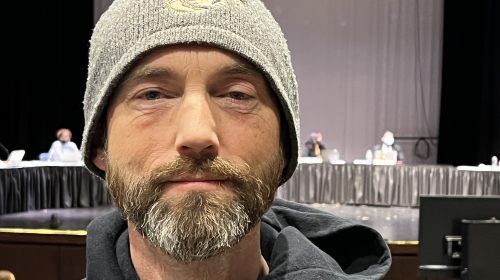 Farmington Hills, Michigan, resident and Marine veteran Mark McCauley told The Michigan Star he attended the Jan. 11, 2022, meeting of the Farmington School District board because he was concerned about what the 21-Day Equity Challenge at the North Farmington High School was teaching his daughters. McCauley said he was deeply offended that student are taught that calling United States of America a land of opportunity was a micro-aggression.

Mark McCauley, a Marine veteran, told the school board that when he served, he served in a very diverse unit, but everyone in the unit was one color, green.

The school board should focus on helping students become united in the community and as Americans instead of dividing students into groups and creating tensions between the groups.

After he spoke, McCauley told The Star the challenge curriculum motivated him to attend the meeting and speak.

“I came here to express dissatisfaction with the public schools, my daughters go here, so I have a direct vested interest,” he said.

“The 21-Day Equity Challenge included a lot of very divisive things and things that frankly were very offensive to me,” he said.

Among the parts of the challenge that deeply bothered him was how students were told that when they refer to the United States of America as the land of opportunity, it was a “micro-aggression,” he said.

“This is the country I love, risked my life for – and I’d do it again – I do love my country – and it is the land of opportunity.”

Neil W. McCabe is the national political editor for The Star News Network. Send him news tips to: [email protected] Follow him on Twitter: @neilwmccabe2.
Photos by Neil McCabe.